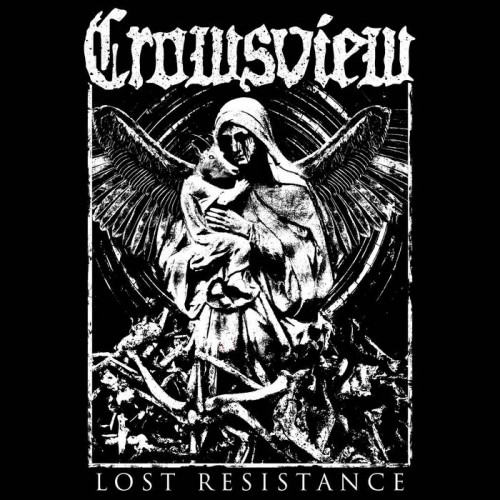 Before Crowsview I knew guitarist Dieter as the man behind the well-praised metalcore/heavy metal crossover festival Evil Or Die Fest. And last month his band Crowsview unleashed their debut album. Time to shred once again!

Lost Resistance is the first album from Belgian metalcore/thrash metal hybrid Crowsview and is an independent release. The band was formed in 2015 by former members of Core Of Anger and Deconsecrate. Although Crowsview is metalcore at its essence, it does a few things differently compared to similar sounding bands, especially in the vocal department. While a lot of metalcore acts focus on grunting and growling, Crowsview’s singer Kevin employs a vocal style that I can best describe as distant howling or… crowing! Personally I think the vocals are a bit hit and miss. On the one hand I feel this “crowing” is a breath of fresh air compared to your usual metalcore vocals but on the other hand they don’t sound as clear or as dominant as the other instruments on the album. Personally I think Kevin’s lines would’ve sounded better when they had been mixed a bit more to the foreground.
As for the other aspects of Lost Resistance, it’s clear that the band’s major strength is in how they successfully manage to produce a powerful, frantic yet also well-structured wall of sonic mayhem! It’s a mixture of harsh metalcore and melodic thrash, of Arkangel and Slayer. The guitar riffs rip and tear their way through your brain and the galloping bass and drum lines keep the frenzy well up and running until the end. The songs on Lost Resistance are short and go straight to the point. Without unnecessary introductory speeches or samples (except for one dark ambient opening sample right at the beginning of the album) and with nice variety in pacing and overall smooth transitions from one track to the next. One moment you’ll be headbanging like crazy and another moment you can cool off a little and enjoy the more melodic aspects of the album. The release is about 30 minutes in length and I went for a couple consecutive playthroughs, like a great sonic rollercoaster.

As a nice stab to Christianity the front cover of Lost Resistance depicts the virgin Mary crying black tears, sporting huge black wings and holding a goat-headed baby Jesus in her hands. Is this the birth of the Anti-Christ? Or is this a reference to Slayer’s legendary Reign In Blood album? Anyway, I love the comic book style of this front cover, it reminds me a bit of the Sin City comics!

[THE SHRAPEST SHREDS AND BLUNTEST BLADES]

While I can understand that the penultimate track MMXV serves as an opener to the awesome final track of the album, it’s soft, acoustic guitar melody feels completely out of place on an album like this! It cuts off the smooth flow I mentioned earlier and it’s so different compared to the other tracks on Lost Resistance that it has no place nor purpose on the album! I’d rather have heard a short heavy guitar instrumental, that would’ve have served as a much better intro to Beneath The Flesh. Speaking of…
Lost Resistance’s final track, Beneath The Flesh, is a badass finale wherein the Crowsview guys offer their full musical potential for all to hear! Thunderous breakdowns, hard-pounding rhythms, snarling vocals and ending with some epic guitar work that makes me begging for more as the song slowly fades away! In addition, I love the catchiness and roaring riffs of the album’s third track, Burn It Down, featuring guest vocals from Ross Demon from Length Of Time. Well, that’s all I’ve got to say, almost!

7 black tears out of 10. Crowsview’s debut release was a fun little piece of thrashing metalcore for me to shred through! I believe with a bit more melody and clearer mixed vocals Crowsview can bring a lot to the table for thrash and metalcore fans everywhere. This first iteration already offers a sweet taste of their musical prowess and I look forward to hear how Crowsview will evolve! Here’s the album’s sixth track, Face Your Supreme!