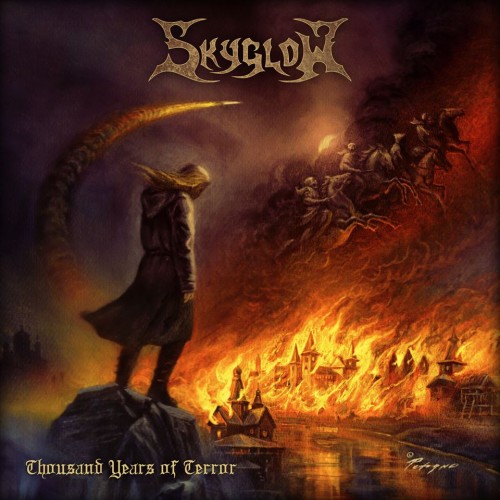 Thousand Years of Terror is the debut album of the Russian progressive black metal band Skyglow, formed in 2016. It is released through Inverse Records & Grotesque Sounds Productions and consists of six tracks for a good 45 minutes of playtime. Although Skyglow’s sound is mainly inspired by the likes of as Dimmu Borgir and Coroner, the band does add a unique flair to their material thanks to the large musical and atmospheric variety they’ve put into this release. Moody acoustic guitar melodies and sweet piano tunes tag along with upbeat electronic guitar riffs and aggressive double bass drum beats, creating a dark yet at the same time adrenaline pumping feel. Add to that a ton of epic guitar solos and raw yet crystal-clear black metal vocals and you’ve got yourself a sweet progressive black metal package that everyone can enjoy!

From a thematic standpoint, Thousand Years of Terror puts a lot of emphasis Skyglow’s home country of Russia. The rise of the Bolsheviks and communism in the late 1910s, religious oppression from the Orthodox Christian church, the ongoing conflict between Russia and Ukraine and the mass-corruption of the Russian government. But the overall energetic and combative feel of the album does hint that Skyglow is ready to burn the house down! Literally, in fact! The album’s front cover depicts a burning city with the Four Horsemen of the Apocalypse themselves flying away on a cloud of pitch-black smoke!

My favorite songs on Thousand Years Of Terror are the album’s third track called Losing Humanity and the closing instrumental track named …And The Circle Closed. Losing Humanity is a near nine minute track of epic symphony wherein Skyglow unleash their entire musical arsenal. Acoustics, piano, black metal and symphonic metal vocals singing in duet and impressive guitar work playing alongside the sounds of thunder and modern warfare. …And The Circle Closed functions as a perfect ending track as it offers you one fast and heavy metal dance that slowly fades out of your speakers without losing any of its sonic ferocity. It leaves you begging for more! And I sure as hell am begging for it!

Overall, Skyglow’s Thousand Years Of Terror offers a damn great first impression from a duo of young, talented musicians from Moscow and I’m confident the band has a bright creative future ahead of them! I’m very happy that Stijn “Metal Shredder” Daneels has given me this album and I’ve already told him to include Skyglow on one of his next Shredder Sundays! In the meantime, you can enjoy the opening track from Thousand Years Of Terror! Sacred Self-Deceit!