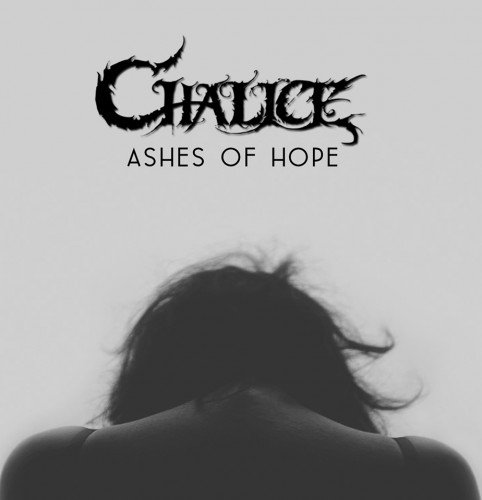 Throughout my years of shredding, I saw the name Chalice appear quite a few times on event posters and via Facebook invitations. It eventually took me till last June that I finally aimed my sights on this band. And quite right on time, actually, since Chalice were in the midst of celebrating their 20th anniversary and they had started the festivities by releasing a new album. And it was, of course, Mike De Coene from Hardlife Promotion that put this baby in my hands. Let’s dive right into them ashes!

Ashes of Hope is the fourth album from the Kortijk based death/thrash metal hybrid Chalice and is an independent release. The album mainly blends together influences from classic death and thrash metal acts such as Testament and In Flames. In Ashes Of Hope Chalice put great emphasis on brutal yet very melodic riffs, creating a dark and brooding atmosphere. Most songs on the album are over 4 minutes in length and feature plenty of instrumental parts in between Pieter’s vocal sessions. Speaking about vocals, Pieter has three distinct vocal styles in Ashes Of Hope. One style is black metal like shrieking, the second is gravely grunting as in old-school death metal and finally he provides some clean lines, mostly through a moody monologue. He frequently switches between those vocal styles (in particular in the track Cult Of Serpents) and you can feel the raw emotions of pain, anger and sorrow in his voice as he tells tales about depression, mental isolation and suicide. Since Pieter is a real life mental health support worker (he told me that during the interview I did with the band) I tend to believe that many of the lyrics in Ashes Of Hope are based off the lives of the mental patients he has worked with over the years. Other than that, I love the crisp audio quality in Ashes Of Hope. Every drum beat, bass line, guitar riff and grisly growl hits with an equal amount of ferocious clarity! It all comes together to create a compelling set of tracks that’s easy to get your teeth into!

On the front cover is the back of a woman’s head slightly bent forward and seemingly full of grief. Other images include the front of a crashed airplane, a girl standing in front of a ladder going all the way to heavens (Stairway to Heaven reference?) and some mountains that remind me of the iconic skybox from the first DOOM episode Knee-deep in the dead. But one particular thing I love about the artwork are the various shades of grey or, more specifically, ash! It gives a sense of depth and intrigue to the artwork and makes Chalice’s logo stand out beautifully! I’m impressed how the band created such awesome artwork using only a few basic pictures and two main colors. It’s a perfect example of the philosophy that sometimes less can be a lot more!

The album’s first three tracks are badass tunes and they’ll sure leave their marks on your brain. The epic guitar riffs from opening track Amongst The Damned, the aggressive speed of its successor The Age Of Fear and finally the catchy, barbaric melodies and vocals of the third song Eternal Sleep. Unfortunately, this winning streak got broken at the fourth track, Musings On The Bank. It can’t help it, but that song just came and went without leaving any significant impression on me. Good thing a few more great tracks came up afterwards such as Cult Of Serpents and the Black Sabbath inspired finale called A Death Without Warning, which deals with suicide through wrist cutting. I particularly love this final track because of its dreary yet restrained rhythms and vocals which, combined with its dark subject matter, makes this song all the more disturbing.

8 ash clouds out of 10. With top notch production values, versatile vocals and engaging tunes, Chalice’s latest release serves as a sweet 20th birthday cake that we can all take a big bite from! Ashes Of Hope is an excellent effort from a veteran metal band that, hopefully, will be heading into another 20 years! At least they’ve got off to a good start! And now you can finish your read with Ashes Of Hope’s opening track!
Chalice - Amongst The Damned