One man, one mission! 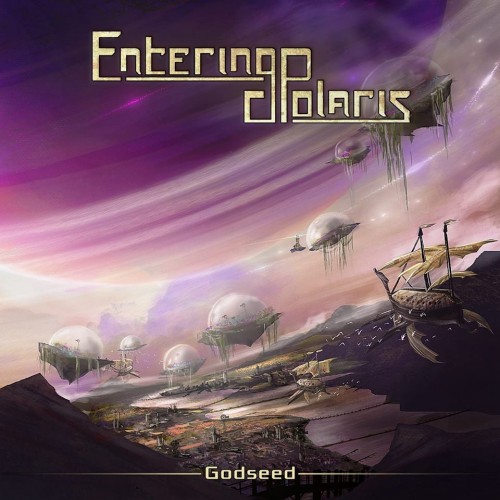 I received a promo copy of Godseed from my good friend and business partner Mike De Coene from Hardlife Promotion. Over the past few years I got a lot of great underground material from Mike and this case was no exception. Let the shredding begin!

Godseed is the debut album of Tom “Tee” Tas’s solo project Entering Polaris, the album is released under Dutch record label Freya Records and distributed by Dutch Music Works. Entering Polaris is one of two solo projects by Tom “Tee” Tas (the other being In Motion). Tom is best known for his work in various rock and metal bands like 23 Acez, Thorium, Quantum Fantay, Neo Prophet and Ostrogoth. Entering Polaris’s first release features nine songs that Tom has written over the years. The material on display here is an interesting blend of classic heavy metal with progressive and power metal with influences ranging from classic metal acts like Iron Maiden and Helloween to more experimental artists like Blind Guardian and Ayreon. It’s a huge, varied package with beautiful virtuosic guitar riffs from Tom, groovy drum beats from Vincent Van Kerckhove and a plethora of vocalists including Henrik Fevre (Anubis Gate), Thomas Vikström (Therion), Lance King (Balance Of Power) and Audrey Dandeville (Irradiance).
The real star of this album, however, is Tom himself. He constantly unleashes one awesome guitar riff or solo after the other and his songwriting is catchy and tight! One other element that makes this album so enjoyable is the excellent pacing. For the most part, the songs on Godseed are fast and energetic without sacrificing the overall melodic feel of the album and at the right moments the music slows down to allow for some breathing room, allowing the melodies and vocals to really sink into you. Adding in some saxophones and acoustic guitars and that appear in some songs and you’ve got yourself an album that can appeal to many rock and metalheads the world over!

A bizarre cocktail between sci-fi, steampunk, and pirate themes functions as Godseed’s cover art. There are pirate ships flying above a industrial era farm field and river and up high in the sky there are futuristic island cities floating around, covered by white domes and vines hanging from the sides. Somehow those islands make me think of jellyfish and the entire scene reminds of the classic Sega Dreamcast game Skies Of Arcadia. In any case, it’s a colorful yet also mutely colored image and I wouldn’t mind making a large painting of this cover and putting it in my living room (if only I could draw, let alone paint). And I’d also love to know how Tom and his guys came up with this.

I’ve got several favorites here. First off the badass opening track Nostalgia For Infinity (I love an opener that straight on takes you by the throat). Then the two tracks with Thomas Vikström (which are It’s A Good Day For Burning Witches and Godseed’s title track) for their fast, rollercoaster like feel and his suitable roaring vocals. I also loved the sweet and sincere power ballad A Song Of Distant Earth and the awesome vocal ensemble in Paradise Reclaimed (with clean male and female vocals as well as grunts). And last but not least there’s the last track by the name of The Long Run, a song that puts together all the elements and almost all vocalists you’ve heard earlier in the album for one epic finale!
However, there’s one thing I wish that Tom included in his first Entering Polaris album, and that is a song with only female vocals. Sure, Audrey Dandeville sings some lines in the song Paradise Reclaimed but I wished that she or some other awesome female vocalist had the opportunity to claim one song all for herself. It would’ve made the entire package even more varied. But still, it’s just a personal preference and I’m sure that we haven’t seen the last of Tom’s solo outings. That being said…

8,5 jellyfish islands out of 10! I’m beyond impressed that this entire album was pretty much made by a single person and that it ended up being as good as it is right here! Godseed is an ambitious, varied and awesome first solo outing from Tom “Tee” Tas and I’m very curious to shred through the debut release of his second solo project (which is called In Motion and its debut release, Thriving Force, is slated for release in November)! But for now, you can enjoy the epic ensemble song Paradise Reclaimed!