Live it out loud! 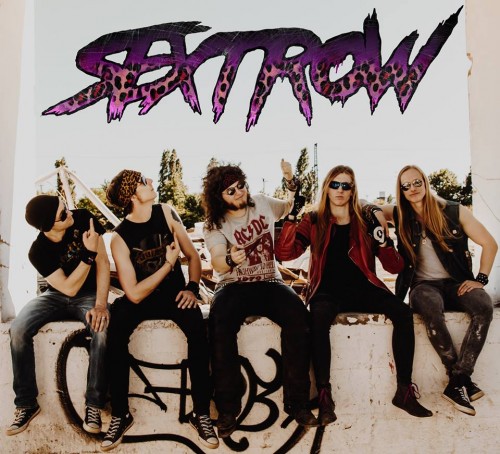 My first encounter with Sextrow was a sweet coincidence. I met guitarist Magic Marv at WildFest 2018 in Geraardsbergen where we both were waiting to get a hamburger! He needed transport for him, his girlfriend and their other friends to recreational resort the Gavers and since I knew the area I drove him and his posse over there after the festival had wrapped up. As a sign of gratitude he later sent me Sextrow’s debut EP and that’s what I’m shredding right now!

Bitchfield is the first EP of the Cologne based hard rock act Sextrow. It’s an independent release and features five tracks for a good 20 minutes of playtime. Right from the start you can hear the band’s main influences come from classic hard rock acts like Mötley Crüe, Judas Priest, Whitesnake and AC/DC. Hell, the EP’s third track, “Blue(s) Pills” has a very similar structure and pacing to the iconic AC/DC song Whole Lotta Rosie! The main highlight from this first iteration of Sextrow is the guitar work, both Magic Marv and Reckless Rob do some great technical guitar solos throughout the release and together with Crazy Chriz bass and Mighty Mat drum lines they mostly succeed in giving the EP some legit 1980s hard rock charm. On the other hand, I didn’t like Inglorious Ian’s vocal delivery. He brings plenty of catchy choruses, but his overall finesse doesn’t stand out as much compared to the other band members. His vocals in Bitchfield feel phoned-in and uninspired and I think he’ll do better if he were to expand his vocal range and add some more power and conviction to his delivery. At times he does hint at a more varied vocal range but it isn’t there yet. But I’m optimistic and I hope he’ll be able to rise up to the challenge in further Sextrow releases.

A simple front cover featuring the five Sextrowers present on this EP. The band’s logo is in purple leopard print, personally I’m not a big fan of the design (I would’ve removed the leopard print and just go for the many shades of purple) and I wished all band members looked at the camera, holding each other shoulder by shoulder, just like Marv is doing. That way they would’ve looked more like a true band of brothers, now two of them look up as if they see a pair of tits hanging in the air.

While Bitchfield’s opening title track was a fast, blood-pumping good start of the EP, the honor for best track on the EP goes to the second song, Live It Out Loud! It’s one of the slowest tracks on the album, but it sticks out from the rest of them because of the epic opening melody and its efficient use of rhymes (giving the song a very smooth and rhythmic feel) and because of the extremely catchy chorus. It feels like a true rock n’ roll anthem and I hope Sextrow will be making more songs like those two I mentioned here. It fits them like a glove. The same thing, however, cannot be said about Bitchfield’s forth track, My Foxy Lady. The band attempts to go for a more blues and sleaze rock style but, aside from a catchy chorus, it felt dragged on in my opinion.

6 Foxy Ladies out of 10. A nice effort from a very young German hard rock act that shows off some good traits in their first release. Although the band commited a few missteps, I do feel that given time and consistent improvement, Sextrow can become a truly enjoyable band for hard rock fans everywhere! Here below you can watch a making of video of the EP. Enjoy!