Gravy of your blood, forced down through your throat! 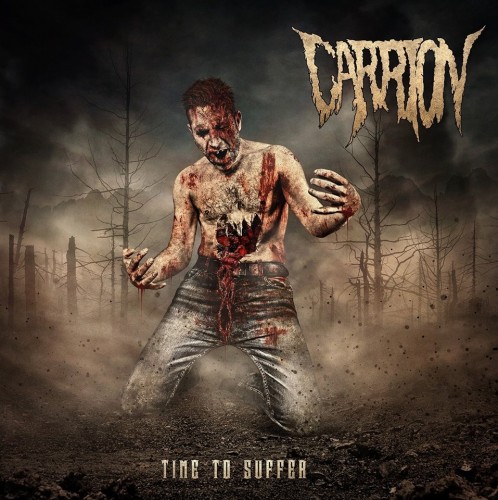 Carrion was one of the first bands I laid my eyes, ears and hands on (ok, that last one isn’t that accurate) when I began shredding my way through all rock and metal back in 2015. I bought their debut release, enjoyed shredding it and I quickly became friends with guitarist Mathieu Vander Vennet. A mere year later he already began hyping me up for his band’s follow-up album. Well, it’s finally here! Let the long awaited shredding begin!

Time To Suffer is the second album from the Ghent based gingercore band Carrion. It succeeds their 2012 debut release Revelations and is their first album distributed by Danish record label Mighty Music. Carrion describe their music as gingercore, but why do they call it after the red-haired race? That’s a little inside joke but Carrion’s sound feels like a balanced mix between old-school death metal and modern day metalcore. It’s a multi-faced beast with abrupt tempo changes, razor sharp guitar riffs, brutal bass lines, blast beats, grunts, growls, screams and everything else you can think of if you know those two subgenres. But underneath all that viciousness you can clearly hear a band with a tightly structured and flexible play style. It’s a polished experience with sonic brutality carefully balanced off by slower, moodier tunes. Add to that some shrieking solos and that’s gingercore for you!

On the front cover there’s a bare-chested ginger man with half his face ripped off and his intestines hanging out from his torn open stomach! It’s a realistic and gruesome image, but it doesn’t look that horrifying either because of the toned-down colors. A very accurate visual representation of Carrion’s sound. Brutal, but stylish. As for the lyrics, well, don’t read them if you’re the squeamish type as some of the lines Carrion have come up with are explicit and disturbing! This review’s title is just one of the several ghastly phrases you’ll hear in the album! The songs on Time To Suffer deal with such family friendly topics like cannibalism, pestilence, warfare, denial of the afterlife and serial killers ready to put a chainsaw to your throat! Speaking of chainsaws…

In a track reminiscent of the Texas Chainsaw Massacre, the album’s fourth song Urge is a ferocious song that cuts through your brain with guitars that sound like roaring chainsaws! Throw in some samples of people screaming in pain and flesh getting ripped open and you’ve got one damn great slasher flick tune!

Death From Deep Within, the album’s second instrumental track, felt repetitive and didn’t add any effective introduction to the next track, which is Torment. It’s weird to say this because I’m usually a sucker for instrumentals, but in this case, I’d have left that instrumental out of the album because Torment is a good enough track on its own and much better shows off Carrion’s major strength of fast-paced death metal inspired shredding!

7 zombie gingers out of 10! For more than a year, Mathieu had been pumping me up for Carrion’s second iteration and it didn’t disappoint! While their debut release Revelations already hinted at the band’s potential, this album further drives the point home that Carrion are becoming a force to be reckoned with to gingers and non-gingers alike! I’m curious to see how they will evolve from this! But in the meantime, here’s Time To Suffer’s final track, In The End, There’s Only Death!