Take a shot! No excuse! 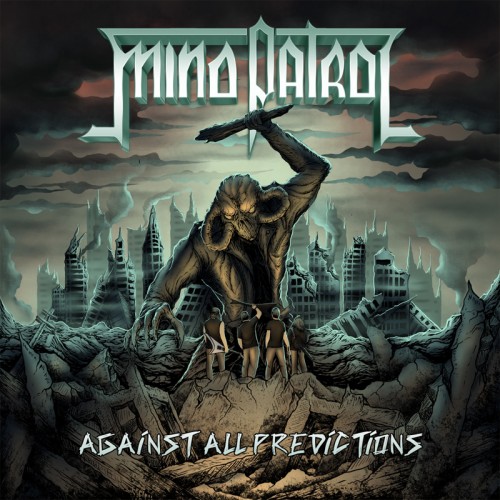 I first met team Mind Patrol at a free metal festival called Paul’s Metal Fest in August 2015. The event was organized and co-headlined by Mind Patrol and by my buddies from Turbowarrior Of Steel. I interviewed and remained in contact with both bands over the past three years and I was very excited when Mind Patrol told me they were prepping up to release their debut album to the masses! And I’ve waited a long time for this one!

Against All Predictions is the first release from the Swiss speed and thrash metal hybrid Mind Patrol after their formation in 2012. It’s an independent release with seven tracks for about 30 minutes of playtime. For the most part, Mind Patrol’s style features fast and heavy galloping bass and drum beats, epic and technical guitar riffs and snarling catchy vocals. In particular the songs Till We Die and the Drinking Song were quick to get stuck in my head but the other tunes had some sweet melodies of their own. Throughout Against All Predictions the band adds some variety by switching frantic shredding songs with more instrumental focused tracks. Overall, Mind Patrol has a similar sound and feel to my fellow countrymen, the aforementioned Turbowarrior Of Steel. Both are true party thrashing bands, have catchy songs and mix serious business with light-hearted fun and comedy.

I also have to give huge credit to producer V.O. Pulver and Little Creek Studio for the outstanding audio quality on this independent debut album. Everything on the album sounds balanced and solid and packs a great punch! One thing I feel that could be improved in Against All Predictions is its overall length and pace. As I mentioned earlier the album has several awesome highlights but there are a couple of tracks and sections that feel like unnecessary filler to me. Personally, I think Mind Patrol fares better with shorter and faster songs. So let’s dig deeper into the highs and lows of Against All Predictions now!

Without a doubt, “Till We Die!” It’s a badass track that shows off Mind Patrol’s major strengths! From the bombastic opening melody to the memorable and raw vocals, the frantic yet still balanced pacing and the awesome guitar solos, it’s one hell of a rollercoaster! It’s a short track compared to the rest of the album, but it’s damn good! Another favorite of mine, “the Drinking Song,” for similar reasons actually. A chorus that remains permanently stuck in your head (TAKE A SHOT! NO EXCUSE!), awesome guitar work and a well-paced song structure. I can almost feel the atmosphere of a brutal beer drinking, head banging and mosh inducing metal party! The only party pooper is the sound of a guy vomiting at the end of the track! Maybe Mind Patrol tried to be funny but I’d much rather have the song end with frontman Yves yelling something like “DRINKS ARE ON ME,” followed by a huge roar from the same crowd that you hear at the beginning of the track!

And finally I really enjoyed “Doomsday,” especially the long instrumental parts that form the second half of the track. They have such an epic and heroic feel and kind of remind me of early Metallica or Megadeth. I really hope the guys will be making a full-on instrumental track in their next release! As for the weakest tracks, I didn’t like the album’s opening track “Intro (Welcome To Hell).” The track doesn’t build up to anything, they’re no guitar solos to speak of and Yves’s vocals are a slow and dreary whisper. It doesn’t fit the band at all and it feels out of place compared to the other songs on Against All Predictions. That why on later listening sessions I was quick to skip to the second track (the aforementioned “Till We Die”) which is a much better opening tune!

The front cover shows a ravaged city with team Mind Patrol facing off against a huge, hellish beast! Actually, this monster reminds me of the Baron Of Hell from DOOM! Too bad he isn’t throwing green fireballs all over the place. One small detail I love about the artwork is how vocalist Yves is staring straight into the eyes of the creature and is pointing his finger at it as if to say, “take your best shot, fucker!” A bit foolish given the David VS Goliath situation! But still fucking badass! And who knows, maybe Christian’s guitar is in fact a plasma gun, Emil’s bass is a super shotgun and Matthias’s drum stick is a rocket launcher! And somewhere in his shirt, Yves might be holding the BFG 9000! Ok, I really need to play DOOM again! As for the overall themes, you can expect both dark subject matter like war, the end of the world and mental instability and the lightheartedness of partying, drinking and fucking! In no particular order.

7 Bruiser Bros out of 10. Despite a couple of filler tracks, I can confidently say that Mind Patrol, against all predications, clearly prove that they aren’t just another bunch of youngsters trying their hand at playing in a metal band. They have some rough edges, but given time, experience and constructive feedback, these four guys have the potential of becoming a true gem in the Swiss metal scene! But don’t take my word for it, just listen to “Till We Die!”