Grab'em by the nutsack! 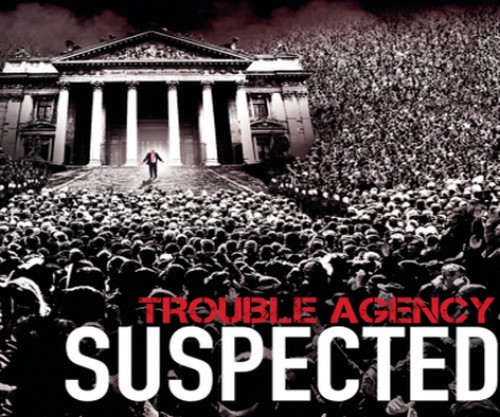 I’ve got Trouble Agency’s Suspected from my good friend and awesome Dutchman Mike De Coene from Hardlife Promotion! I’ve got to admit that he was particularly stocked to have Suspected’s promo version shared to all his media partners and knowing Mike, if he’s really enthusiastic about something, it must be pretty damn good. And given the fact that Trouble Agency won the 2014 Wacken Metal Battle Belgium my own interest was certainly sparked. Let’s check this one out!

Suspected is the second full-length release from the Brussels based thrash metal quintet Trouble Agency, formed in 1993 from the ashes of such well-respected Belgian bands such as Cyclone, Decadence and Necrosis. It’s an independent release with 10 tracks for a lengthy 50 minutes of playtime. I can easily describe Trouble Agency’s overall style as follows, think of any iconic 1980s Bay Area thrash metal act and you’ve got a pretty good idea of what Trouble Agency are all about. More specifically, I’d say the band takes cues from Anthrax, Suicidal Tendencies and a touch of Slayer. So you can expect a blend of fast headbanging beats mixed with long and technically profound guitar work and snarling vocals. I’d got to say that those long instrumental parts are one of the album’s biggest highlights! They breathe Testament and Megadeth and they make sure that the overall lengthy songs (most of them are between well over 4 minutes) don’t feel as long as they may sound on paper.

In fact, the entire album feels well-paced and balanced. Some songs such as Tears Of Blood are slower and more guitar focused while others like Suspected’s title track put more emphasis on speed and raging vocals. Speaking about vocals, I love singer Kevin’s vocal style! He’s got a natural rawness in his voice without sounding exaggerated and he’s also capable of extensive screaming as he proves in the album’s fifth track Back Off! And finally there are Suspected’s high production values. It’s surprising to hear how crisp and well-rounded everything on the album sounds despite being an independent release! Solid bass lines, heart-pounding drum beats, crystal clear guitar riffs and catchy vocal lines! It’s all here! But the band didn’t just go all out on the audio part, they also took well care of the visuals…

On the front cover you can see a building that looks like something from Wall Street with a blond-haired man in a black suit and a red tie (hmmm… looks familiar) giving a speech to a huge crowd. I must say that the overall lack of color (expect for the guy in the suit, who is fully colored) is quite effective. It represents the facelessness of the massive audience, all worshipping the suited person who stands illuminated in the middle of the scene. In addition, the band released the album in a stylish and sleek digipak complete with a fully detailed booklet. They spared no expense! As for the album’s themes, since Trouble Agency are a typically 1980s Bay Area thrash metal band you can expect typically 1980s Bay Area topics such as politics, religious extremism, anarchism and other socially and politically engaged stuff. Yeah, it’s nothing new under the sun when it comes to lyrical content, but it fits Trouble Agency’s musical style so I’m not bitching about it!

I’ve got several favorites here. For one, I really dig the hardcore influenced and bass heavy songs Survival Of The Fittest and Banksters a lot! They’re both catchy and badass tracks that showcase Trouble Agency as an all kills, no frills band! They’re not afraid of telling you where they’ve taken their inspirations from and worship those influences with genuine love and respect.
As for my bluntest blade, well, it isn’t any particular song but rather the lack of a great lengthy instrumental. Trouble Agency have treated me to some awesome instrumental parts throughout its latest iteration and I really wished they would’ve wrapped it all up with a long, badass instrumental like Metallica did back in their early (and best) years with such iconic tracks like Call of Khutulu or Orion! But as it stands, this album more than deserves…

8 suspected trouble agents out of 10! It took a while for Trouble Agency to get back on their feet as a fully formed band but I’m very happy to see a band with legit power and confidence and I’m glad that Mike from HLP has once again introduced me to another great band from my own country! With excellent production values, full-throttle thrasher riffs and commanding vocals, Trouble Agency’s Suspected is a true love letter for any fan of 1980s thrash metal. So scroll down and enjoy Trouble Agency playing Suspected’s title track live at Wacken Open Air 2014!