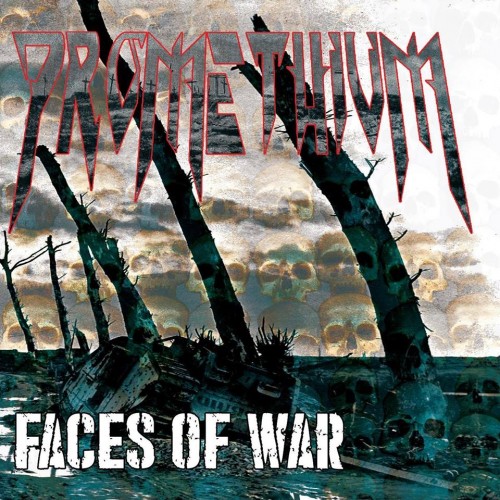 A couple of weeks ago I met the British boys from Promethium at Jeugdhuis Asgaard where they played alongside Belgian thrash metal act Objectör. Both me and the audience were impressed by their energetic and captivating performance and shortly after their show I introduced myself to Promethium. They gave me a free copy of their latest album Faces Of War in exchange for a review and so it’s now time for me to return the favor!

Faces Of War is the third full length release from the Lancaster based heavy metal band Promethium. The album is distributed by Load4 Records and consists of 10 tracks for a healthy 40 minutes of playtime. In terms of style Promethium plays a mixture of old-school heavy and thrash metal. It combines elements from acts like Iced Earth, Pantera and Black Sabbath and as a result you get an album with mid to fast-paced hard-hitting riffs, memorable guitar solos, catchy lyrics and howling vocals. All of that stuff combined gives the songs an aggressive yet also a tragic undertone. In addition Henry and Rossi frequently provide backing vocals in which they repeat certain parts of the lyrics in a raw, growling voice and so creating a nice echoing contrast between Steve’s clean, high-pitched singing. Faces Of War isn’t a long album and that’s a good thing since the band’s style fits perfectly for short, fast-paced songs and in Faces Of War they definitely play to their strengths. The songs are tightly woven together and all bands members shine throughout the album in their own respective ways.

Faces Of War is a concept album and as its title suggests, the concept is the horrors of modern warfare! The mass slaughtering of the youth on the battlefields, propaganda (including one song dealing with the Holocaust), the threat of nuclear warfare, post-war trauma and more are all discussed in Faces Of War. It’s horrifying to think how much war has changed over the past 100 years ever since gunfire, airplanes, nuclear bombs and mass media propaganda have come into play! As a result, war has become all the more destructive and all-encompassing for it. And with Faces Of War Promethium present the gruesomeness of worldwide conflict in all its “glory.” And the band also took well care of the visual department for Faces Of War. In the booklet every song has its own page and adequate picture. I particularly like the collage they made for the title track. It shows various soldiers (both male and female and from various ethnic groups) looking weary at the camera, the strain of battle in their eyes. An effective visual representation about how war effects everyone, no matter what age, gender or race.

One of my absolute favorites on Faces Of Wars is the fourth track, Shell Shock. The song has a style and structure that reminds me of the Iron Maiden classic Remember Tomorrow. A slow and melancholic melody that frequently gets overtaken by a thunderous riff! The same goes with the vocals, during the moody parts Steve sings in a broken-down voice but with a hint of repressed anger. And that anger fully explodes during the louder parts of the song! It’s a truly compelling track that gave me chills when I first heard that song during Promethium’s live gig at Asgaard. From that moment on, I knew I had to buy that album! Although Enemies Fate isn’t a bad track by any means it isn’t that good of an opener, especially not when compared to the catchy explosiveness of its succeeding track Declaration. Personally I would have opened the album with a short 2 minute instrumental (a great way for Dan and Rossi to show off their guitar shredding skills) in which the song’s riffs are played alongside the sounds of war. Men screaming in pain, other men yelling orders, gunfire, explosions, sirens, etc. And then I’d transition into the song Declaration and let Steve come up and yell the phrase THIS IS WAR just as he does in the track itself. I think that would’ve made for an epic start of this album. That being said, this album still more than deserves…

8,5 brave soldiers out of 10! With this third full-length release Promethium have more than clearly proven that they’re an underrated force to be reckoned with. Faces Of War is an album that I can wholeheartedly recommend to anyone looking for all kills, no frills heavy metal! No need to press F to pay respects, just check this band and album out! And check out the album's fourth track, Shell Shock, below!