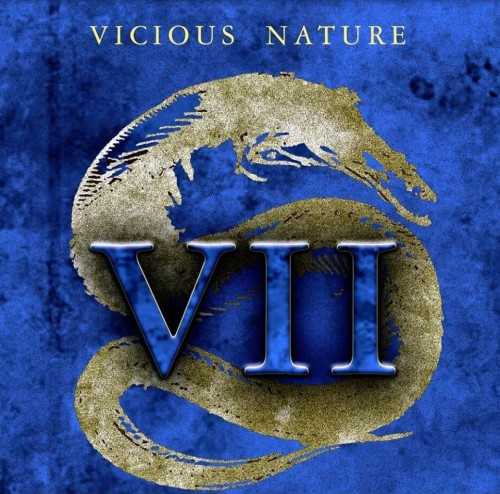 I first met the guys from Vicious Nature during Wizzfest 2016. I remember being very satisfied with their rather short but hard hitting performance and I ended up buying both their EPs as well as their live EP Live In Belgium. Yup, these guys love my country so much that they even recorded a live performance in the very same venue where I was standing none the less! Fast-forward two years later and guitarist Andrew offered me to review his band’s latest EP release, called Seven. Could this be a lucky one?

Don’t let the name confuse you, Seven is the third EP from the British heavy metal quartet Vicious Nature. A band formed in 2012 out of the ashes of Marshall Law, Cloven Hoof and Cerebral Fix. This EP is slightly longer than their previous two releases, clocking in at 25 minutes, featuring five studio recordings and a live track of the previously unreleased track System Of Disorder. Recorded in 2015 at, you guessed it, in Belgium! After a short and gentle sounding opening instrumental, the band kicks into high gear with their typical combination of heavy, power and thrash metal. Andy’s raw but still operatic sounding vocals (his voice reminds me a bit the late legendary Ronnie James Dio) are sharply contrasted by the harsh guitar riffs from Andrew and the thrash metal inspired rhythms from Marc and Jon all crammed together into typically heavy metal song structure with catchy choruses and beautifully technical guitar solos. One definite improvement over Vicious Nature’s previous two EPs is the overall production value and sound quality. This time all instruments feel equally strong and sound clearer overall, nothing is mixed over anything else and this makes Seven feel more professionally made. This is an EP done with love and knowhow and the same can also be said about the album’s artwork, which I’ll discuss in a minute.

Like most of Vicious Nature’s material, the songs on their new EP have both dark and optimistic themes. One song is sung from the perspective of a serial killer while another track encourages you to rise up to your feet and fight. As for the artwork, man, what an improvement compared to their earlier releases! Gone is the bland cover art from their first two EPs (which only featured the band’s blood dripping logo on either a plain black or a plain white background) and now you’ve got a stylish blue front with a golden dragon circling over the Roman numeral VII with band’s logo written in a golden font on top. Although simple by design, it does have a majestic feel to it. It looks like something you’d see on a noble family crest, proudly representing its house, or in this case band, in all its glory!

The EP’s fifth track, The Silence That Kills is my favorite. It’s an excellently paced and balanced song wherein the guys throw all their cards on the table for a badass and catchy tune. The song’s chorus in particular is quite mesmerizing. The same thing applies to the preceding tune, the aggressive yet also quite upbeat track Psychotic  As for Seven’s biggest weakness, I’d say that aside from these aforementioned tracks the songs on Seven feel a bit dragged on in my opinion. The lads at Vicious Nature have always had the habit of writing songs that are mostly over 4:30 minutes long but I believe they’ll be better off with shorter, tighter material as is the case with The Silence That Kills.

7 family crests out of 10 (what a coincidence)! Vicious Nature show clear improvement in their studio recording and song writing skills in their third consecutive EP. If you’re looking for some old-school heavy and thrash metal then show this band some love and check out this sweet EP. I’m very curious to see how Vicious Nature will evolve in the following years. Hopefully they’ll eventually unleash a badass full length release that manages to fully convert their awesome live on stage power into CD format. Maybe a full live album recorded in Belgium! Should that ever happen (very likely, I believe), I’ll give them all waffles, chocolate and a ton of Westmalle beer! But for now, enjoy arguably the EP’s best track here below, The Silence That Kills!