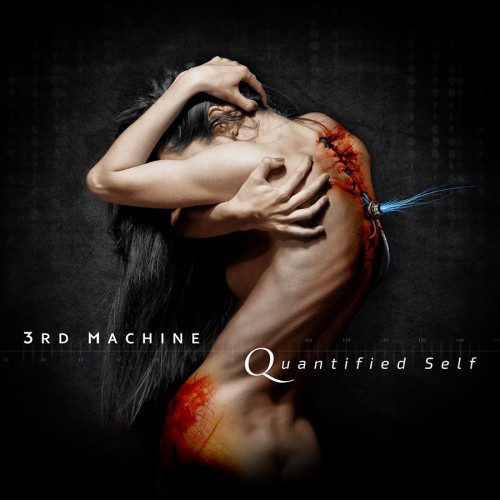 3rd Machine was a band suggested to me by my good friend Isabelle “Blackbelle” Jonckheere from Metal Fun. She introduced me to 3rd Machine’s vocalist John Ruiter who was eager to send me a copy of his band latest album, Quantified Self! Time to upload this baby into the Shredder mainframe!

Quantified Self is the first full length release from the Dutch groove, progressive metal hybrid 3rd Machine and distributed by Into The Limelight Records. It’s 9 tracks long for about 51 minutes of playtime and features guest appearances from Rebecca Duin (vocalist of heavy metal band Thoughtless), Pieter Bas Borger (known for his mixing work for acts such as progressive metal band Hillsphere) and finally none other than Mark Jansen himself (yes, the grunting guitar shredder from Epica and MaYaN). At its core, 3rd Machine is a groove metal band, similar to the likes of Pantera and Machine Head, however, these Dutchmen also inject a good dosage of progressive metal into pretty much all of the album’s tracks. A particular song may start with hard hitting beats and grunts only to cool down in the middle with a gentle melodic metal section and natural vocals before getting the groove ball rolling again! Because of these sudden transitions, 3rd Machine’s material has an unpredictable feel to it with helps to keep you engaged throughout the album’s lengthy songs (most of them are well over 5 minutes long). And with the occasional ambient industrial music parts the songs also feel a bit futuristic and sometimes even a bit threatening. Something that would fit in a FPS game taking place in a dark sci-fi world like that of Blade Runner. Personally, however, I still feel that the songs could’ve been made a bit shorter and more tightly written. In the end, you could say that 3rd Machine is Panterÿche. Yup, Pantera meets Queensrÿche. And all things considered, it’s pretty damn good.

The main theme throughout Quantified Self is the increasingly digitalized world we’re living in. The fear of humankind working itself into redundancy because of the more and more advance machines and artificial intelligences we’re creating. Our privacy that’s gotten hugely exposed due to the rise of the internet and social media. Personally I often think about such subjects. Are we becoming too dependent on electricity and computers? What if we all lose our jobs because machines have become so powerful that they could do everything much faster and more efficiently than we humans could ever do? What if a certain artificial intelligence system becomes self-aware? Ok, that’s enough fear-mongering. Time to discuss this album’s eye candy! Quantified Self’s front cover shows a naked woman (ah, sex always sells) with a mechanic spinal cord slightly sticking out of her skin. Is she some kind of female Terminator? Do I have to come with her if I want to live? Will she be back? Anyway, hasta la vista to this part to the review!

The album’s fourth track, Ultimate Intelligence, is a big favorite of mine. Starting with a smooth guitar solo before exploding onto your ear drums as 3rd Machine tag teams with Mark Jansen to jam it all out for one epic track! And for the weakest tracks, I’m not really sure whether I should pick one. As the songs are concerned, their overall quality remains consistent throughout Quantified Self. So as I mentioned earlier, I believe that one aspect the band can still improve on is that their next songs don’t have to be as overly long as they are in Quantified Self. At least, that’s my opinion and I admit that I don’t listen to a lot of progressive metal so my thoughts may change on that over time. Damn, it’s about time I start buying some Dream Theater, Opeth and Queensrÿche records.

7,5 Terminators out of 10. A very suitable album for those looking for groovy progressive metal material with a touch of dark sci-fi! I’m curious to see them perform live in the near future, maybe they’ll teleport in straight from the year 2029! Enough talk, time for me to join the human resistance! And for you to enjoy the album’s fourth track, Ultimate Intelligence! I’ll be back!