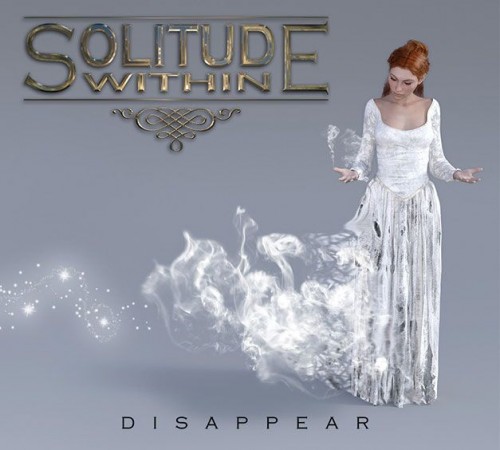 I received this album from Hardlife Promotion. In addition, I also featured the album’s opening track Fade Away on Shredder Sunday IV. So it’s about time I give this one a complete shred!

Disappear is the debut album of the Ninove based symphonic metal band Solitude Within and is distributed by BoxFish Records. It consists of 11 tracks for 45 minutes of playtime. On paper Solitude Within plays symphonic metal but not of the overly bombastic kind as you hear in bands like Epica or Nightwish. Most of the songs on Disappear follow a similar structure. Starting with an operatic session that includes such instruments like violin, piano, organ or orchestral chants and eventually transitioning to heavy industrial metal riffs by Johan and Jean-Paul. Then the song calms down to let Emmelie’s gentle vocals sink in until the tension builds up once again for the chorus. Only rarely in the album will you experience the typical symphonic sonic boom! As a result, Solitude Within’s songs feel very harmonious, intimate and down-to-earth. The various weapons in the band’s arsenal help in making the songs on Disappear fluently switch between melancholic ballads, powerful symphony and industrial metal. Another highlight on the album are Emmelie’s vocals. She has a very emotional voice that sounds both fragile and determined and very effectively brings the album’s themes to life. Let’s talk about those themes, shall we?

Disappear’s themes are often dark, discussing topics such as recovering from a broken relationship and physical and mental abuse. However, some songs like Eternal Flame and Fly are much more uplifting as they talk about protection and freedom respectively. On the album’s sterile silver front cover you can see frontwoman Emmelie wearing a shiny white dress and who’s slowly turning into white dust and sparkles. A nice cover that feels like the usually symphonic metal cover art but still maitains a basic, sober look. And to be fair, the entire scene reminds me of the recent Disney classic Frozen. Oh damn, now I’ve got that movie’s iconic song Let It Go playing in my head all over again!

The opening track “Fade Away” is a perfect introduction to the album and to Solitude Within in general so I had to include it in my Shredder Sunday show. It features all the great elements of Solitude Within introduced one by one. An intro featuring violins, heavy guitar riffs and electronic beats that quickly make way for Emmelie’s soft vocals and piano. And after that intermission everything flows together to create a thunderous and catchy chorus. Another favorite of mine is “In The Dark,” the album’s final track. I love it how the song begins with acoustic guitar and Emmelie speaking in her usually gentle voice. However, you can feel the underlying rage in her vocals and eventually she snaps and snarls her way into the song’s explosive chorus only to cool back down into another set of verses and repeat the entire thing again.

As for my personal weakest track, that “honor” goes to the title track as it lacks the overall harmony that I mentioned earlier. The song feels rather chaotic, as if all instruments, vocals included, try to outdo each other at the same time. In my opinion, Solitude Within works best when they put the symphonic, industrial and ballad sections into separate sections. Anyway, not every song can be as great as the other one and they’re five excellent tracks waiting to be heard before you reach this filler.

8 Frozen castles out of 10. With their unusually streamlined symphonic metal style Solitude Within’s debut release was a pleasant surprise for me. Disappear is a fine piece of work that proofs that symphonic metal doesn’t necessary need much grandeur or a large orchestra to make it effective. Now enjoy the album’s opening track, Fade Away.