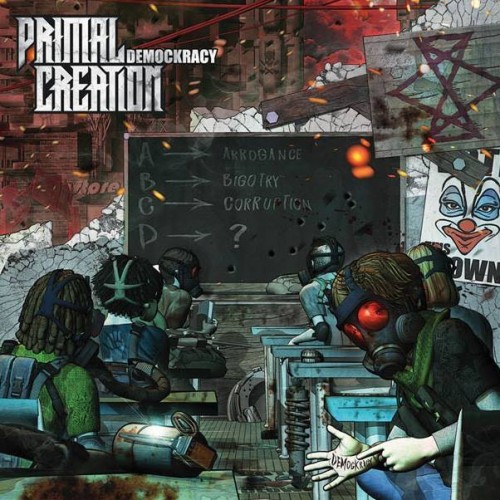 I received a physical copy of Primal Creation’s Demockracy from Hard Life Promotion. I didn’t know the band before I got hold of this CD, so thanks for the introduction, guys! That’s enough for the pick-up, you know what’s coming next!

Demockracy is the first album from Primal Creation, formed in Oosteeklo in 2014 and is an independent release. With nine songs and a good 40-minute runtime, the album is an adrenaline rush of 90s inspired thrash metal reminiscent of bands like Machine Head and Fear Factory with harsh vocals, fast guitar shreds and hectic drum beats. However, the band also shows a progressive side with songs like …Of Diminishing Returns and Good Riddance having several progressive metal sections put in between the thrash metal parts. It makes the songs pretty unpredictable as Primal Creation may start off very aggressively only for them to suddenly go for 30 seconds of melodic metal and then slingshot straight back to a mosh pit tune! Overall, the album has a contemporary and raw feel that would actually fit very well for a destruction derby game. Something like Burnout or Carmageddon. Oh, I can already hear the sound of my car crashing headlong into an opponent or running over random pedestrians. Yeah, splatter bonus!

Primal Creation’s Demockracy is a huge protest against today’s political and social atmosphere. The election of Donald Trump (likely the person the band refers to as the Clown in the album), the increasing nuclear threat from North-Korea, the radicalization in our Western world and the rise of terrorist organizations like ISIS. Nothing original but it fits with Primal Creation’s contemporary sound and vocals.


[THE VISION OF DEVASTATION]

In the middle of a polluted, overly industrialized city you can see a outdoor classroom with several gasmask wearing kids learning the alphabet with A for Arrogance, B for Bigotry, C for Corruption and so on. However, one kid looks straight in the camera and shows the album’s title, written in his hand. Spread around the scene you can see posters to vote for Clown and a huge tank with the band’s logo on it. I really love the artwork, it may depict a world torn apart by war, anarchy and pollution but the colorful, cartoony art style makes the overall setting look pretty tongue-in-cheek.

My favorites on Demockracy are the final two tracks. Memories… and followed by …Of Diminishing Returns. Memories is a short but epic instrumental tune that reminds of the opening riff of Judas Priest’s hidden classic Rock Hard, Ride Free. And …Of Diminishing Returns brilliantly showcases Primal Creation’s talent for blending hard-hitting thrash with refined progressive metal. And the guest vocals by Gerd Hanssens (from The Difference) provide a stark contrast to Koen’s angry yells. A perfect way to wrap up the album!

Although Demockracy’s opening title track sounds catchy I do believe the album could’ve had a better starting point. The title song lacks the more flexible qualities of other songs like Emperor or Good Riddance. In fact, the latter would’ve been the best opening tune for me in my opinion. A perfect balance between Primal Creation’s thrash and progressive influences. All right, the election is over! Time to see how Clown did in the ratings…

7 votes for Clown out of 10! Not bad at all, thank you for voting everyone! Primal Creation’s debut release is a fine piece of progressive thrash that you should certainly give a try! After all, we’re living in a Demockracy!

Enjoy the fifth track of Demockracy: Retain The Fight!