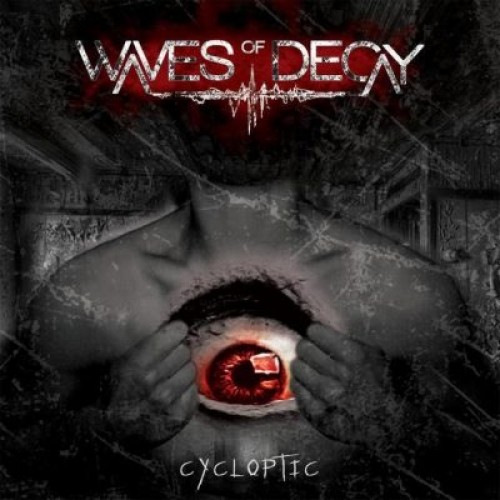 I’ve known Waves of Decay’s guitarist Arun Rao for a couple of years ever since I shredded his other band called Hope Erodes in late 2015. Recently he introduced me to the debut EP of Waves Of Decay, Cycloptic. He offered to send the physical release to me by mail which I accepted. Well, it’s time to shred once more!

Cycloptic is the first EP of Waves Of Decay, formally known as Horny Moses and is an independent release. The band uses an experimental combination of power, thrash, death and industrial metal. Stijn’s vocals can jump from high-pitched clean singing to angry grunting while the guitars vary between thrashing riffs and power metal melodies. It makes Waves of Decay’s sound feel both gritty and uplifting. Keyboards are also present but in a limited form, usually functioning as a bridge between a instrumental breakdown and a song’s opening verse. In addition, Daan Swinnen, frontman of the young thrash-death metal hybrid Bloodrocuted, joins in during Cyclopic’s final two songs to add in a few lines of his own using bone-chilling shrieks that came as a pleasant surprise to me. You know, it’s that kind of unpredictability that makes the songs on Waves Of Decay’s debut EP so interesting, especially when listening to it for the first time. And it’s tempting to give this EP another spin afterwards.

As with the band’s overall music style, Cycloptic’s lyrics deal with real-world issues like war and a possible apocalypse using fantasy metaphors. For instance, in the first track, Destiny, a nuclear attack is described as “Sulfur breathing angels. A demonic flavor. Ruinates our nation.”

A faceless guy rips open his chest to reveal a huge, blood red eye staring straight at you. The entire image is in black, grey and white with red being the only other color on the artwork. The overall art style makes me think about the Sin City comics written by Frank Miller. Very cool stuff, check it out.

Both the EP’s opening and ending tracks, Destiny and The Hurricane respectively, deserve mentioning here. Destiny does exactly what all great opening tracks do, showcasing the band’s strengths and warming you up for the rest of the EP. And with this great opening track, Waves of Decay unleash heavy guitar riffs, flexible vocals and a badass breakdown in the middle of the track accompanied by a sweet electronic tune. And The Hurricane brings the EP to an epic finale! The song’s verses are performed in death metal mode, with pounding beats and harsh vocals, while a thunderous power metal melody and clean singing takes over when the chorus kicks in. And I dare you not to sing along with Stijn as he sings his way through said chorus. It’s that catchy! And finally there’s a cool guitar solo to put the icing on the power death cake!

The fourth track, As I Walk, was a fun track but didn’t have the same raw finesse or epic feel as the other tracks. The song starts off great with a mosh-inducing thrash metal riff, but the rest of the song feels a bit like a drag compared to the rest of the EP.

7,5 Cyclops eyes out of 10. Although Waves Of Decay are a starting band on paper, the band members clearly show they are experienced musicians, working together to create a juicy, flexible sound that brings in several metal subgenres together. Well worth checking out if you enjoy power, death, thrash, industrial or anything in between!