The cake is a lie! 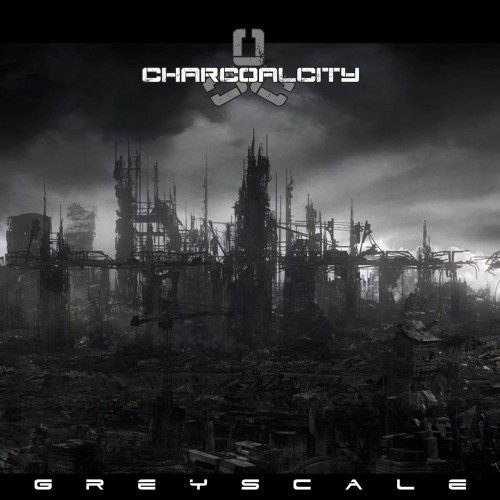 "Only when the last tree has died, the last river been poisoned and the last fish been caught will we realize we cannot eat money..."

I received a physical copy of Charcoalcity's Greyscale from Hardlife Promotion alongside Beyond The Labyrinth's The Art of Resilience. So thank you guys for the great material, let's start the shredding!

Greyscale is the first album from Charcoalcity distributed by the band's self-owned label called Deezee Records. Charcoalcity's overall style is combining heavy guitar riffs with keyboard tunes, a bit similar to bands like Rammstein, Ministry and Static-X. However, unlike these aforementioned bands Charcoalcity goes for a slower and less bombastic  feel, allowing you to fully dive into the album's dark and depressing atmosphere. The same goes for Deezee's vocals, he sings in a calm voice but you can clearly hear he's barely able to contain the rage and frustration inside of him. And occasionally he lashes out those emotions towards you and he pushes you to see the harsh truth. Time to tell you about that truth...

You may wonder why I've begun this review what that Indian proverb. Well, that quote tells you everything you need to know about Greyscale's themes. Deezee discusses many of the world's contemporary issues. Pollution, religious extremism, depletion of natural resources and materialism. In songs like Leave and Democracy he condemns terrorism and politics respectively. He shows you the flaws in believing in an immortal deity or thinking luxury creates happiness. For Deezee, it's all a lie! Democracy is a lie, religion is a lie, even the cake is a lie!

Another disturbing track is Greyscale's title track. An instrumental tune wherein former US presidents George W. Bush and Barack Obama talk about the war on Iraq and how they plan on ending it. While Obama entrusts you that Iraq will eventually return to an independent state Bush claims to end the war by any means necessary even if that means using chemical or nuclear weapons! Scary stuff indeed!

Very stylish black-and-white artwork. On the front cover you can see the ruins of a nuked city, a terrifying view of how our world will look like after a nuclear holocaust. In the middle pages of the booklet there's another disturbing image, this time a huge farmhouse which hundreds of pigs locked inside cages barely big enough for them to stand in. All getting force-fed to be slaughtered afterwards. A dark visual representation of how we, like those pigs, are seemingly caged, fed and eventually "consumed" by the global economy. But it also represents how much resources (in this case, meat production) are used to fulfill our seemingly endless hunger. True, and therefore even more disturbing!

I dig Greyscale's sixth track, Leave, a lot! The song's tunes are similar in structure to Rammstein's smash hit anthem Du Hast. Leave also starts with a electronic beat before piercing guitars and bashing drums suddenly take over. As the vocals kick in, the beats are reduced to a minimum but they eventually rejoin the fray for the rest of the song. I love Rammstein and I love Du Hast. Listening to Leave gives me a similar feeling, and that's what makes it awesome!

Another track I love listening to multiple times is Feed Me and Deezee's vocals in particular shine through the song! You can truly feel the desperation in his voice as he begs you to give him what he needs to survive. Plus the track is one of the few songs with a guitar solo, so that's bonus points!

I felt the opening track, Darkness Rules, wasn't as punchy as the later tunes on the album. Although the song's piano opening was great, the rest of the track didn't impress me much. It felt like Deezee had to warm up his vocal cords and getting his instruments in tune. Good thing the succeeding track is Feed Me and that's a badass song!

8 radioactive cakes out of 10. It took me some time to fully appreciate Charcoalcity's Greyscale but I can now safely say that this is a well put together debut release. I look forward to hearing more material from the band in the near future. Warmly recommended!

Enjoy the music video of Leave.