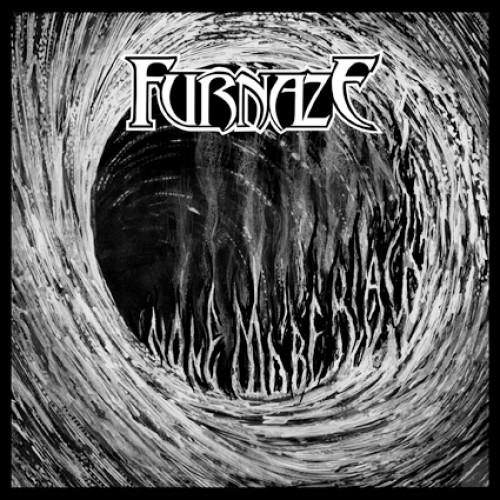 My friend and business partner Isabelle from Metal Fun recommended me to take a look at Furnaze. Although the band is based in the UK, the band's frontman, Krimson, is Belgian! So you could say Furnaze is a Belgian-British band! And I can already tell you that Krimson and his gang are more than willing to swim over the canal to give his country of birth a taste of his band's technical prowess. Let's check it out!

None More Black is Furnaze's first full-length release and features 12 tracks of thrashy juiciness inspired by the likes of Exodus, Slayer and the early Metallica. After a short, intensity building instrumental the band enters the ring all guns blazing with Breathe in The Fire. A relentless barrage of 80s thrash metal with a fast-pounding drumbeat, a scorching bass line and Krimson shrieking his way through the song and topping everything off with a technically impressive guitar solo. That's pretty much Furnaze's style in a nutshell. However, in some tracks like Ghost Rider and 2012 Furnaze go for a slower, more classic heavy metal approach although there still is some thrash involved. For my money, Furnaze biggest strength is the band's overall technical proficiency. They aren't your run-of-the-mill thrashers who only focus on speed and sounding angry. There's method in Furnaze's madness and Krimson's guitar solos in particular deserve much praise! Too bad there isn't a great instrumental on the album. There are two short instrumentals on the album, and I'll discuss one of them in more detail later in this review. But for now, I'll let you move on to...

As far as themes are concerned, Furnaze’s None More Black offers little new in that department. Its lyrics deal with typically trash metal subjects such as media manipulation, anger and violence. However in the penultimate track, Unbound and Underground, things get more bright and optimistic as Furnaze throw in a party to celebrate the beauty of rock and metal! And oh yeah, there's quite a bit of profanity in the album, especially in tracks like Fresse and Unbound and Underground. But you probably don't give a fucking shit about strong language, right?!

Ironically, for an album called None More Black, there still is a whole lotta black in the artwork, with the front cover depicting a void of pure darkness and the flames forming the album's title . Breathe In The Fire indeed! I've got to admit, the cover is mysterious and actually kind of seducing. The more I look at it, the more I get the feeling I'm being dragged towards that black, endless void, straight into the realm of Furnaze!

I've got a couple of favorites here. For one, Breathe in the Fire. I already mentioned this track earlier in my review but I can't emphasize enough how important a great opening tune is! And Breathe in the Fire is exactly that, its thunderous riffs and intense vocals provide you with everything you need to know about Furnaze and what you can expect from the album! And after a great opener, it's hard not to continue listening to the album. None More Black's title track is another badass track worth mentioning! It's a more melodic track than Breathe in the Fire but I particularly love Krimson's vocals on this track. He gives it so much that he even roars throughout the track's final guitar solos as if he can no longer hold back his raw energy! A thrashing piece of beauty! If only someone could take that song and, Showcase it!

In my opinion, the final instrumental part, CYA is way too short and repetitive. It's just a 1 minute track with a melody that repeats itself about three times. That's too bad, since throughout the entire album Furnaze has brought along some awesome tunes and a beautiful, lengthy non-vocal track would've been a perfect goodbye kiss from the band. Anyway, time to get my scorecard up!

7,5 fiery, bottomless pits out of 10. Furnaze’s None More Black is a very enjoyable album which you can easily get your teeth into. Furnaze show genuine passion and talent for their craft and for a headbanger like me, that’s all that matters! Let's hope they get to play in Belgium soon, I can't wait to see them! And hopefully you, dear reader, will be joining the party with me!