In the desert you can remember your name 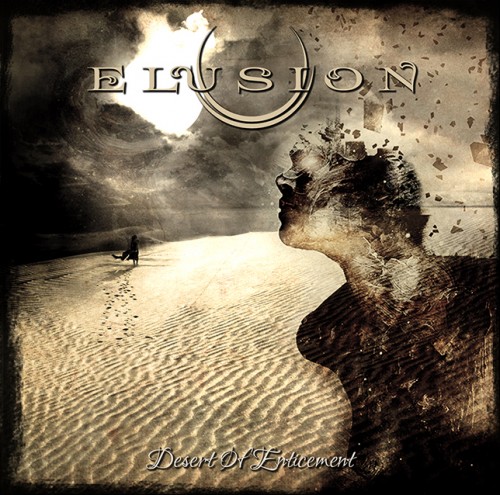 Recently the fine folks from Hardlife Promotion sent me the debut EP of the Belgian female fronted symphonic metal band Elusion. Since I'll be seeing the band next Saturday in the Asgard bar in Sint-Amandsberg, it's as good a time as ever to shred this one!

Desert of Enticement is the first release of Elusion, formed by former Ancient Rites guitarist Domingo Smets. The EP offers you 3 tracks for about 15 minutes of sweet symphonic metal. I'd describe Elusion's sound as similar to the likes of Nightwish and Epica although the band does mix things up in the way each song on Desert of Enticement is presented.

The first track, The Serpentine Trail, is the most operatic of the three, using the traditional symphonic cocktail of harsh guitar and drum riffs put together with classical music instruments such as organ, percussion and piano. Then we get the title track wherein the music takes a Middle Eastern approach and Evy's angel-like vocals get accompanied by backing grunts from Kristof. And finally there's Facade, a song inspired by Celtic folk music with fiddles, flutes, piano and even a choir to go along with the typically metal stuff.

Overall, I'm most impressed by the EP's sound quality and how well constructed the songs are. Every element of Desert of Enticement sounds crisp and beefy and the songs themselves easily got stuck in my head. Only the EP's short length reminds me that this is in fact a demo release.

Desert of Enticement's story deals with a woman who's tired of being the person everyone wants her to be and wants to be free. Therefore she travels to a desert where she experiences true physical and psychological freedom for the first time in her life. At least, that's how I interpret the songs, it's symphonic metal after all, and metaphors are of course a main ingredient of the subgenre.

Despite being an EP, Elusion do offer some beautiful artwork for Desert of Enticement. There are various beautiful images of a desert during sunrise. In some of these pictures the woman I mentioned in the previous chapter can be seen. On the CD she's wearing a wedding dress' headpiece. On the booklet the headpiece is gone and parts of her face are covered by the desert's sands. Finally, on the front cover her naked body has turned black and she begins to merge with the desert.

In that same desert the band poses in stylish black suits and a dress. Classy, although getting the sand out of their shoes would have probably been a huge pain in the ass. Anyway...

I had the most fun listening to the final track, Facade. This track's main Celtic folk melody gets me in the mood to drink and dance with all my friends! A true party song! And the band's having a party as well as they flawlessly put various instruments into the mix to play the song's main riffs in their respective ways. And Evy shows off her complete vocal range and even goes full soprano near the end! Badass!

You know what's bad about great EPs? They're over before you know it! Seriously, all three tracks of Desert of Enticement are great material so none of them deserve to be mentioned here. In my opinion, the EP's only true weakness is simply its runtime. After those 15 short minutes I'm left begging for more!

8 desert queens out of 10. With Desert of Enticement, Elusion have left an excellent first impression on me in just 15 minutes' time. The band's style of symphonic metal isn't anything revolutionary but they clearly play to their strengths as this EP will show you. Elusion are a nice little gem in the opera metal subgenre and I'm curious to see what more they'll be bringing to the table in the near future.

Here's the music video for the Serpentine Trail.