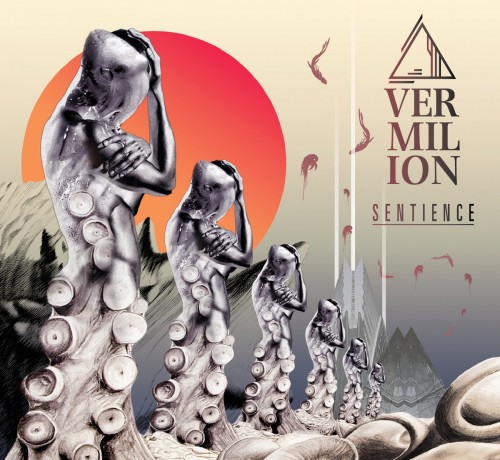 Recently Vermilion's founding member Timmy approached me during a gig he and I were attending and he asked me to review his band's latest release, which is their 2015 album Sentience. Well, Timmy, I hope you won't be disappointed by this review and hopefully you, dear reader, won't be disappointed either. Sentience is an unusual album, so that requires an unusual review. Here we go!

[THE SHREDDING BASICS & THE PARK OF THEMES]

Yup! I'm breaking my own rule of separating the music from its themes but in the case of Sentience, Vermilion's first full length release, it's certainly worth discussing the album's musical style and overarching story at once. Sentience's sound can be best described as a mix between heavy metal riffs, ambient electronic music and jazz. More often than not, these styles smoothly come-and-go throughout Sentience's tracks without one style interrupting or dominating over the other. It makes the songs very exotic and compelling despite most of them going on for five minutes or longer. There are no vocals in the album, but the booklet you get along does provide a intriguing, detailed story to which the songs adapt themselves to. And in this case, I'm going to discuss each song's style and storyline individually.

The album's first track, Alien Sun Pt. I, sets up the stage with a peaceful acoustic guitar that slowly but certainly transitions into heavy guitar riffs and equally heavy drums as the sun begins to rise over an alien planet and our main protagonist, a humanoid being named the Acolyte awakes from his lifelong slumber. As he explores the world around him, the music adapts to a more relaxing, jazzy style with synthesizer tunes replacing the harsh guitars.

In the next song, Uncanny Valley, the Acolyte discovers that creatures looking identical to himself are being imprisoned in pods and drained of their life force. In this track, the music goes for a mix of keyboards and guitars for a sound similar to Deep Purple. The following tune, Phantom Frequency, retains much of the heaviness from Alien Sun Pt. I as our main hero is being chased by a hostile parasitic creature. He eventually finds shelter inside a pyramid-shaped structure that houses Helios One, the supercomputer that the parasite oppressors use to hold the Acolyte's people hostage. The encounter between the Acolyte and Helios One is represented by the short, mysterious piano track named Helios Prelude.

After that little piano intermission, the Acolyte, determined to liberate his people from their captivity, hacks into the Helios One supercomputer and uses it to slaughter the parasitic dictators and so gaining power over the entire planet. To represent the chaos happing outside the pyramid, the track Syntax provides the fastest and most aggressive guitar sections of the entire album along with a threatening ambient keyboard tune put in between. After that, the album's atmosphere relaxes in the jazz-inspired track the Descent as the Acolyte further explores Helios One's possibilities and succeeds in freeing his species from their pods.

In the penultimate track, Revolt, the Acolyte meets his fellow species and commands them to take full control over the planet's resources. The track is a mixture of electronic beeps and a slow, threatening guitar riff as in this part of the story, the Acolyte fully merges with Helios One and so establishes himself as the planet's new supreme ruler. Similar to the parasites he destroyed earlier, the Acolyte and his minions begin a reign of terror over the land.

And so, the alien sun rises to the silver skies once more and the thunderous guitar riffs from Alien Sun Pt. I return for the final track, Alien Sun Pt. II. And like the Acolyte before him another humanoid creature awakens from his lifelong slumber, determined to free his own kind from these new oppressors. Thus bringing Sentience's story full circle.

Sentience's cover art shows an alien landscape with a line of silver statues that have tentacle bodies, human arms and squids for heads. Obviously one of the them (probably the one in the front) is the Acolyte, the protagonist of Sentience. On the inside cover we see the oppressive parasites crawling around the lyrics. The late H.R. Giger (best known for creating the Xenomorphs from the Alien franchise) would've loved these images of machinery mixed with organic life forms.

The win goes to Syntax, easily the heaviest song of the album. A gentle, ambient tune offers a little break in between the action-packed guitar riffs. Syntax would also perfectly fit as a tune when you blast away enemies in an arcade shooter game like DOOM or Painkiller because of how badass it sounds. A classic!

A very honorable mention goes to both Alien Sun tracks, as they both also groovy guitar melodies with smooth jazzy keyboard sessions. Functioning as a great opening and ending track for Sentience.

Although Vermilion's music is of consistently high quality, their style isn't that easy to get into, at least for me personally. I'm more used to straightforward rock and metal and Vermilion's sound is much more complex and flexible. I had to listen to the album quite a few times before I managed to fully appreciate Vermilion's music. But eventually, the Alien Sun inside my head began to rise and shine and therefore, Sentience gets a well-deserved...

8,5 Alien Suns out of 10. As I said before, Vermilion's Sentience wasn't an easy album to review, but I'm damn glad I did it! The beauty and deepness of Sentience grows on you the more you listen to it. I look forward to hearing more material from Timmy and his band in the near future. But first, I'll get him on the shredding table!