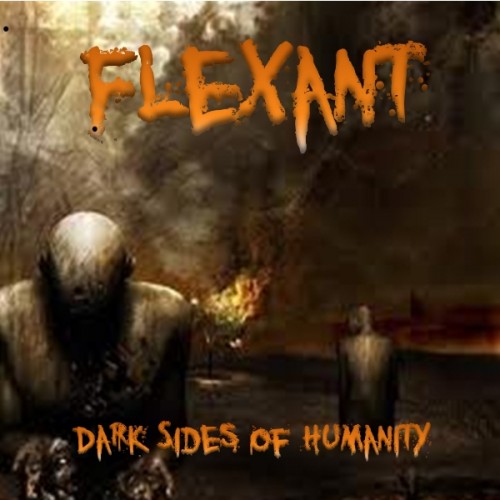 FleXanT is a band my friends at Metal Fun recommended to me. Metal Fun's leading lady Isabelle even went so far as to personally introduce me to the band during the Metal Fun Record Fair last October. And now it's time to show my sincere appreciation!

Dark Sides of Humanity is the 2012 debut album from the Ghent based melodic death metal band FleXanT. It's an independent release consisting of 8 tracks for about 30 minutes of playtime. The album starts off with the short ambient title track and then kicks into full gear for a ride that features the typical death metal traits. Rough, yet understandable growls, blast beat drums and distorted guitars. Things do get more complex and interesting as the album progresses. From the sixth track onwards, Robin's grunts are joined by vastly different backing vocals. Specifically black metal shrieks in Until the End Comes and What About the Right Things. Hell, they even have clean backings in the track Demons of the Soul. The guitar riffs also sound catchier and beefier in those final tracks compared to their predecessors.

However, one of the very best parts of Dark Sides of Humanity are the guitar solos that Philippe manages to grind out of his axe. If you wonder where he got his nickname "Quickfingers" than here's all the proof you need. Every solo is fast and technical and they help giving the songs an old school death metal vibe.

Most songs on Dark Sides of Humanity deal with the end of the world brought about by mankind. And the band knows the numerous ways how our planet can go to shit. Pollution, warfare, religious extremism, etc. Heavy themes for a heavy album and that's all I can say for this part of the review so...

The front cover is very blurry with lots of brown (reminds me of Quake) but I do think the poor image quality was a deliberate choice. After all, cameras probably won't work very well after the entire world has gone to shit! Anyway, the cover art shows a apocalyptic scene with two bald, naked and faceless individuals stumbling around the place all covered in dirt, ashes and other filth. A simple but effective visual representation of what could eventually happen to the world should we keep on destroying our beautiful green and blue planet.

As I already hinted in the Shredding Basics chapter of this review I enjoyed the later tracks of Dark Side of Humanity the most. Especially the album's final track, What About The Right Things, is a beautiful showcase of FleXanT's talents! It has a badass main guitar riff that would perfectly fit in an MMA event, the vocals are well balanced between lead grunts and backing shrieks and the song has one of the best guitar solos of the entire album.

It's not hard to realize that the first four songs of the album were early FleXanT material as they lack the complexity and catchiness of the later songs. For the weakest song, I'll go with the opening tune, Pain. Ok, it's an enjoyable tune and it has a punchy opening melody, but I wish they had given the entry spot to either Demons of the Soul or What About The Right Things as they accurately present FleXanT as a death metal force to be reckoned with.

7 souled-out demons out of 10. I'm very pleased to have encountered FleXanT and I can't wait to see them tear the place apart live on stage. If you enjoy death metal with more substance than your average growler than this is one band you should certainly check out!
FleXanT - What About The Right Things - Live at Wizzfest 2014