I smell what Hammerfall is cooking! 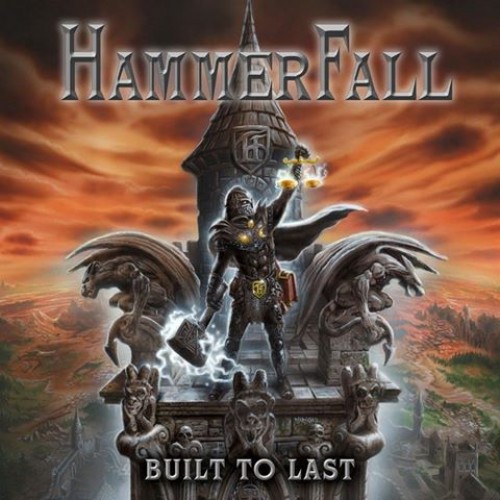 First and foremost, Happy New Year! I wish you all the best a year like 2017 can offer you. Great health, a great love life, a great paycheck, etc.

Ever since my close encounter with the Brazilian female thrash metal trio Nervosa last June I got on the promolist of Napalm Records. I can't tell you, follow Shredders, how grateful I am to get material from this prestigious record label! So it's time to show my appreciation and review this much anticipated album from the Swedish power metal giant known as Hammerfall!

Built to Last is Hammerfall's tenth studio album and the first one they released since signing with Napalm Records in March 2016. If you're reading this review you most likely know who Hammerfall are and in that case I can already tell you that Built to Last offers you 10 new tales of heavy metal power fantasy! All the ingredients you come to expect from Hammerfall are here, sharp guitar riffs, hard-pounding drums, harmonized vocals, an occasional keyboard tune and catchy anthems. Just take the album's second track, Hammer High and try your best to get that song's chorus out of your head, trust me, it's impossible!

There isn’t much else I can say to further describe the album’s musical style. It’s just the same type of material Hammerfall have been producing ever since their 1997 debut release Glory to the Brave and to be honest, I like their music a lot!

Once again, typically Hammerfall topics. The ways of heavy metal are vehemently celebrated in songs like New Breed and the band shares heroic tales of medieval bravery and dragon slaying in Built to Last's title track and the song Stormbreaker respectively. Yeah, nothing new under the sun, but the themes fit perfectly with Hammerfall's sound so why fix what's not broken?

I do wonder if Bring It, the album's opening tune, isn't secretly inspired by Dwayne "the Rock" Johnson's iconic catchphrase "just bring it!" After all, the phrase "just bring it!" is used very often in the track and since Oscar is a huge fan of pro wrestling and especially of the Rock I can't help but raise my eyebrow every time I listen to this song. Wait a minute, it doesn't matter if the song's about the Rock!

On the front cover we've got Hammerfall's knight mascot Hector standing proudly atop some random tower holding his signature war hammer in one hand and a balancing scale in the other. Sure, Hammerfall isn't known for epic looking cover art for their albums but this cover is just lackluster!

You know, I would've taken an image of an army of knights all pointing their hammers towards the sky with Hector, acting as their commander, standing atop a cliff facing his army and holding own hammer up in the air as well. Then the cover would've made reference to the song Hammer High, which is one of the highlights of the Built to Last album, speaking of highlights...

I've got several favorites here. There's Hammer High's marching drum beat and extremely catchy chorus, Dethrone and Deify's epic melodies remind me of Judas Priest's One Shot At Glory song from the Painkiller album and finally I've enjoyed Joachim's highly convincing vocals in Sacred Vow a lot. So let's put them together: Hammer High, this is a freedom cry to protect the Sacred Vow written to Dethrone and Deify!

The album's power ballad, Twilight Princess, was a tiresome song to listen through. Don't be mistaken, I can certainly enjoy a good ballad, and with a song as awesome as Glory to the Brave Hammerfall have certainly proven capable of bringing it, but Twilight Princess doesn’t play to the band’s strengths as all. The guitars feel like they were recorded in slow motion and the vocals feel just as forcibly slowed down!

Personally, I feel Hammerfall are at their best when the guitars are shrieking and the drums go fast. Furthermore, since Twilight Princess was put between such awesome songs like Sacred Vow, Dethrone and Deify and Stormbreaker this song feels like a combo breaker to me.

8 sacred vows out of 10! With Built to Last Hammerfall continues the same path as they started back 20 years ago. If you enjoyed any of Hammerfall's previous releases than this album should be a no-brainer. It contains new great anthems and fresh combative riffs as you can expect from the band. Nothing more and certainly nothing less. Hammer down!

Enjoy the official music video for Hammer High, the second track of Built to Last.