Wrath of the gods 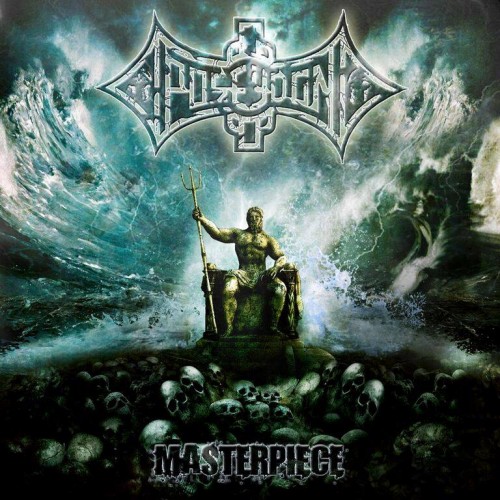 Poseydon's Masterpiece (no pun intended) was given to me by Hardlife Promotion. Once more I'm offering my sincere gratitude to them for providing me another great piece of material to shred through. Now let's make a masterpiece of a review, shall we?

Masterpiece is Poseydon's first full length album and a successor to their 2011 EP Cold World. The album features ten tracks with some songs like Classified and the album's title track focusing on death metal while other songs like Blind Faith and Innocent Blood feel more like thrash metal.

There are however two things that remain consistent throughout Masterpiece. The first one is that the shredding riffs and hellacious drums create a brutal, gritty atmosphere. The band's playing style feels raw and barbaric but the awesome guitar solos show that Poseydon has technical prowess as well. The second consistent thing in Poseydon are Christoph's vocals that I can simply describe as ferocious. He roars like a wild lion that has just been unleashed from his confinement and his singing further contributes to the album's aggressive feel.

However, I have mixed feelings when it comes to Masterpiece's audio quality. The overall sound feels a bit muffled and I'm not sure whether this was caused by technical limitations or a deliberate chose. On the one hand I feel that the audio could've been better, but I also feel that this gruff sound also adds to Poseydon's rugged charm.

There are a variety of topics in Poseydon's Masterpiece but they all share one thing, it's all dark subject matter. The title track, for instance, is about a serial killer who considers his murders to be his personal masterpieces. Other talks of the Poseydon town are war and natural disasters.

I've only received the front cover for Masterpiece so here it goes. When you get this album you get the iconic Greek god of the seas Poseidon himself sitting on his throne, trident in hand and splitting the ocean in two while he's at it! And as a sign of intimidation, Poseidon's throne is placed on top of a huge pile of skulls! Badass!

I've got a couple of favorites in Poseydon's Masterpiece. First and foremost, the title track! It has a thunderous opening guitar riff and the pounding just goes on throughout its 4 minute length. A song that really grabbed me by the throat and balls! Then there also is Masterpiece's fifth track, Blind Faith, I love how the song begins with a gentle guitar solo only to explode in your face with thrash metal riffs once the song reaches the 20 second mark. Plus Blind Faith has the most epic guitar solo out of the album, at least in my humble opinion!

And finally an honorable mention to the album's instrumental Tortured Shadows. Kind of a lost track in the Poseydon discography, but a fun tune nonetheless. It's slow and very threatening and would fit perfectly for a slasher film!

Not a bad track by any means, but Masterpiece's opening track, Classified, feels weak in comparison to the other tracks in the album. Classified does have a fun guitar solo and has two sudden tempo changes that help spice up the track, but other than that the song just feels like a warm up track for the band.

If I could've chosen the opening track for Masterpiece, I would've either gone for the title track or for Blind Faith. These two tracks better showcase Poseydon's strength which is playing with ferocious intensity combined with catchy tunes and epic guitar solos.

8 Poseidon piranhas out of ten! Why piranhas? Because they're just as fucking ferocious, that is! Anyway, Poseydon's Masterpiece is certainly a nice piece of death and thrash metal mastery. It contains everything you can expect from these two subgenres and I can warmly recommend this album to anybody looking for a good shredding!

Here's the title track, performed by Poseydon at Metal Against Child Cancer 2010.