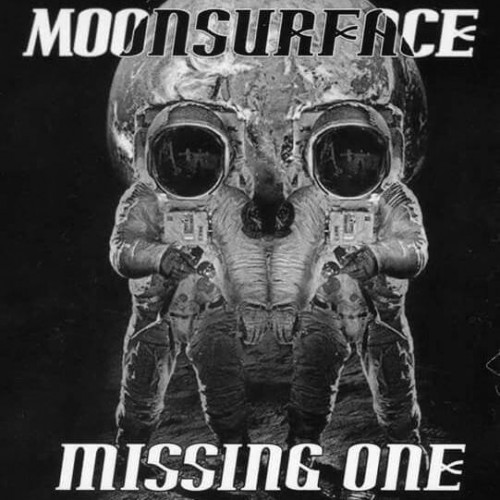 I first met the folks from Moonsurface during a battle of the bands contest in Geraardsbergen called the Black-Out Jam. Although the band didn't win, they did leave a positive impression on me and to everyone else in attendance (and it was a lot of people).

After they cleaned up for the next band to play, I introduced myself to Moonsurface and they gave me their demo EP for me to review. So here it goes!

Missing One is the second recorded release from the instrumental stoner rock band Moonsurface. The demo EP consists of four tracks. There are no vocals whatsoever, expect for some spiritual chants in the final track. Personally I don't mind the lack of singing as I believe that a tale can be told by the dynamic trio of guitar, bass and drums alone. But I'll talk about the story in the appropriate chapter.

Moonsurface's Missing One starts off with an energetic opening track called Grand Canyon. Heavy guitar riffs and pounding drums dominate this track, giving it an old-school heavy metal feel. The title track, however, is a whole different beast compared to its predecessor as Moonsurface then goes for slower, moodier tunes, reminiscent to doom metal. The third and fourth tracks of the EP, Nothing...Broken and Alien Vibes respectively, provide a balance between the speed of the first track and the brooding mood of the second track.

You know, the fun thing about songs without lyrics is that you can interpret the music your own way, so here's my vision about what Moonsurface's Missing One EP is all about.

I believe the EP tells the story about a group of astronauts (the cover art hints at that) leaving earth to find alien life. In the first track, they are enthusiastic about the journey to see places that no man has ever visited before, hence the joyful opening track.

However, things take a turn for the worst as they eventually realize that they are stuck on their spaceship, away from their friends and families. That's what the second track of Missing One hints at with its doom metal inspired style. But eventually, the space travelers stumble upon a planet with intelligent alien life and they become seduced by the alien population to remain on their planet for the rest of their lives.

Here you are, that my made-up story about the EP, time to move on.

Easily the opening track, Grand Canyon. It's such a fun, hard-hitting track and as every self-respecting opening songs does it puts you in the mood to continue listening to the rest of the EP.

Although there aren't any weak tracks on Missing One, I'll have to go with the third track, Nothing... Broken. With a runtime of almost six minutes it's the longest song on the demo EP and it felt like it dragged on. Personally, I feel that Moonsurface fares better with shorter, heavier tracks such as Grand Canyon with I already discussed in the preceding chapter.

Anyway, you can listen to the track further down the article.

7,5 alien chants out of ten. A short but enjoyable EP by these three folks from Oudenaarde, well worth checking out if you dig old-school heavy metal. I'm glad I've encountered Moonsurface and I hope to see them again in the near future. I've already got a couple of questions and remarks ready for them.

Here's a live recording of the third track of the Missing One EP. Nothing... Broken.