I'll open the gates for you. 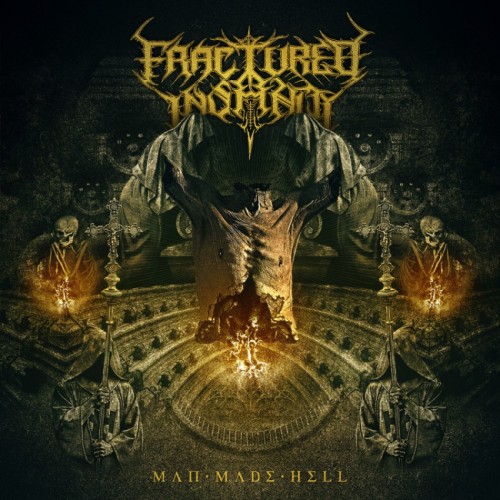 I'm honored to say that Fractured Insanity is one of already a handful of bands who contacted me personally to check if I was interested to review their latest release. So for that, thank you Dieter for sending me this.

And if you, dear reader, are part of a band and want me to review some stuff, don't hesitate to contact me. That been said, let's get this man made review going!

Man Made Hell is the third full-length release of the Belgian brutal death metal band Fractured Insanity. The album contains all the basic ingredients you can expect from death metal. Guttural vocals, low-tuned guitars and blast beat drumming. Yeah, it's not the most original death metal package you'll find, but still, it does get the job done.

The thing I look the most for in death metal are the guitar riffs and the overall atmosphere they help create. And for the most part, Fractured Insanity succeed in evoking a dark yet heroic feel in Man Made Hell. They smoothly transition between distorted guitars and more technically proficient tunes. However, I'm not a big fan of the excessive blast beat drumming in the album. I consider it a rather cheap way to make the songs feel more hectic and I'd rather have more variety in the drum work.

Vocal-wise Stefan uses all his necessary internal organs to sound as brutal as possible. His vocals nicely add to the overall roughness of the album but I wonder how he would sound if he sings cleanly. Of course, he's not obliged to do so, but I'm just curious to test his vocal flexibility.

Man Made Hell is one huge protest album against religious hypocrisy. The narrator is a self-proclaimed heretic who lashes out his rage against the pain and suffering caused by organized religion and extremism as a whole. Burning at the stake, war and other horrendous crimes in the name of religion are described in the songs. In other words, a hell made by ordinary men.

But the vocalist doesn't just stand by and watch, he decides to take action against those horrors by either killing the people that use religion to justify their crimes or by simply rejecting the belief that God is real. And I've got the say that Man Made Hell's artwork shows a gritty yet beautiful representation of the album's primary theme.

For a brutal death metal album, the cover art isn't as gory as you may first expect. That however, makes the decapitated torso on the front cover stand out even more. The torso is being torched by fire while two hooded, cross-wielding Christians surround it.

Other images include a couple of shots inside a church with torches illuminating the place, some images of skeletons and skulls and on the back cover there's a black-hooded figure surrounded on all sides by skulls.

Brown and dark yellow are the major colors in Man Made Hell's artwork and the images remind me of the legendary shooter game Quake. If only there was a shambler or a chainsaw wielding ogre hidden somewhere in those photos. Quad Damage!

It's a draw, ladies and gentlemen! In one corner we've got Man Made Hell's title track. A very flexible song that mixes harsh shreds with epic guitar solos and some of Stefan's best vocals on the album. I love the way he growls Man Made Hell as a sort of chorus throughout the song.

And the title track's opponent is its preceding song, Inferno of the Narcissist. I love the little piano opening tune and how it suddenly transforms into thunderous guitars. An awesome track!

I believe that Habitual Killer is a bit too weak for it to be the album's opener. Sure, it's opening riff is great, but the rest of the song is just bland shredding. For me, Fractured Insanity's true strength lies in the bands epic guitar solos and this one track is pretty much devoid of that. But you can check it out for yourself at the end of this review.

7 half-burned torsos out of ten! In about thirty-five minutes, Fractured Insanity show off their cunning in combining genuinely brutal death metal with sophisticated guitar melody. Man Made Hell is an enjoyable romp to go through. But in all honesty, I enjoy extreme metal bands like this one the most when they play live. So I hope to get up close with Fractured Insanity soon!

Fun fact: I actually saw them play during Rock Kappaert 2016, but since I was busy with my interview with Speed Queen I only attended the final ten minutes of Fractured Insanity's performance. But don't worry, I'll have them on the show in the near future!

Here's Habitual Killer, the opening track of Man Made Hell.