I want to be a pirate! 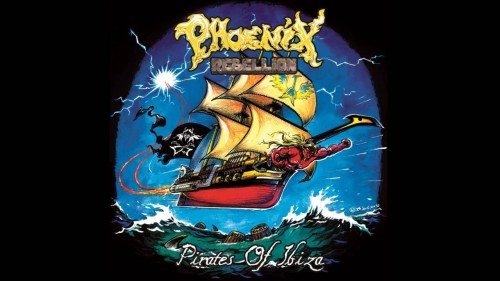 Ahoy, maties! My first time aboard the Phoenix Rebellion pirate ship was in August 2015 in Heule during the inaugural edition of Paul's Metal Fest. They were the second band on that event's lineup and got the crowd and me pumped up with their energetic music and the bottle of Captain Morgan they brought along for us!

A year has passed and now Phoenix Rebellion loaded up on grog and beer and released a demo CD. Let's raise the anchor, get Jolly Roger in the sky and sail away!

The demo is pretty long, clocking in at 28 minutes with five fully-loaded tracks of classic heavy metal. In the songs Futuranger and Phoenix Rebellion the buccaneers go full speed ahead and play fast and heavy while during the tracks Pirates of Ibiza and the Rise of The Manly Man they take things slower and bring along riffs more suitable for epic headbanging.

Nothing too fancy otherwise, the audio quality is OK by demo standards but I wished the drums and guitars sounded more clearly. But overall the songs are fun to listen to and that's what counts of course!

If you're read the previous chapter of this review, then you can safely assume this band is all about the rum drinking, sword fighting, treasure hunting life of pirates. What more can I say, landlubbers? What young, manly man hasn't fantasized of being a badass pirate? Exploring vast new lands, drinking more rum than a fish drinks water and commanding your own ship and crew? I sure did!

Aside from all the joy from being a seafarer, Phoenix Rebellion also pay their own tribute to the art of heavy metal in the track Metalheads Unite! Other than that, it's all about the joy of piracy and no, that does not include illegal downloading!

The Phoenix Rebellion ship flies over the oceans of the demo's front cover, leaving empty barrels of booze for the sharks to play with. But no topless mermaids? Such as shame!

The inside booklet shows a hand drawn picture of the Phoenix Rebellion crew posing on their Man-O-War in full pirate clothing. And on the back of the booklet we've got the band's mascot, the Manly Man. A buff, blond haired demon armed with a guitar and a bottle of rum!

The song Futuranger is the fastest track on the album and serves as an awesome opener to the Pirates of Ibiza demo. It really got me pumped to listen to the other tracks and therefore it's my personal favorite.

And thanks to its epic guitar riffs and overall combative feel, the anthem Metalheads Unite is also well worth mentioning here.

The instrumental opening track is WAY too short. It lasted for only 13 seconds! Since Niels and Christopher tear up some great tunes out of their axes in the following songs, it's a wasted opportunity that they couldn't have more audio time in this intro track. So hopefully Phoenix Rebellion will treat us to a worthy instrumental in their next release!

Manly Men out of 10! Their live performance I saw last year in Den Ast already gave me a good first impression of Phoenix Rebellion and this demo was very fun to listen to despite the audio quality lacking in some areas. Phoenix Rebellion certainly has potential and I can't wait to hear more from them soon! Aye!