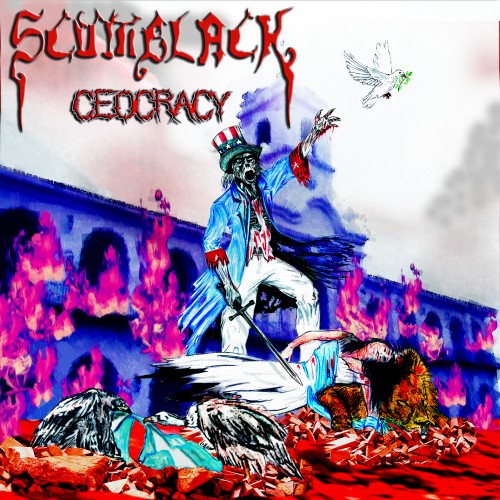 About two months ago, Scumblack's frontman Fabian personally contacted me on Facebook to introduce me to his band Scumblack. Nothing out of the ordinary, I've already received material from bands like Blackfall and Emperors of Decay from the bands themselves. But this time it's from a band that hails all the way from Argentina! I've got to say I was pleasantly surprised to notice that I even got some readers from the other side of the globe!

Anyway, this article is about the band's freshly recorded album, so let's get started!

Ceocracy is the first full length album from the Buenos Aires based thrash-death crossover band Scumblack and it gives you about 35 minutes of thrashing death fun! I'd say the band's style is reminiscent of early 90s thrash and death metal bands like Sepultura and Death.

There's a lot of different flavors in Scumblack's Ceocracy, as the band fluently transitions between reckless shreds, brooding melodies and technical guitar riffs. It gives the songs an anarchic, combative feel. I wish they had included an instrumental, as Matias and Corcho grind some really epic stuff out of their axes, the guitar solo at the end of Fly with Honor in particular is fucking awesome!

Fabian also shows great flexibility in his vocals as he mixes clean singing with rough grunting and wild shouting. He does a fine job at putting over the themes he talks about in the songs and I can already see him leading a crowd of angry citizens towards the corrupted heart of the government.

Overall, Scumblack's sound feels both sophisticated and harsh, but I have a feeling that the band can jam and grunt even harder than what they do in Ceocracy. The songs are fun to listen to but they aren't as punchy as the bands Scumblack draws inspiration from. Still, this debut album shows the band has potential so I'm curious to hear more of them and I'm even more interested to face them head on in a live gig!

The topics Scumblack discuss in Ceocracy are the common issues of our modern society. Poverty, unemployment, consumerism, social injustice and the like. There also is a song in Spanish called Sobrepoblación dealing with, you guessed it, overpopulation! But fortunately, we and the band have metal on our side to take on all that adversity.

Well, Ceocracy's topics are nothing original to the genre, but it perfectly fits the gritty, up close and personal atmosphere of the album.

We see a zombified Uncle Sam standing behind a freshly slaughtered lady and surrounded by fire, vultures, debris and blood! But in a sort of ironic peace gesture, he sends a white pacifist dove towards the sky away from the slaughter.

The image nicely represents the band's opinion on capitalism and America's influence on the world. A bloody good looking cover! And yes, pun intended!

That's all I've got from Fabian regarding artwork. So it's time for...

Ceocracy's third track, Real Heroes, is the fastest track on the album and it's an awesome tune to mosh and shout along to and for that reason it's my personal favorite.

If you've read some of my earlier reviews you'll know that I always love a badass opening track and this album's opener, Brainless, is another addition to that list. A great track that nicely showcases what Scumblack has in store for you should you continue listening to the album.

7 bloodied pacifism doves out of 10! If you're looking for a fun and effective combo of thrash and death metal then Scumblack's Ceocracy is a fine choice. It has charms from both subgenres and I'm sure this won't be the last we've heard from this band. I now hope me and the band will have a close encounter in the near future. Hasta la vista, baby!

Here's the music video for the opening track of the album: Brainless.