The Dutch are gearing up for revolution! 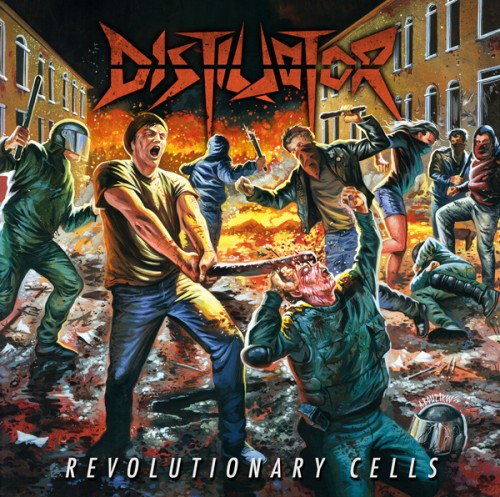 I met the guys from Distillator a few months ago during a metal-punk cross-over festival last spring in Aalst. They certainly were one the best bands of the event. At least what a guy like me, who loves 80s style thrash metal  is concerned. So of course, getting the album and having the band members autograph it was a mandatory task.

Revolutionary Cells is the first album from these Dutch thrashers since they got started a mere two years ago. Yeah, if you read the opening paragraph then you may already have a pretty good idea what to expect from them. Everything from Distillator breathes old-school thrash metal straight from 1986! Laurens’ guitar solos are both fast and aggressive but still remain highly technical making them overall very memorable. His vocal range is flexible, as he has no problem raising his vocal cords from pretty low growls to Tom Araya style yelling. His high-pitched Dutch accent give his vocals something of a bombing raid siren but this time it won’t be nuclear bombs dropping on top of your head, instead you’ll get hard-hitting, no-nonsense metal!

But of course, great vocals and guitar shreds are useless when not combined with a thunderous bass and lightning fast drums. Fortunately, Frank and Marco got you perfectly covered on those two aspects. All elements combined give Revolutionary Cells’ tracks a whole lot of pepper, making them ideal for some serious headbanging and bone breaking moshpits, ideally both at the same time!

Pretty basic for the thrash metal genre. War, either through nuclear holocaust (Shiver in Fear), religious brainwashing (Distinct or Extinct, Sacred Indoctrination) or relentless slaughter of innocent lives (Bloody Assault) is the main theme for the album. In addition, the album also deals with postwar trauma (Suicidal) and to make the throwback to the 1980s complete, the song Death Strip is about the Berlin Wall.

The album’s front cover features a big fight scene between rioting civilians and the police with the upset citizens gaining the upper hand. Pretty much the same carnage that happens during a regular Distillator gig! Expect then there are no cops around the place, good for them!

The inside artwork has the traditional lyrics with every page featuring a blood red photograph representing the subject of each song. Finally, the back cover has individual black and white pictures of the band members holding guns, all locked and loaded! I actually wished they were pointing their guns at the camera, as if to say “we dare you not to like our album!”

The album’s penultimate song, Death Strip, is my favorite. I’ve always been a sucker for superfast and aggressive songs and this one, in my opinion, is the heaviest of the bunch. It’s a perfect showcase of the band members’ skills as the guitars, bass and drums all play at 110% intensity. So yeah, if you can only listen to a single Distillator song, make it this one!

The runner-up, Shiver in Fear. Yeah, actually for the same reasons as my overall favorite track on the album. Both songs are played during pretty much every Distillator concert and I challenge you to try not to headbang or to mosh when these two songs are being played!

9 cheese croquettes out of 10! Although Distillator was formed in 2013, they’ve been rocking like it's 1986 and they aren’t in any mood to slow things down! Even if you dig thrash metal only a little bit, then Revolutionary Cells will leave you more than satisfied. I myself can’t wait to see what these Dutch maniacs will be digging out of their guns for their next iteration! But for now, enjoy this one!

Take a look at the album’s opening track: Guerilla Insurgency.