Enter the Domain of Death 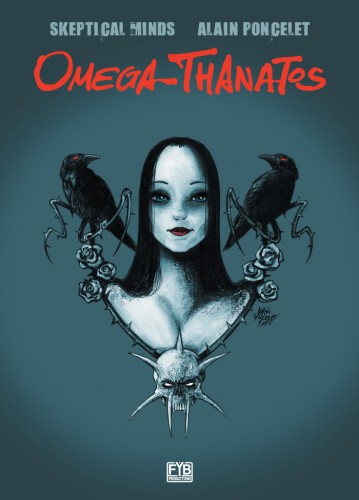 A pretty recent independent album I received from Hardlife Promotion. So thank you folks for giving me another fine piece of Benelux metal goodness. This release is quite different compared to the stuff I reviewed in the past few months, which consisted mostly of classic heavy metal, thrash metal, death metal and everything in between. But the metal scene has a lot more to offer than that and the Skeptical Minds have given me great, pitch-black proof of it. So let’s jump into the void of eternal darkness and review this one!

The Skeptical Minds’ Omega Thanatos is the band’s third full-length release since they were founded in 2002. And I’ll be honest, I haven’t heard a single note of the band before I received my promotion copy of Omega Thanatos, so I’ll review this album by its own merits. As I already teased in the review’s opening chapter, the Skeptical Minds don’t play your typical metal sound as they love to add in other instruments like harp, violin, piano and electronic sound effects. However, the band manages to strike a good balance between these aforementioned instruments and the good-old trio of guitars, vocals and drums. It gives the album great variety in terms of instruments but they do maintain a dark and brooding atmosphere throughout. The non-metal instruments are often used during the introductions and endings of the tracks while the main gist is inspired by traditional heavy metal. Karolina has a good vocal range, sometimes she shows off a high-pitched, angel-like voice but then she suddenly switches to more anger and frustration filled vocals. I particularly love her opening suicide speech in the song Last Friends. She reads it with such melancholy and despair that you cannot help but wish you were able to hug her and comfort her sadness.

Death is the main topic of discussion in Omega Thanatos. The album’s main story is about the narrator losing a close friend or relative and how she cannot cope with the loneliness resulting in recurring nightmares, alcohol and drug addictions and anti-social behavior. Eventually, the protagonist loses her grip on reality and in her mind (or in reality?) she meets Thanatos, the master of souls and the keeper of the dark gates. This encounter turns the narrator insane and it all ends with her falling into a coma. Will she wake up and take her life back, or will she die and join her beloved friend in the afterlife? We’ll never know.

To accompany the release of Omega Thanatos, the Skeptical Minds and Belgian comic book artist (and fellow metalhead) Alain Poncelet created a comic book. The comic offers a visual representation of the story told in Omega Thanatos’s songs. Alain’s gothic inspired drawing style fits perfectly with the Skeptical Minds equally gothic influenced music. I received the comic along with the album’s tracks and found the comic a short but enjoyable read. I highly recommend you reading the comic while listening to the album.

For me, the album’s third track, Fears, was the most fun to listen to. It’s one of the most metal sounding songs on the album and reminds me a lot of Rammstein’s hit single Du Hast. Both songs begin with a gentle techno-inspired opening tune before bursting all out with razor-sharp guitars. Another favorite track of mine is Horror Show. The song begins with a slow and gloomy violin track until it unleashes a threatening guitar riff, reminiscent of Megadeth’s classic tune Symphony of Destruction. Very catchy, overall.

8,5 doomed souls out of 10. The Skeptical Minds’ Omega Thanatos may or may not be your cup of tea depending on whether you do or don’t mind metal with some (literal) additional bells and whistles. I myself, however, can certainly enjoy something more abstract from time to time. In any case, the Skeptical Minds can certainly expect me in front of the stage when they visit my neighborhood.