The road ahead is rocky, but it’s worth the trip. 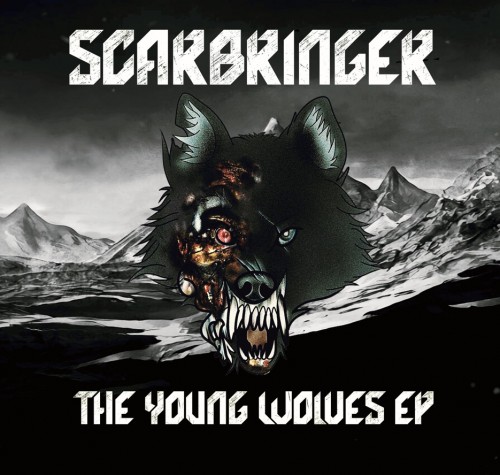 I’ve been following Scarbringer for a while now ever since I’ve got to know vocalist Thomas from the various metal events we attended together over the years. He introduced me to his Scarbringer project and asked for my thoughts regarding their debut single “Angels And Demons” (which I reviewed, read it here: https://www.belgianmetalshredder.be/reviews/291).
Now Thomas and his bandmate Miguel offered me to check out their independently released debut EP “The Young Wolves” and shred that one too. 3 new tracks, let’s see how this one shreds.

Scarbringer’s “Young Wolves” EP begins “The March Of Vercingetorix,” at first a decent sounding tracks thanks to its pounding main melody but it does end up getting repetitive as the song goes on and the overall slow tempo of this song doesn’t quite make me feel like I’m marching with this legendary Gallic king to face off against the armies of Julius Caesar.
The next song is called “Path Of The Wasted” and like its predecessor its starts off strong with powerful guitars but once again the song suffers from repetitiveness and it doesn’t feel that energetic for a song that’s basically about drinking together with your comrades in the halls of Walhalla. That being said, however, this song does have a great, lengthy guitar solo backed by keyboard samples and more engaging vocal deliveries. Two things that make this song a better tune compared to the opening track.
Scarbringer saved the best for last with the title track of the “Young Wolves,” starting with crispy bass and then the other band members join in for a smooth and high-octane anthem tune. It’s shorter, tighter and all things considered, better built than the two tracks that came before it and I believe a song like this can get the average headbanging crowd going.
One of Scarbringer’s main weaknesses in my opinion is that their material (especially the EP’s first 2 songs) is just too slow and too lengthy for a band like this. They may start off with some solid riffing but either hold on to said riffing for too long or slow down and cut out the momentum built by that initial riffing. I’m not saying they should be going for a thrash or speed metal pacing, but just increase the average bpm a bit. A good example of Scarbringer playing at overall very suitable pacing is the title track of the “Young Wolves” EP.
Now that that’s out of the way, let’s delve into Scarbringer’s strengths. First off, I like Thomas’s vocals, he has a nice and clean howling quality to his voice that fits with the dark lyrics of Scarbringer’s songs. Next up, I like the main guitar riffs, aside from the vocals there provide the most in carrying the material forward.
What I’ve also noticed is that Scarbringer’s style positively evolves as the “Young Wolves” EP continues, employing more musical traits like guitar solos, keyboard samples, backing vocals and getting the speed and energies up to more suitable levels.

The artwork of Scarbringer’s “Young Wolves” EP is pretty simple, it features the band’s wolf mascot whose face is partially clean wolf and partially demonic/cyborg. A Terminator reference maybe?
I believe 3 songs on the “Young Wolves” EP function like a trilogy of sorts. Starting off with the narrator and his comrades fighting alongside his comrades on the side of Vercingetorix during the Gallic Wars, then a few centuries later becoming Vikings, dying in battle and going to Walhalla and eventually the guys get reincarnated as 18th century pirates while promising to say together and fighting together until the end of time.

Of these 3 songs on this “Young Wolves” EP, I’ve chosen its title track as my favorite. It has a solid anthemic quality to it and the pacing is well-built throughout with genuine energy. Not to mention it’s significantly shorter than the other 2 songs, which makes the title track feel tighter as well. It doesn’t overstay it’s welcome and it gives me a good indication of where Scarbringer’s style should evolve into.
The weakest track for me was “March Of Vercingetorix.” It felt too long, too repetitive and aside from the groovy main riffs, it doesn’t feel quite like the epic battle march what the lyrics want to tell us.

6 wolfpacks out of 10. While my score for this EP is rather low, I do feel very hopeful towards Scarbringer. As the “Young Wolves” EP progressed, the band showcased more and more of their traits and the ending track in particular shows Scarbringer as a band that can easily get a crowd engaged with powerful guitars, howling vocals and a high-impact delivery. Hasta la vista, baby!