Give it to us RAW! 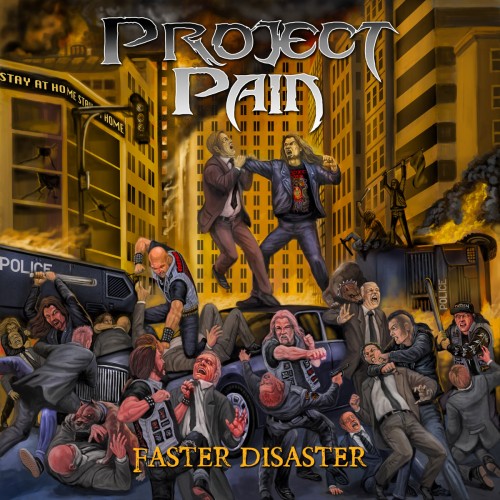 Project Pain is a pure old school thrash metalband from the Netherlands. Their story began in 2011 with Bauke Goudbeek (vocals) and Guido den Hoed (lead Guitar) established Project Pain. They released their first album in 2012 called "I have sinned" with Rob Hoefakker (bass guitar), Henry Churchill (solos) and Serge D (drums) with guest solos from Wim Epskamp and Mark Staffhorst. Next up was "Thrashed to Kill" was released in 2015 with guest appearance of Josh Christian (Toxik). Their third album called "Brothers in Blood" was released in 2018 with a guest appearance of Dennis Smeekes. The new album "Faster Disaster" is released on October 21.
First off, I love the album artwork of "Faster Disaster." The ongoing chaos of metalheads kicking ass! The details are insane! From a guy in the front wearing a demin jacket with band patches like Kreator to another brawler wearing a hoodie from SODOM and a cap with THRASH on it, and there's also a guy with a t-shirt from Project Pain. You can feel the frustration from COVID-19 by looking at this artwork.

The album kicks off with ‘Val Kapot’ (drop dead). The riffs are brutal and raw. We get a savagely Dutch thrash song that slaps from the start till the end. Usually I do not like the singing in Dutch but this song is an exception. Next up is ‘Mean Metal Machine’ and I must say I freaking love the intro! Bauke kicks off with ‘FUCK OFF BLEGH!!!’. We have Iron Maiden-like high pitch vocals and it’s insane. This song will make you sing along. A headbanger with a thundering like solo. For the record I am not a big fan of thrash but the fiercely riffs punch harder than Mike Tyson and the drums will drive you ready for war in the pit. Be sure to check out the videoclip below.
‘Army of Hell’ continues the metal machine and this song reminds me of Slayer. If you think about catching a breath here well you better think again. This album is not for the faint of heart, I can tell you that. What has the next track ‘Submerged’ to offer? The brutality continues spreading terror beneath the surface. Guido shredding riffs like a maniac, Serge drumming like Satan himself is coming to get him and Rob blasting bass like a maniac. ‘Presto vs Metal’ gives us an instrumental song. But don't think for a second that this will be a relaxing moment because we've got epic solos and frantic riffs, in other words pure chaos. So put on your headphones and get ready for the ride of your life!
Now we have the album's title track ‘Faster Disaster,' and it's really a fast disaster. Slaughtering anything that stands in the way. It reminds of Anthrax from the 90s. ‘Fields of Death’ will make your neck muscles scream of pain. No rest for the wicked with these fast-paced riffs. With ‘Feel the pain’ you can catch your breath for a second. But it will still make your heart beat faster. ‘Dead Inside’ will destroy you! This is my favorite song of the album. Think before you go in the moshpit with this one. It might be your last….
This song made my head blurry because of the intense headbanging. And last but not least we end with ‘Die In Peace’ and those who are going to die salute you! This is a pure old school thrash song with catchy riffs. Now we can die in peace… but wait, we have a bonus track! ‘F.Y.Y.F’ is a short (39 seconds) song just to push out the last bit of energy you have left in your body. 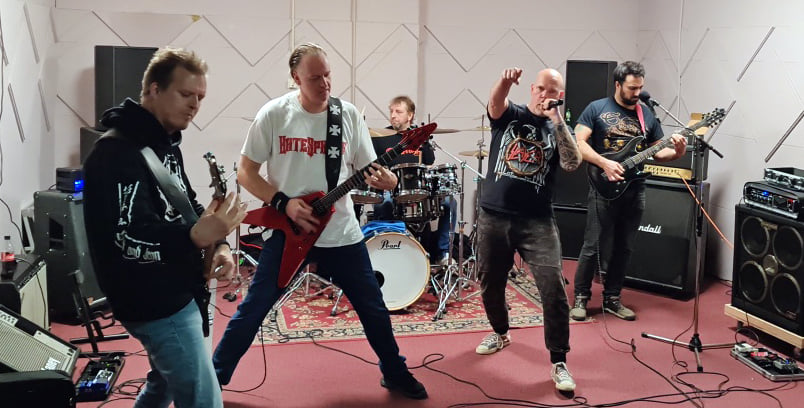 Project Pain's "Faster Disaster" album features 39 minutes of mayhem drenched in filthy riffs, spine blasting drums, heavy bass and violent vocals wrapped in thrash from the 80s. This is for all the fans who love head shredding riffs, violently moshpits, Headbanging with severe neck damage. If you like Slayer, Anthrax, Exodus then you will sure love Project Pain. It is not live changing, but it does not have to be. It is straight old school thrash and, that is the way we like it!
80/100