Let your guts out!

-- Temptations For The Weak -- 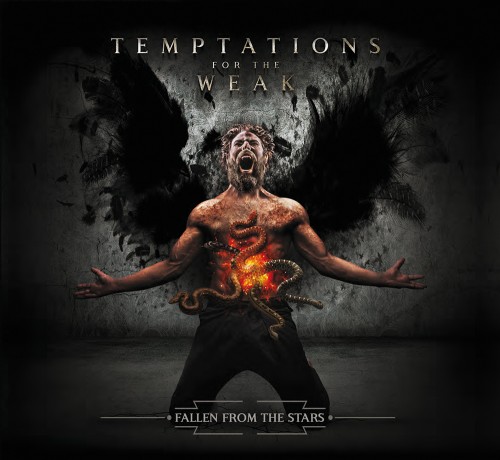 Well... we've got a small Belgian group here and they're good! It's Temptations for the Weak that comes back to us with a much stronger album than the previous one called "Black Vision" (read Stijn's review here: https://www.belgianmetalshredder.be/reviews/40). A change of style, a more assertive and rough vision that I quite really like! Let's see the tracks they offer us. 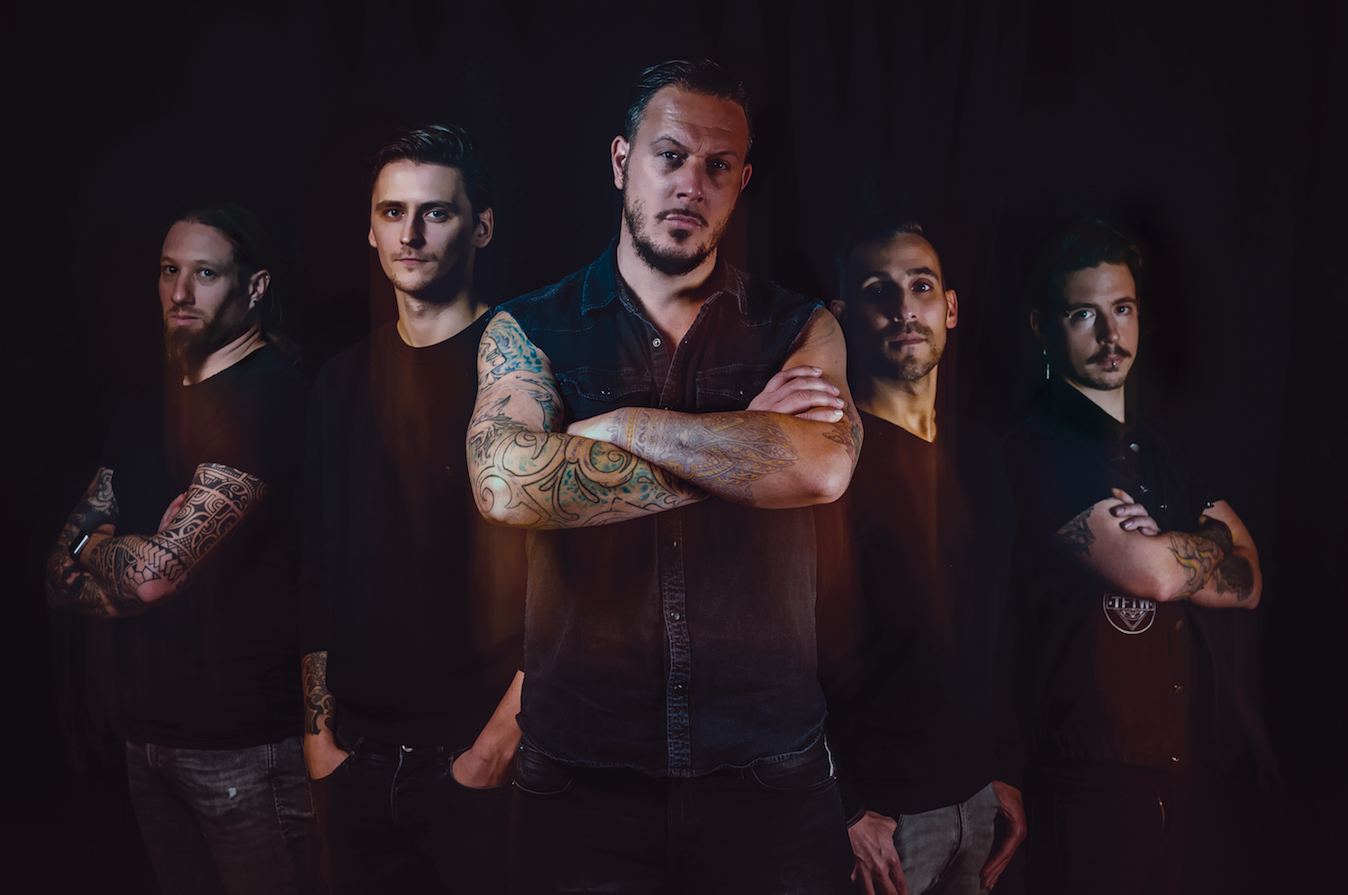 First of all, I declare the intro of "Tear it down" as awesome! In fact it's pleasant to the ear in a melodic style, but moreover, it fits perfectly for the title and the album. It is necessary to note however some lengths which could have been avoided with this track's 5:49 playtime it felt a little long and I would have cut a good minute. But, that aside, I adhere! "In Between," again, the intro with the use of bass toms is a killer, simple but effective! The small touch of clear vocals is an interesting addition and that I hope to hear again further down the album because it feels just right and has an intensity which does not denote with the remainder! I just regret that this song, compared to the preceding track, is a little short. It misses something... undoubtedly a recall of the drums at the beginning in a small break cutting the piece... and that would have given a little more change of intensity to the song, but still, a solid effort, well done guys!
A track that's a little more peculiar is the next tune, called "Falling from the Stars" because... starting with the brutality of the 80s porn star in a hardcore SM movie, the break in the middle makes this song move into a more poppy track for a moment... but of an undeniable quality... all this to finish the auditory rape with a soft and rough seed at the same time, a little pleasure that makes me want to go for a second ride! One thing that we can't reproach to the band is how they start off their songs! The follow-up track "Become you" is (still) an example to follow! But more than that, this title is hits like a nuclear bomb! This vocal duality is top notch and a big bravo to drummer Timo Opdebeeck for his great rhythmic drum work (man if one day we see each other remind me to tell you a personal anecdote on your last name!)
"Homelands" starts off on the right foot and you can already hear the phrase "fight for life" during the concerts ringing out loud and clear! A little basic track but terribly powerful and energy generating! My reproach? Come on, I would have liked a part that's "darker/slower" around the 0:43 part because at certain moments I had the impression that we had to take the train or to pee ... something that would have added gravity before starting again in full power. Again Timo's playing in time "counter time" (or like we say in French "temps et contretemps") mutates the whole thing into a hard-hitting metal tune!
"I am" not convinced of this particular song. This title is not bad, but it feels just too conventional. We fall here into what I could reproach to this musical genre, it is to fall in the facility, ok it is powerful, ok it is energetic, it has all the bare necessities... but, it holds no surprises, without this small thing which will make you come back there by saying "hold on, I would make me a small "I am" tune. Let's just say this is a very good filler track. "Mind insane" could have fallen also in the observation of the preceding "I am" track but it comes out better, especially thanks to the dual guitar part by Djoni Tregub and Jonas Heylen which raises the bar for this song quite well. It's add something like a little spice, a little twist and it turns this song from bfair to good.
We finish this album with "Pigs to the slaughter" ... Just the title on its own makes me want to listen to this tune! And as a final song to this enjoyable album I'd say it's very suitable. I just dislike one small thing in this song, something that I could dislike just as much in many of the other songs on this album but here it really hits like a sore thumb and that's the lack of a certain "Stop" ... at certain moments we wait for a variation or an abrupt stop to restart... a form of punctuation in listening. Otherwise, a good final track. 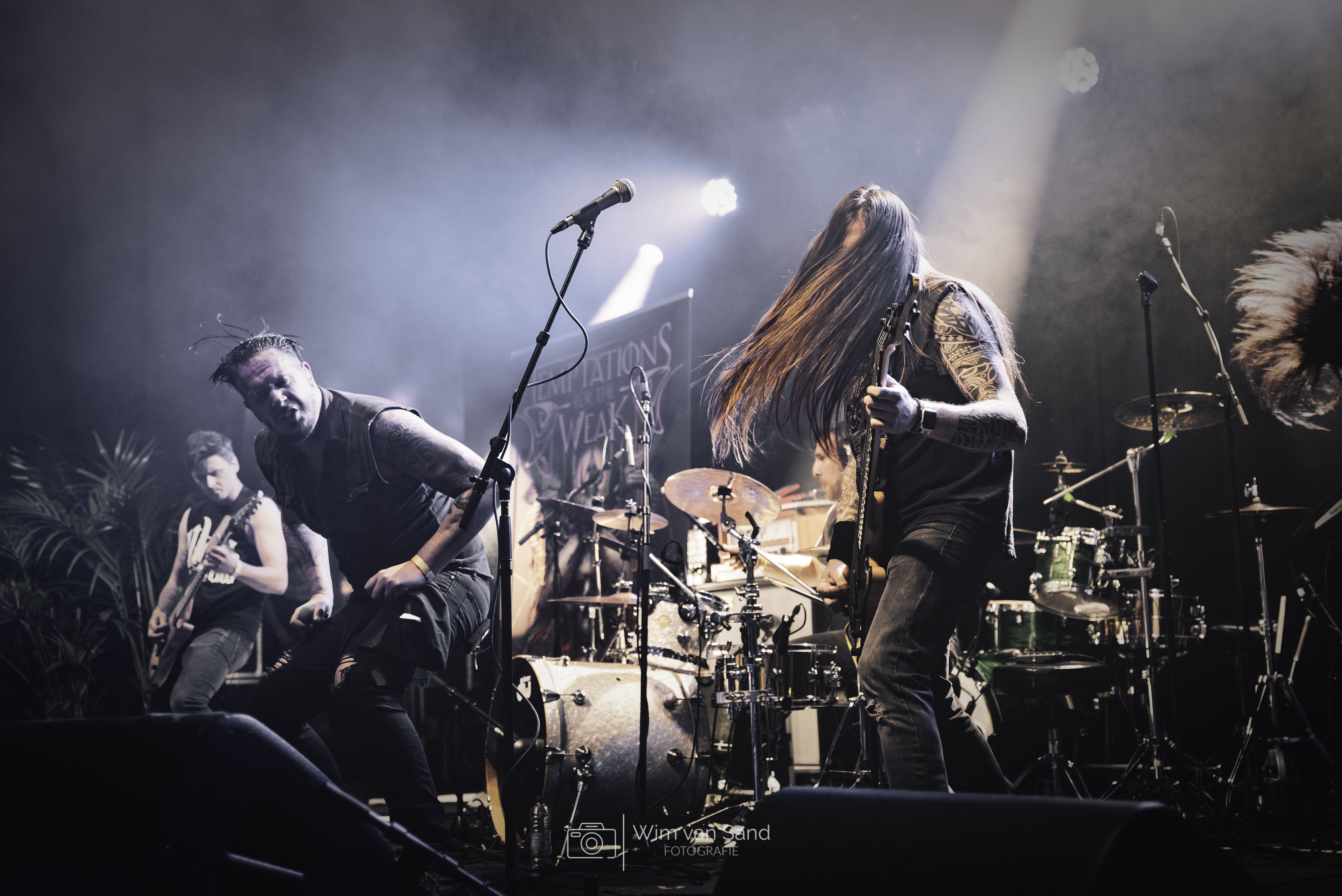 Well I didn't get bored with these fine guys from Antwerp! I particularly appreciate the drum work of Timo as you could have guessed but I would have liked that Ken Michiels (bass) was given a little more space to add more depth and roundness to certain moments (it happened but only too rarely) otherwise on the vocal level (Jadran Beauprez and Djoni Tregub) this duality is really in agreement, right and well tuned within the framework of the group. "Become you" is the quintessential track that would I would let people listen to in order to convince them to check out Temptations For The Weak! As for me their new album "Fallen from the Stars" was a very good discovery for me.
8,25/10 ... I like it a lot but some things can still be improved. Frankly convinced anyway!

My opinion on the previous album is that the song "controlled" in particular was really good, but the album as a whole was clearly too nice. Since then, however, they've muscled up their playing style and presentation and now offer things that can really make them feel unique within the metalcore scene. They've got their balls out as they say and it's a nice bunch of testosterone! I would have given that older an album a 7,7/10. Let's just say it was a different style.