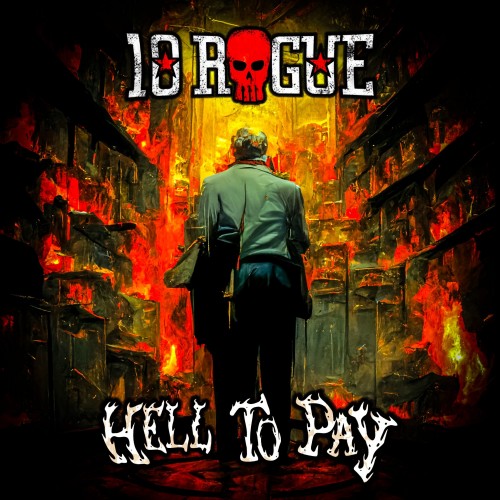 10 Rogue is a band I’ve been following for about 4 years now ever since I saw the band live as the headline act of the Metal For Angels charity event. That day I also bought the band’s debut album “Serpentine” and had a good time listening to it. Now the band has invited me to check out their new single “Hell To Pay.” So let’s shred this one and see how it compares to their older material.

“Hell To Pay” is released via the BUT! Music Group and is available on Apple Music, Spotify, Deezer & Amazon. I’d describe 10 Rogue’s sound as similar to grunge and alternative acts from the 1990s like Alice In Chains, Pearl Jam and Nirvana.
The “Hell To Pay” single itself features melodic guitars amplified by heavy bass which gives the sound a certain weightiness. That weightiness is further enhanced by Peter’s vocals. He has a high-pitched but raspy voice that has an echoing quality to it and at times he reminded me of the late Layne Staley. For me, I think Peter’s voice can be used even more creatively, during the first verse of the “Hell To Pay” song his was strangely snarly voice, giving it an otherworldly feel. For the rest of the time, his voice is cleaner and therefore more generic.
Another thing that I think can be added to make 10 Rogue’s sound feel more unique are the guitars, there’s a very short solo near the middle and a longer solo near the end and I would like to hear a little more of that. Also I think some occasional extra distortion can make the guitars feel more powerful and varied.
Stylistically, “Hell To Pay” isn’t much different compared to the songs they made in the “Serpentine” album. In terms of mixing, however, I do feel the sound has become more balanced, in “Serpentine” Peter’s voice was more pronounced, this time the rest of the instruments take a more center stage and I believe this makes this new “Hell To Pay” sound more aggressive compared to the more laid-back feel of 10 Rogue’s previous tunes.
All things considered, 10 Rogue’s freshly made single shows a positive evolution within the band but for me, I want to hear a heavier 10 Rogue that’s more hard-hitting metal than mellowed out rock. I believe the band has all the musical ingredients to pull it off, their material has genuine attitude to it and I’m confident that this attitude can be further put forward in their future material.

The artwork for 10 Rogue’s “Hell To Pay” single features the backside of sharply dressed man looking towards the nightmarish destruction in front of him. A scene of dark grey & green and hellish red & yellow fire. Maybe the guy himself is responsible for the destruction he’s witnessing and now will be paying with his life as the flames are close to engulfing him.
Thematically, the song is about retribution with the narrator being betrayed and disappointed by the disloyalty of someone he once considered a friend. He denounced his former friend as being a phony who will now be getting his comeuppance. There’s also a music video for this single and that video simply features the band performing the song. One fun effect is that the video begins with a couple of seconds of silence and the music only kicks off at the closeup shot of Peter’s feet slamming the concrete ground.

7,5 serpentines out of 10. While not much different compared to their previous stuff, 10 Rogue’s new “Hell To Pay” single is a straightforward rock song with a more balanced and slightly heavier sound and I therefore consider it a nice little upgrade to their material. Check it out if you like 1990s inspired alternative rock.