Tempting the Weak, with Strenth

-- Temptations For The Weak -- 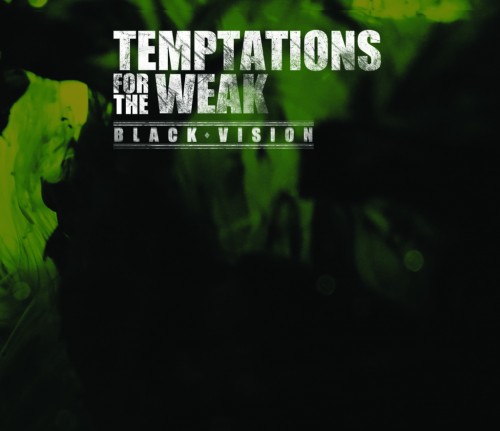 An independent release that Hard Life Promotion had sent to me a couple of months ago. Yeah, I’m lagging a bit behind on the review track. But better late than never, I guess. Anyway, a big thanks to HLP and the band for giving me a shot at this. I’ve had a good time, as always! Time to plug myself into this one!

Black Vision is the full-length debut release of the 2011 founded Temptations For The Weak (from here on shortened to TFTW) According to the band’s official biography, TFTW is what you get when you jam Machine Head, Killswitch Engage and Trivium together. Resulting in a raw, raging metalcore sound straight from the black, yellow and red blooded country. Well, I’m not going to disagree on that statement. As the drilling sound of the album’s opening track kicks in, you get introduced to a band playing their instruments at a very fast and aggressive pace. This combined with the grunting vocals is more than sufficient to make me and other maniacs start a good old mosh. However, TFTW doesn’t rely on ruthless energy alone to sell their sound. From time to time, they slow down to a more soothing tempo and Djoni transitions to more natural, slightly tragic sounding vocals. These changes in pace and feel are always very sudden, giving the songs a sense of unpredictability. And every track also features a classic heavy metal guitar solo. For me, those solos are Black Vision’s biggest highlight. It’s too bad that this album doesn’t have an instrumental track, I would’ve loved the idea of Djoni and Jonas trying to out-riff each other for five minutes straight!

The overall theme in Black Vision has something similar to the Sci-Fi classic the Matrix. The narrator (AKA Morpheus) attempts to make the person he’s talking to (AKA Neo) that whatever the latter believes to be true is nothing but a lie and that he can help him escape this “prison.” Yeah, maybe it’s just me being a huge Matrix fan (of the first movie, mind you, the sequels make me less enthusiastic), but when you hear songs about the idea of being unknowingly controlled, trading your life and things feeding off you, you might also think this all sounds a bit too familiar. Uh-oh, got to make sure I don’t turn into an Agent, isn’t it, Mr. Anderson?!

Judging from the album’s artwork, I’m more inclined to call the album Chernobyl Vision rather than Black Vision. All of the album’s artwork is presented in a green radioactive-like shade with black clouds flying all over the place like someone had too much ink to spare! Even the CD has that same nuclear look. I wonder if it glows in the dark. Must try it after I get my hands on an autographed physical copy. You know, if the colors were switched, it would’ve looked like the code from the Matrix. Shit, I’m really starting to get overboard with the Matrix references. Must rent that movie again and reenter the real world!

With Black Vision’s fourth track, Underneath the Skin, TFTW competed in the 2014 Redbull Ballroom Jam and successfully earned a spot on the bill of that year’s Graspop Metal Meeting. And, after hearing the song myself, I find that achievement to be well deserved. It’s a great, hard-hitting track, showing the band’s strengths at its best. And so it’s my favorite track on the Black Vision disc. Another favorite of mine is the preceding track, Controlled, I love the song’s main guitar riff because I find it very catchy. And you all know how much I love a memorable guitar shred!

8 green Matrix code lines out of ten! While metalcore isn’t my favorite subgenre, I did genuinely enjoy listening to Black Vision. Its songs pack a good punch and I’ll certainly enjoy slamming into whoever brave enough to get in the pit with me when TFTW are playing their set.

Not Forsaken - Temptations for the Weak