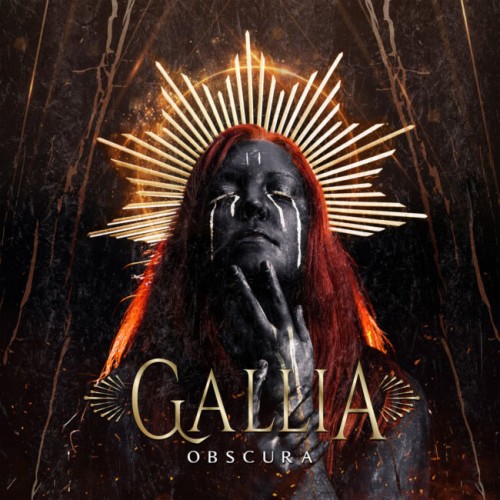 “Obscura” is the first full length from this Belgian symphonic metal band called Gallia, an act that we have been following for quite some time. Check out Stijn Metal Shredder's review of Gallia's debut EP “Everflame” here: https://www.belgianmetalshredder.be/reviews/165.

“Aperture” is the intro to the “Obscura” album, making you eager to listen to this release by the literal sound of a ticking clock. The first real song that Gallia unleashes in this album is “Return of Time” and is a varied tune with upbeat parts but also slow and dreamy parts. It starts orchestral, but evolves in some rhythmic fast past song. The vocals sound mysterious but piercing and give the song a dreamy atmosphere. Next up is “Blackout Queen”, this tune is quite rhythm driven with pounding drums and a snaring bass. The vocals are cleaner and quicker. This tune has a hint of power metal and a flair of thrash. This song has a very serene interlude before ending with a bang.
The third track is called “Mirage” and starts as if you walk into a circus. This song feels like you would hear it in a nightmare where you can’t get out of, it also gives off an atmosphere of depression or giving up on life. The track sounds like a happy circus tune when the story is happy, on the other hand the track sounds ominous and depressing when the story shows its dark side. “Reflection” sounds like it could come straight out of a dark adaptation of Pinocchio. This song is sung quite snarly and angry which only amplifies the atmosphere. The backing vocals have an echoing effect that makes the song even more ominous. The song ends in a metalcore kind of way thanks to the breakdown section.
The following tune, “Path of the Nomad” is more symphonic power metal, with the vocals being the symphonic part and the guitar work having a power metal inspiration. This tune has a solid pacing because of this tune’s versatility. The sixth track of “Obscura” is called “Free Me” and is a folk inspired interlude to lighten up this album. It still maintains that mysterious atmosphere the album has, but is a more light hearted and dreamy. Next up is “Spirit of the Sea” which remains folky but also a lot more guitar driven. It feels a lot like an anthem that could be heard among pirates preparing for a long trip or battle. The slower part in the middle of the song on the other hand could be the siren call of a group of estranged mermaids.
“Chaos” is a more mesmerizing tune that draws you into its chaos. The instrumental part feels like some kind of wakeup call as if your mind is trying to get out, but then the song draws you right back in with Middle Eastern chanting to end with a bang and draws you in completely. Following up with “Euphoria” that continuous the Middle Eastern feeling to then evolve into a release of energy much like a true euphoria feels: happy, abundant, a relief after a hard time… The vocals also sound a lot happier and more upbeat, much like the guitars that are very fast paced. The drums guide this happy feeling by being very fast too.
The tenth track “Tears of Gold” is a much darker track which starts with some chanting to then evolve into snarling vocals on a hard back track intertwined with tribal like percussion. This track is quite long and has a very threatening middle part, making it even darker. But then it evolves into a very powerful guitar solo supported by slower drums, after this solo the song ends on a positive note. To then be concluded with tribal chanting.
Last but not least is “New World” is a very serene tune to end the release in a very calm and conclusive way. The vocals are very soft and soothing which gives a nice contrast with the hard and heavy tunes that preceded this one. The middle of the song is a fast paced but still light part that shows the quality of this band very well, showing that even in a single song they can be very diverse. This song ends in one clean, high note and in that way concludes this “Obscura” album.

This album is a true hidden gem, I find myself going back to it again and again. It’s very diverse, one moment you’re listening to a light and happy tune, next you’re listening to a dark and heavy song. To me, Gallia’s “Obscura” is a breath of fresh air in the saturated world of symphonic metal. Definitely an album to check out if you love Epica, Two Steps From Hell and recent Nightwish. Gallia as a band is a beautiful example that symphonic metal doesn’t always have to be orchestral, operatic or slow but that it also has a darker, harder and more intense side. Headbanging comes natural when listening to this release and it does get stuck in your head.