The world of Kaledon awaits you! 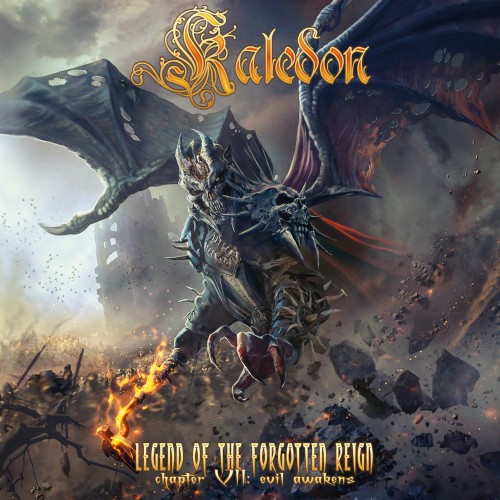 First of all, is it necessary to present Kaledon? Apparently yes! And it still surprises me that a band that has already 24 years of bottle still has to be presented! So, we agree there has been... as if it were movement in the lineup over the years, but name of a monocephalus with glasses... 5185 followers on spotify! 1690 on youtube with a channel created 16 years ago! While they have 17000 followers on facebook... I don't get it! What does the world feel the need to put real content creators far behind the big-breasted bimbos who sell you their farts?
Finally, this consideration of past value, what is it about? It's about Kaledon, an Italian power metal band. Active since 1998, but really since 2002 (when they released their first album "Legend Of The Forgotten Reign - Chapter I: The Destruction"), the band has known many lineup changes but now here's Chapter VII of the epic story set in the fantasy world of Kaledon. Well, ok, the last album was made in 2017 and let's be honest, the habit of frequent changing band members band changes must have scared a lot of their fans while waiting for this album's release! But they're back with a new line-up. The old ones are Manuele Di Ascenzo (drums), Alex Mele (lead guitar) and Tommaso Nemesio (rhythm guitar) who have been joined by Paolo Campitelli on keyboard in 2013, Michele "Meek" Guaitoli on vocals in 2015 and most recently Enrico Sandri on bass in 2017.
Now that we know who's who, we only miss the "invisible members:" the Ottava pop choir, and the man behind this album's cover art, Oleg "Voodoo" Shcherbakov, and his work here is ma-gni-fi-que!! Seriously worthy of be among the most gorgeous looking Magic the Gathering cards! Big fan! Oleg has a resume as long as that of Al Capone in terms of art covers, and frankly... as the young ones would say: he's the real deal!

1) Renascentia Noctis: an electro intro that goes on for about a minute... the epic electronic pouding tunes remind me a bit of the theme of Terminator 2 but overall it's an intro in which I still wonder where the call to guitars and metal is.
2) At the Gates of the Realm: A bit messy at the beginning, but this track becomes clearer as it goes along to become what it is supposed to be: epic power metal!
3) A Strike from the Unknown: same construction but a little more violent to even ultra violent close to the thrash at the beginning... but we feel the epic coming back very quickly... the frantic speed always remains there, a real fight between the two voices... the heavy guitar behind it all doesn't put us necessarily at ease but let me reassure you, it's mastered!
4) The Eye of the Storm: For me, this is where the fun in "Legend Of The Forgotten Reign - Chapter VII: Evil Awakens" really starts. It's enraged but well managed, the chorus is powerful and engaging, the electro part is punctual and limited to the bare necessities, the guitars are at the top and the interaction between them and the keyboards is just well done! I take real pleasure in listening to this masterful track!
5) Emperor of the Nigh: brings us back in a heavier atmosphere to begin this over 7 minute long track. Then come the guitars howling to the moon and a voice that a little bit like "the Scorpions." We feel to leave for the ballad of the album, yes, but no. Because it does not take long for this track to change the pace and push in the towers and leave in the power well dirty (in the good sense of the word). A title a little, how to say? It remained stuck in my head head, but I also had difficulty in understanding its construction! In in a mere 2 minutes' time we change styles no less than 3 times (symphony, ballad, power), then during more than 5 minutes it is the power metal same thing. Not that it is bad but, technically I am a little lost!
6) The Dawn of Dawns: Well I really like it, it got stuck in my head quite easily, even if I have some trouble with the double tempo chorus/drums around the 3:20 part. Otherwise, it's a good song! The beginning and the end of the song with the choir (Ottava pop choir) is really a good idea and also supports the sung parts very well!
7) Life or Death: a very special intro (dark symphonic with blast beats) but well, we will appreciate the try, conclusive? I let you be the judge.
8) The End of Time: a song that makes very good use of the chorus to support the lyrics, in fact the real singer here is the choir chants during that chorus and that adds great effect to song!
9) Blessed with Glory: A very powerful song wherein the choirs push Michele's voice to its limit. It's quite interesting the way they different ways in which they use the choirs throughout this "Legend Of The Forgotten Reign - Chapter VII - Evil Awakens" album! There's a little guitar ping-pong around the 3rd minute... and why not! We're really into the epic stratospheres here.
10) The Sacrifice of the King: This track annoys me because the chorus clearly makes me think of another track, but I can't find the name! Damn! That being said, yes, the song does work on all necessary levels! And even very well if we manage to disregard this impression of déjà-vu heard on during this track... no, I really like it, it's catchy, engaging... like all the other songs on this album in fact!
11) The Story comes to an End?: this is the track that I would have liked them to take as an example with softer, more engaging moments. And even if for me it's an excellent track, especially thanks to this female guest vocals and this sweet guitar solo, ... this little ballad moment (2:45 - 3:15) won't save the entire album! It's a pity because they understand the idea of a power ballad and know how to do it. 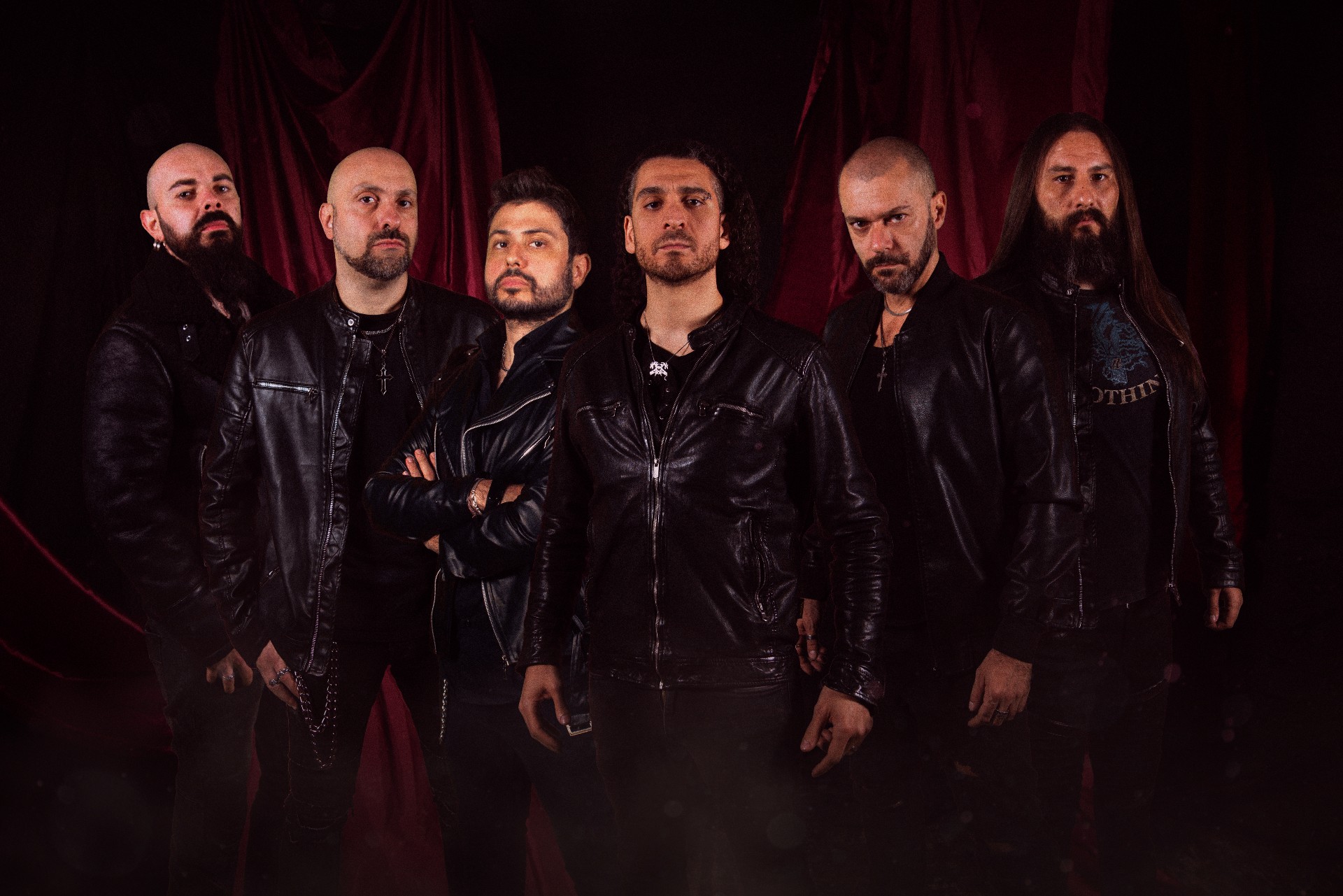 Well, yes, it's nice, I really enjoyed the tracks "Eye of the Storm", "The Dawn of Dawns" and "The Story comes to an End?" but, the album, for me, has its advantages that are interchangable with its disadvantages. It is homogeneous yes, but probably a little too much. No track on this album feels a little more vigorous or softer than the others, there's no "bridge" or transitional tracks, no track that truly touches the emotionial strings. I think the problem is that this album, for me, lacks nuance and too little contrast between the stronger and softer moments. Simply put, it's built a little bit like a traditional power metal album whereas they tell us a whole story! But in a movie there's a whole development with its passages of different intensity which allows the brain to rest and then to prepare for the massive assault which arrives in the following scene! But there's... none! And that's a pity.
For the rest, it is really good! The electronic elements with the keyboards are particularly well integrated with the guitars and the overall style and feel of the album! The imbrication of the chorus is managed really intelligently and with accuracy. The musicians do the job to provide what is necessary to this particular style of metal great intensity and Michele Guaitoli has the right operatic and Dio-inspired vocals for this kind of music as well.
In short, it is by the staging that for me the album lacks! Because listening to the whole album is really difficult despite the intrinsic quality of all the tracks and the band itself! They would have made only one title with all by putting a small bridge of 2 seconds or 3 notes between each and that would not have changed much. But a 50 minute album that's basically one song split into many different parts... that's long. Too long for me. It's really a pity because I feel like I missed a great album. I hope that for episode VIII and IX they'll have corrected this "detail" so that we can really enjoy Kaledon's style in the best way possible.
To make a sentence: Very good but too much stuck in the same intensity. If you listen to a track or two at a time with an interlude before moving on to the next two tracks. Kaledon's "Legend Of The Forgotten Reign - Chapter VII: Evil Awakens" is a intense and well-made power metal album that could've been more diverse than it has eventually become. But what it does, it does very well! Recommended for full-blooded power metal fans in particular.