No price too high to pay 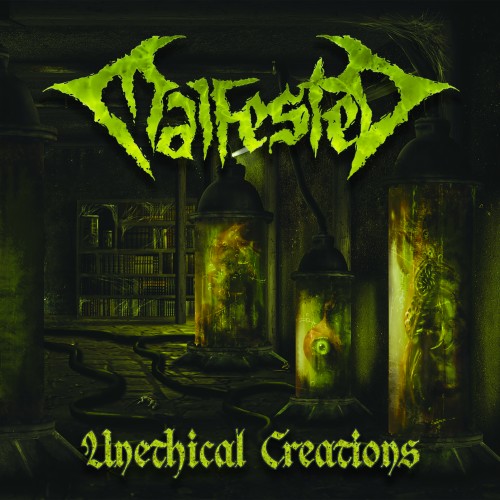 Review written by David Hardy.
Over a year ago and a half ago Stijn “Metal Shredder” was introduced to Malfested and he reviewed their 2020 debut EP “Shallow Graves” (read his review: https://www.belgianmetalshredder.be/reviews/252). And now it’s my turn to launch myself into the hazardous and personal treatment of the "Malfested" case with their new EP “Unethical Creations!”

So it all starts like an episode of "Little House on the Prairie", with hair blowing in the wind and the sun shining down on us... no, I'm just kidding! Seriously, the guys take us to an underground laboratory with stories about genetic mutations and the end of the world! No room for sunshine and Laura Hingals' smiles here! Even if the beginning of the track starts with a sweet old 78 rpm, the raging and possessed voice of singer Arne puts you straight into the right place!
Seriously, is this guy human? When was the last time he had an encore against rage? Voices from the best horror movies coming from the same body! And the music that goes with it only reinforces this vicious and aggressive heaviness! Note, we feel, from this first track (named “By Hateful Design”), that there’s a real intelligence in the construction and the arrangement of the song! Malfested allow themselves more melodic moments, moments that completely destroy, moments for ascents, descents... very intelligent! It allows you to listen actively and to find nuance, which is very difficult in this type of music which tends to put everything on the same footing and which, by dint of always putting everything to the full, loses nuance and intelligibility.
The second track (the title tune of "Unethical Creations") surprises me! I'm convinced that they had the basis of a track that could have fit in a lot of other metal styles with some slight modifications! Really, there’s melody, construction, a very classic construction in fact... well classic but not for death metal... it seems that they want to lose us in their frightening labyrinth of foul beasts.
When I was reading the lyrics (I admit that my English is not good enough to understand everything orally, or rather gutturally), and when I made the connection with the music, I almost saw a love link between the creator and his demonic work, and it made me think of "Phantom of the Opera," specifically Brian de Palma's version. This love and this disgusting violence, this beauty in the music and this visceral relentlessness in Arne’s voice, it's quite traumatic when you think about it actually! A little problem I do have with this particular song is that it ends a little too abruptly for me.
The third track "The abhorrent Arise" touches me especially by means of its lyrics, which, if we extract the first part to concentrate on the rest, speaks only about human beings, war, and the question: "are we really better than animals or do we only seek self-preservation?” Each one will make his own answer, each one will look into his/her own heart and will believe, or not, in a "surgical" war and where "seen on TV" is not voyeurism but "information.”
Part of the lyrics: "an army send forth - ill prepared for this kind of war. Tanks ripped to shreds - men hacked to bits. Caught on film by watchful drones. The abhorrent arise! Bringers of imminent death." It obviously sounds different now given the current state of world affairs. The haunting riff would be something like a : C# C LA LAb / F# G# G# LA G# which is a harmonic minor mode, which gives it a bit of an Arabic and melodic feel. This also allows a fast play even if technical. In musical terms, you can smell the bombs, you can smell the sulfur, and you end up with a touch that more delicate bands dealing with the theme of war would not have denied.
So, if I'm not mistaken, the ending of this “The abhorrent Rise” track is on the beginning of the next one, called "Scorched Earth", it's a bad start guys! This track shows once again the quality of the lyrics! I suspect that the author finds in this dystopia a way to spit out his truths in the face of the world without taking a lot of it in his turn! In fact, this whole title is a deeply dark poem of truth about the human soul and its fatal final fate. I wonder if, sung by Patrick Juvet with a little 20 cent disco, the "good" people would realize or dance to this tune without trying to understand what they are being told so abruptly? Musically, I'm less thrilled, it's fast, but less researched musically or in the construction. It's not bad, it's just more "normal" and less elaborate and "delicate."
With "Last light of a dying Ember" we finish in apotheosis! A music and a text that both really top in every factor I can think of. Atmosphere, composition, delivery. It’s death metal that’s deep yet easily enjoyable. And one of my favorite tracks on this EP. A really good ending to a great EP.

Malfested embarks us in a dystopia of laboratories, of monsters that are going to destroy the planet and win over humanity but in a nutshell, and according to me, they are only talking about ourselves and this sick society that is about to win like a virus over the world. In short, what they tell us (which isn’t very positive) is that either you become like them on your own (insensitive and pitiful) or you die. Not very cheerful, ... but it's their vision and I respect it. To those who have seen/read George Orwell’s iconic "1984" novel, the moral of this story remains the same but told in a different way.
I mainly remember "Unethical Creations" and "Last light of a dying Ember" which are for me probably more melodic and more "accessible" because of this. I, who am not a big fan of the style (death metal), enjoyed listening to this album and really, really enjoyed reading the lyrics which are not only in the metaphorical style of the album, but also full of barely hidden meanings, unspoken truths, calls to rebellion and dark poetry. And it's Belgian! Eat Belgian, it's good for you!
Simply put, Malfested have made an excellent successor to their 2020 debut EP with another EP that shows a refined, melodic, complex but also very accessible death metal sound. Add to that lyrics full of barely hidden meanings, unspoken truths, calls to rebellion and dark poetry and you’ve got yourself a band that even those who don’t like death metal very much will definitely enjoy!