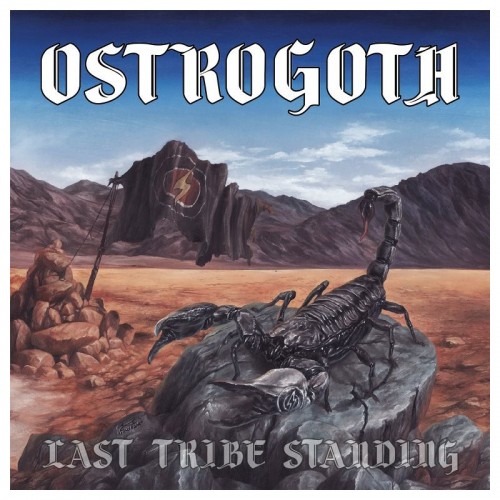 I was very thankful when I heard that Ostrogoth had returned to the stage back in 2012. I first heard Ostrogoth in the heavy metal video game Brütal Legend as their classic song Queen of Desire was featured on the game’s soundtrack. Eventually I saw them perform live and I was very impressed. I also was very happy to hear that they were working a new album, no less than 28 years after their last album, Feelings of Fury. And the final result, Last Tribe Standing, is more than awesome! Last Tribe Standing is a unique album in the sense that it’s actually two EPs in one. The first half of the album features brand new tracks while the second part is a live rendition of the band’s iconic debut EP, Full Moon’s Eyes. These live tracks were recorded somewhere in 2014 and feature the entire LTS line-up. For the sake of clearness, this review will talk about both parts of the album separately.

The Stredding Basics + The Sharpest Shreds

For the newest tracks, Ostrogoth clearly returns to the classic heavy metal style they had during the time they made their first two albums. Fast, energetic and easy to sing along to! Therefore, it’s no coincidence why the album’s opening track is called No Risk Taken. It’s a bit slower than the other tracks on the album, but it’s a great warm-up for things to come! The second track, Clouds, definitely is my favorite out of the four LTS songs. Like Mario said in the interview I had with him last month, Clouds perfectly summarizes Ostrogoth’s style. It’s fast, aggressive and blood-pumping featuring razor sharp guitars, quick drums and vocals so epic it makes you raise your fist and sing along with Josey. The other two tracks, Return to the Heroes Museum and the album’s title track, take things a bit slower, focusing more on technical, razor-sharp guitar riffs rather than on brute, full-out speed. And speaking of guitar riffs, Rudy and Dario truly deliver really captivating performances in this album. Their styles are very melodic and feel similar to what guitar heroes like Dimebag Darrell and Randy Rhoads could've dug up. And when you think about the fact that Rudy was already severely weakened from the colon and liver cancer that eventually took his life mere months after recording, his work is even more worth the praise. His finesse and determination is shown in all its glory in Last Tribe Standing and I’m very thankful that I saw him perform one of his final Ostrogoth concerts back in September 2014. A beautiful swan song indeed! But let’s not forget the other band members because they also gave it their best for the album. Josey sings his vocals with great passion and conviction while Stripe and Grizzly keep things fast, smooth and tight with their bass and drums respectively. The band clearly knows what they’re doing and they give the fans exactly what they want. And that is heavy metal straight from the glory days of the 1980s.

The primary theme for Last Tribe Standing is survival. Standing tall in face of death and opposition and eventually beating the odds. The title track, for instance, is about defending your principles and way of life no matter the cost. The third track, Return to the Heroes Museum is basically a huge tribute song to Ostrogoth’s early days. Its lyrics and melodies are very similar to the classic Heroes Museum song, so it certainly is a nostalgia trip for the fans from those days.

Like Last Tribe Standing’s tracks, the album’s artwork also gives a clever nod to the good old days. As it features a deserted battlefield with a Full Moon’s Eyes flag in the background and the scorpion from Ecstacy and Danger sitting proudly in the foreground.

Now for the live tracks. I really love the fact that the entire Full Moon’s Eyes EP is featured here. Now young Ostrogoth fans (like me) finally have the chance to check out this epic EP. If you’re an Ostrogoth fan from back in the day, then you can immediately start raising the horns to songs like Rock Fever and Full Moon’s Eyes itself! Of course, the line-up is almost completely different from back in those days, but the live performance shows that Josey, Dario and Stripe have no problem at all to perform these classic tracks. I would even daresay that these live versions even outclass their original studio versions in sheer awesomeness! Like many other bands around, Ostrogoth play at their absolute peak when they stand in front of a live audience and trust me, I’m speaking from experience. My favorite among the live tracks? Well, it’s actually pretty much a draw between Full Moon’s Eyes and Rock Fever. Both tracks are so energetic and fun to listen to that it makes it impossible for me to actually make a choice. So sorry, boys and girls, but I’ve just used my cheat code for this one!

9 Whitesharks out of 10! It doesn’t matter whether you were already banging your head to Ostrogoth in the 1980s or wasn’t born yet back then, Last Tribe Standing is more than well worth listening to, no nostalgia goggles required. This album, and their live performances as well, prove without a shadow of a doubt that Ostrogoth, despite Rudy’s death and the band members more advanced age, are playing stronger and heavier than ever before. The last tribe standing indeed!