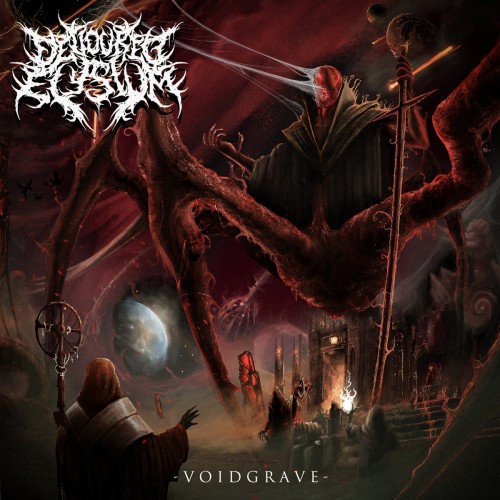 Review by Luk Michels.
Devoured Elysium, for some the band name might sound new, however they already penalize the world since 2019 with their first single “Slaughter For No Reason” which was later featured on their first full length “Extermination Policies” anno 2020. This was rather more slam without too many compromises. In the same vein they released a new single in 2021 by the of name “Deus Ex Machina”. It was directly clear they had grown musically and technically and added a techy/sci-fi vibe to it. Non-stop blast beats (at least the overall feeling), paired with typical slam patterns offered on a plate of riffing variations and brutal grooves. This single is also featured on their new album “Void The Grave” and holy f*ck, what an album this is. This is tech slam on a high level!
The vocal range of Kerem Akman is awesome and is oriented around bands like Katalepsy/Analepsy/ Devourment (Ruben Rosas) however keeping its uniqueness to name some famous slam bands. The drummer Atakan Kayman is a total beast if you hear the intensity of the blast beats. But my attention went to the fact that the guitars have an awesome offer of variations to it (taking in account there is only one guitarist: Güven Elban). Going from your typical slam riffs, paired with sometimes blackish styled chain reactions but always keeping a headbanging groove! 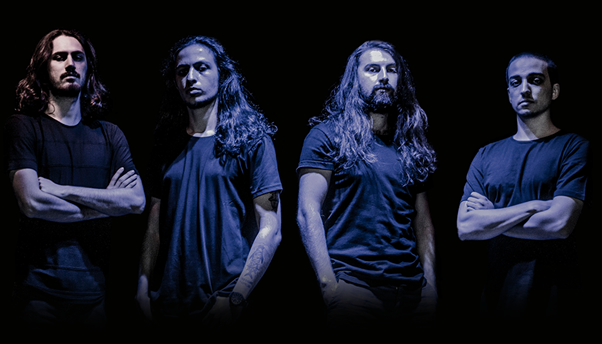 As from the moment “Master Mind” kicks in with a short drum solo and then peeling the skin of your bones with shredding tech riffs my ear drums woke up. It pounds, has awesome breaks and as with the other tracks, black metal riffs. This one has even a moment it gave a “One” vibe from Metallica and a brief bass solo “Hammer Smashed Face (Cannibal Corpse)” style (smile on the face). Next it goes fluently into “Green Screen Failure” with some clean guitars as intro and ominous samples. Definitely something straight up my alley. “Deus Ex Machina” starts off with a rather sinister intro sample accompanied with the typical guitar squeals which might become a bit overused at a certain moment. This however remains a total headbanger… BUT with “Slam Panzer” you just know your head will be slammed as you notice it’s featured by Traumatomy. Kirill Zarubin’s vocal assistance is of brutal addition, even when you thought the walls closed in enough, you now got crushed by this tank named after the German battle tanks of WWII. “Spinerender” is my personal least favourite on the album, remarkable, it’s also the shortest song on the album with 1:11 playing time. But “Oracle” and “Chrono-Shift” make definitely up for this song.
General conclusion: The production of this album is of a high level, but not overproduced however for a slam album it might sound that way.
With this "Void Grave" album, Devoured Elysium has grown from a rather generic slam typed band to a definitely way more tech in combination with sci-fi elements. There are only few moments that my focus disappears, due to the overuse of pick squeals on the guitar. If they want to top this album next time… They are definitely on my radar.
Score: 7,5/10