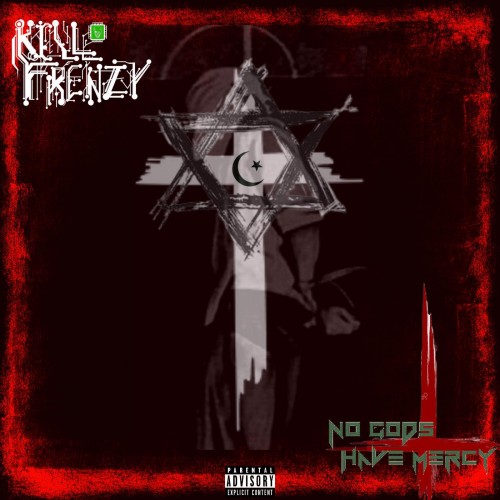 About a week ago Kill Frenzy contacted us to check out their new single “No Gods Have Mercy.” They kept their introduction simple with just a friendly greeting and links to the single’s music video and to their press kit. I’ve always liked it when bands contact us personally to shred through their work so let’s give this fledging band a very close look.

“No Gods Have Mercy” is the fifth single from the South-African thrash metal band Kill Frenzy and is released via Unscathed Records. The song has both a full and radio edit version and in this review, we’re looking at the full version. The single begins with religious speeches, one more threatening than the other and all trying to sell you to their respective faiths. Then the band comes in with slow, grinding riffs and equally slow, roaring vocals with occasional speedups of pounding thrash.
While Kill Frenzy’s earlier singles are enjoyable thrashers, I like this new single more. The slower beats and vocal deliveries in particular make the song feel very menacing and atmospheric. In addition, with this specific pacing the band’s riffs and lyrics are significantly more impactful, especially after a quick round of fast, old-school thrashing. “No Gods Have Mercy” has a solid beginning (those opening guitar and drum beats do a good job building up the tension) and ending (the instruments gradually fade away one by one at the end), two things that their earlier material missed.
While the production of Kill Frenzy’s material is clearly DIY (a philosophy they want to keep) they do manage to make their singles sound crisp and clear. These DIY elements add a certain rawness to their overall sound although I’m curious to hear how they would sound and feel like if they would be using a professional producer, maybe their sound would become even beefier.

The artwork of Kill Frenzy’s “No Gods Have Mercy” features a bloodied plaque with the symbols of the three main Abrahamic religions, Christianity’s cross, Judaism’s Star of David & Islam’s Crescent and Star slapped one top of the other. Nothing really special, but what I like the most about “No Gods Have Mercy” in terms of visuals is the accompanying music video!
The music video for “No Gods Have Mercy” features the three main band members dressed as clerics, each representing an Abrahamic religion. One is dressed as a Catholic priest, the other as an Muslim imam and finally one as a Jewish rabbi. The three clerics gear up on weapons and move to a field to fight and kill each other while a Buddhist monk mediates peacefully in the distance while also closely and subtly watching the battle unfold. Eventually the priest wins only to immediately get stabbed by a Tom Cruise look-alike (obviously a reference to Scientology).
If you’re easily offended by religious mockery then you better don’t watch the music video as it’s full of religious stereotypes and clichés. The priest secretly reads adult magazines (got to do something to get your celibate rocks off) & uses Catholic-fueled superpowers by the end (basically turning himself into the pope), the imam wears an AK47, a turban & a suicide-bomb jacket (and has a picture of his 3 bourka wearing wives) and the rabbi is more interested in money than anything else, even at the cost of his life. That being said, however, if you don’t take your faith all too seriously then you’ll find this to be a well-edited and funny video with a good spice of political incorrectness.

7 Abrahamic clashes out of 10. A solid thrasher that exchanges speed and frenzy for atmosphere and impact while also showing that a DIY approach can also lead to some well-produced material. Kill Frenzy is a fun band to check out, unless your easily offended by violence or religious mockery but if that’s the case, then why are you into metal anyway?