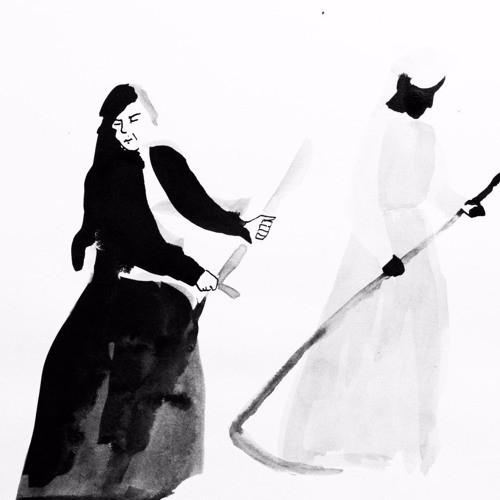 My first encounter with Mantis was during the Metaaldetector Festival in February 2016. A couple of days before, I listened to their single PYITDWYSS and I was compelled to have an interview with them that night. A few weeks after the interview, the band’s record label, Wervel Records, contacted me and gave me the Soundcloud link for their brand-new self-titled EP. That’s all, time to play!

Mantis’ self-titled debut EP has six instrumental tracks. The introductory tune is very ambient and peaceful, a frequently recurring element in the EP. However, the band does also enjoy fast, heavy rock as well, particularly in tracks like Muriel and Daeth. Overall, I’d say that Mantis’s songs feel very atmospheric. This isn’t the kind of music that will make you go all crazy and thrash the place up, but rather music that will make you sit down and relax. It’s like whiskey which, unlike beer, has to be tasted and experienced gently instead of throwing it all down your throat in a single gulp! It’s more like Tool instead of Slayer or more like Glenfiddich instead of Jupiler. Overall, Mantis keeps things simple but efficient. Noise rock injected with some classic heavy metal. I wish the EP had a bit more playtime but what I’ve got was very enjoyable!

Since this EP is completely devoid of lyrics (at least, I didn’t hear any aside from some faint chanting in the track Famine), there’s nothing to cover here. But I do want to say that the tracks on the Mantis EP do not need lyrics. The instruments tell stories for themselves. What stories is up to your personal interpretation. And if you really need lyrics, write your own lines and sing them out loud when you’re listening to Mantis.

The EP’s cover, made by Russian artist Katia Tkatch, is a hand-drawn image of two women. The first one wears black and holds something that looks like a sword, while the other is dressed in white and holds a scythe. My personal interpretation is that the black-clad woman represents life and the white-clad woman death. Except that the colors you would normally associate with life and death have been switched. Basic, yet original cover art.

The penultimate track on the EP, PYITDWYSS (short for Punch You In The Dick With Your Selfie-Stick), takes the crown here. And for obvious reasons. It was the first track I’ve ever heard from Mantis and made me interested enough in the band to have them featured here. And it’s a great track anyway! Beautifully going back and forth with heavy guitar and drum riffing with slow, harmonic parts. You can hear it in the usual part of my review!

7,5 white grim reapers out of 10. Mantis is an excellent representation of my philosophy that you don’t have to fill every single song with vocals to make it sound good. The six instrumentals Mantis are offering you in this EP are all well worth listening to! So don’t hesitate to check this band out!