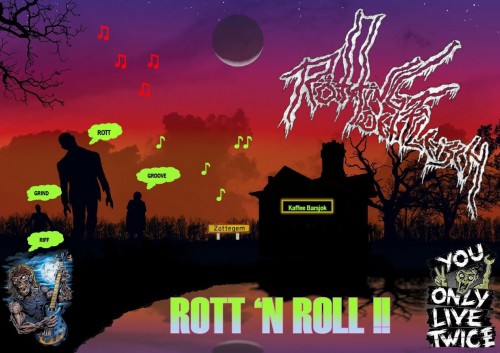 During the recently passed holidays we once again got contacted by the greasy gang from the town next door called Rötting Toet Fleisch and they told us they were once again releasing a new single on Christmas Eve. Since we had some slimy fun shredding their 2020 single “Corona Blues” (read our review: https://www.belgianmetalshredder.be/reviews/272) we of course couldn’t resist the urge to shred through the vomit, mud and grease the band has just “freshly” spat out for us all to taste.

“Rott ‘n’ Roll” is the second single from Rötting Toet Fleisch who, in 2020, rose back from their rotten graves to once again roam the caverns of the Zottegem underground just like they did over 15 years ago. The single begins with galloping drums and distorted, muffled riffs with mumbling vocals that are barely understandable. The band marches on throughout the 4 minute track with the same fatty combo intertwined with wah-wah guitars (featuring grinding undertones) and even a sweet solo near the single’s end.
Unlike their “Corona Blues” debut single, this new “Rott ‘n’ Roll” tune is a more straightforward affair. The drums being particularly effective since they made me joyfully headbang. The song has a huge pulp horror action movie feel to it that remind me of movies like “From Dusk Till Dawn” and “Planet Terror.” While I had fun listening to “Rott ‘n’ Roll,” I still prefer the more brooding and darker feel of Rötting Toet Fleisch’s earlier “Corona Blues” single. But to the credit of “Rott ‘n’ Roll,” it does have a solid ending guitar solo, something that “Corona Blues” lacked.

The colorful cover art features a forest and lake setting at dusk with a bunch of zombies strolling towards the creepy Kaffee Barsjok house near the brightly lit Zottegem sign. The name Kaffee Barsjok refers to an old bar in Zottegem that was very popular among the local population (the site of the café now hosts a restaurant called Le Sablon). I recall the name of the café but I don’t remember whether or not I ever set foot there but I’m pretty sure the Rötting Toet Fleisch guys being a regular visitors to that place.

7 Barsjoks out of 10. A more straightforward & light-hearted tune compared to their Christmas 2020 single “Corona Blues,” but still featuring the same low-fi production, greasy vocals & beats. Once again an entertaining goregrind from Rötting Toet Fleisch and we’re hungry for more.