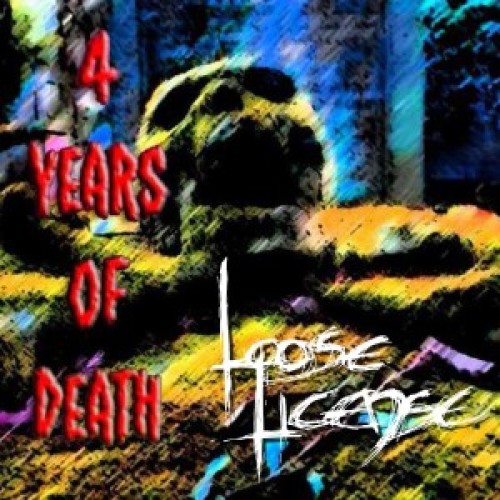 Pietn and I have recently become friends on Facebook and we introduced our projects (Loose License and the Belgian Metal Shredder respectively) to each other. And so, Pietn offered me to review Loose License’s debut release, 4 Years of Death. After watching the music video the band created for the album’s title track (which you can find in NOW BANG ALONG), I had my hooks into the band and thus I was more than willing to pop up a review for them. Time to dust off my war helmet, grab my Mauser rifle, hit the trenches and smell the stench of lethal mustard gas!

Loose License is a doom metal band from the region of West Flanders. If you dig early Black Sabbath material like Hand of Doom and Electric Funeral or more recent work from bands like Sleep then Loose License is right up that same track of darkness and damnation. So overall, Loose License’s sound is exactly what you can expect from a doom metal band. Slow, down-toned, whaling guitar distortion combined with gently yet threatening drums and howling vocals and growls. Although most tracks on the 4 Years of Death album are six minutes or longer (with the title track going well past the ten minute mark) they don’t feel overly long or repetitive because the songs either put the vocals or the guitar riffs at the foreground of the act. You know what? I’d say that the deep, chilling guitars riffs are the main reason why the songs on 4 Years of Death feel so compelling and atmospheric.

A variety of grim subjects are offered here. The opening instrumental track, Habemus Satan, describes a Satanic ritual (yes, a stereotypical ritual featuring demonic chants and probably human or animal sacrifice), the succeeding track, Dark Blood, is a story told from the perspective of a vampire seeking young, female blood. Other topics include World War I (the title track, more on that later) and cremation (Funeral Procession). And finally, the band covers the song Dragonnaut from the doom metal band Sleep, which I already mentioned earlier in the review as one of Loose License’s musical inspirations.

The front cover shows a skull and some bones lying in front of a tombstone. The cover is overly colorful and but still pretty nightmarish, mainly because of how the skull is seemingly screaming towards the skies in sheer terror! But personally, I would’ve rather seen a full WWI graveyard with skulls and bones scattered all over the place. Or trenches filled with mutilated corpses and yellow mustard gas clouds covering the entire scene. In my opinion, that would’ve been a much better visual representation of the title track. Other than the trippy front cover, there are a few black-and-white pictures of the band members visiting a WWI graveyard in West Flanders. Finally, there also are a few colored images shot during a Loose License gig. One photo shows a WWI soldier equipped with a knife bayonet rifle and a gas mask. Another colored picture has one of the band members dressed as a Satanic cultist showing the devil’s horns to the audience. Finally we have individual pictures from the album’s lineup posing for a mug shot before being transferred to Alcatraz. Hopefully they’ll meet Clint Eastwood in there. He knows how to get out of there.

The album’s title track made the biggest impression on me. The song begins with a joyful military marching tune but gradually the sound of air raid sirens, machinegun fire and explosions take over. Than the shrieking bass and pulse pounding drums kick in and Brocki recites the iconic In Flanders Fields poem. It all helps in creating a dreary sense of loneliness and despair. Yeah, you get the idea, this isn’t your typical Sabaton-like heroic war metal. Fuck no, this is WAR! Death, senseless violence and destruction, hell on earth! War in its most realistic and therefore most gruesome form!

8 WWI poppies out of 10! Loose License’s 4 Years of Death is an album that I can warmly recommend to everyone who wants to dive into some old school doom metal, or into mud-filled trenches, or both!

Here’s the band official music video for 4 Years of Death’s title track. If you’ve played the RTS masterpiece Command & Conquer Red Alert then the opening tune of this video will sound very familiar.