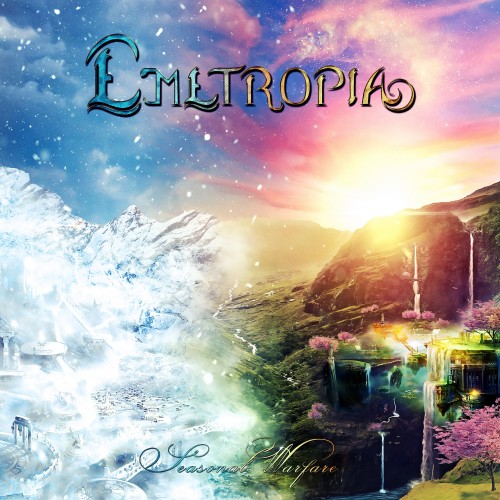 Looking for some new material to shred, I came across this song in our mailbox. It sparked my interest at the first two words of the mail’s title, them being Swedish and symphonic. Two things that I enjoy a lot.
“Seasonal Warfare” is the second single to the upcoming Emetropia album “Equinox,” which will be released independently early 2022 and is sent to us by Mike de Coene from Hard Life Promotion. “Seasonal Warfare” is a re-imagined version of the song as it was featured on their 2018 debut EP “The Procession Of Kings.”

The first time I listened to the song I had to adjust to the soft, rather generic sounding vocals but after a couple more listens I found that the vocals are not just soft but also serene and soothing to listen to, which is quite a contrast compared to the other, more hectic elements of Emetropia’s sound. The intro of this track has roaring guitars and angelic keyboards. In the rest of the tune, the keys kind of disappear into the complete symphony without resurging ever again. I think the keyboards would provide a bigger contribution to the overall roundness and fullness of the band’s sound if they were used more prominently.
The pounding bass and roaring guitars give this song an early Nightwish sound, in other words, less orchestral and more streamlined power. But at the same time they also give the music a little thrash feeling. The biggest difference between Emetropia and other symphonic acts is that they are quick and fluent where others are more operatic. Overall, the song has a frantic but also tragic feel to it, as if the band is gearing up for war and are well-aware that they may not live to see another day.

This “Seasonal Warfare” single is more than decent and I will enjoy listening to it frequently. There still is some room for improvement but they’re getting there and they’ve left a very positive impression. Emetropia channels a lot of energy in this song and they have great potential. I would definitely recommend this band to fans of early Nightwish and After Forever.