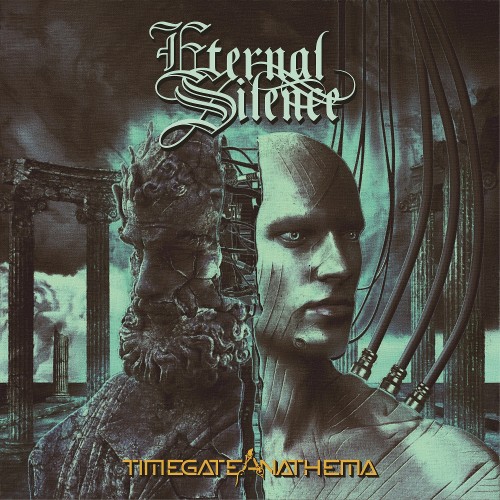 It has been a while since I’ve written any reviews since the past few months I was very busy with my final exams for my bachelor degree in biotech management (I’ve successfully passed them all). And to celebrate this, I went through our mailbox to find new stuff to shred. And the first one for me is the new album from the Italian symphonic metal act Eternal Silence called “Timegate Anathema.” Released via Rockshots Records & sent to us by Jon Asher Media Relations.

The first track is called “The Way of Time” and is an up-tempo track that is a great preview of what’s to come on the following songs. A blend of orchestral melodies and roaring guitars with angelic male and female vocals. This track’s instrumental parts are nice and serene with a hint of damnation. The following song is “Edge of the Dream” and has a short, powerful intro. The omnipresent violins add a cinematic flair to this track. The female vocals are a bit snarly in the verses, whereas the male vocals are clean throughout the song which give it a clear power metal vibe. The song eventually picks up speed and intensity and finally ends with a small bang and that suits the song very well.
Next up is “Ancient Spirit” a medieval folk tune fitting for a band like Delain or Within Temptation. The rhythmic drums and guitars make this a head bobbing tune. It’s a symphonic anthem that’s very guitar driven and thus making it deliciously heavy. The fourth track is “Heart of Lead” which would fit perfectly in a fantasy movie on the all-is-lost moment. It gives off a desperate but at the same time confident vibe. Another multifaceted track as is usual for Eternal Silence.
Following is a ballad named “Lonely.” The guitars in this song are intimate and serene. While the drums stay in the background, they still make the song. Without them the song would be monotone and a bit boring to some. Next comes “Glide in the Air” a much more up tempo tune with an electronic side to it. The galloping guitars in this tune make it very rapid and energetic. The vocals are very high-octane and at moments almost operatic.
The seventh track is called “Rain” and has, quite like the previous track, a bit of an electronic side to it. The vocal harmonies are very clean and pure which gives the track a calming atmosphere despite the underlying intensity of the instruments. The following song, “My Soul Sad Until Death” is a true symphonic metal song with operatic vocals and speedy riffs. The interlude is slower than the rest of the song which gives it a real breathing break.
The acoustic tune “Firefly” is the shortest track of this album and is done before you know it. It’s a very modest song that would be perfect to escape the daily dreads of life. The very last tune is called “Red Dead Masquerade.” Via this tune, the album ends with a bang. Once again it’s a roaring and operatic song with beautiful duets, powerful symphonies and guitars that are very characteristic for symphonic metal.

This album is a multilayered album that still comes together as a whole and has a clear fluency. The intriguing guitar riffs and the pounding drums make it a head-bobbing album and the clean vocals give the music a “floaty” atmosphere. The mixed male and female vocals make the album particularly interesting. The sound of this album gives off a very clean symphonic vibe, as seen in bands like Within Temptation and Delain. Great stuff if you’re a fan of those iconic acts.