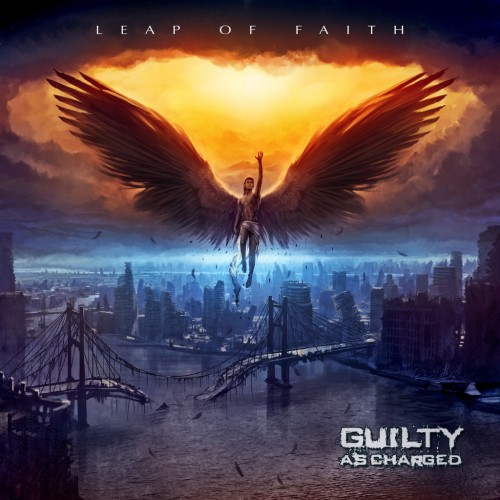 I first met Guilty As Charged during Rock Balegem 2014 in which they played as the opening band for a kickass night featuring nothing but Belgian metal goodness including Ostrogoth, Spoil Engine and Diablo Blvd. While arranging for an interview with the band, Heinz suggested me to review their first full-length release: Leap of Faith. And who am I to refuse such an offer? Especially if it’s one I can’t refuse.

If the early Metallica, Megadeth or Iced Earth is your thing, then Guilty As Charged’s Leap of Faith will offer a familiar experience. It already starts with Jan’s vocals, who shouts just as angrily as James Hetfield did in the first four Metallica albums. The technical guitar solos of the album that Dempsey has spread throughout the album’s songs have an Iced Earth inspired power metal feel to them. Fast, melodic and epic sounding and, alongside the vocals, one of the album’s highlights. This mixture of gritty thrash metal and epic power metal remains consistent through the album, although the song I’ll Never makes a drastic departure from the other tracks on the album. More on that song in The Sharpest Shreds. The instrumental Elysium is another tune that sticks out from the rest, because it’s a relaxing and melodic track that acts like some sort of break from the hard-hitting action in between. I wished the instrumental had been longer. It only lasts for about three minutes and I wouldn’t have minded if the band added a few more minutes to this track!

As Jan told me in the interview I did with him and the other guys from the band, Leap of Faith’s lyrics are mainly inspired by modern-day issues like media propaganda and extremism (Preach to the Masses), social prejudices (Lack of Control) and child abuse (I’ll Never). However, other songs on the album, like Last Chance and Leap of Faith’s title track, feature a more positive look on things as they deal with taking your own life into your own hands and finding your own way. No remorse, no regrets.

I really love Leap of Faith’s artwork. It features a winged man flying away from a nuked city (possibly San Francisco because the bridge looks similar to the Golden Gate Bridge) and towards the sun. Maybe the winged guy is Icarus, the young man who, according the famous Greek legend, escaped the city of Crete using waxed wings but fell to his death after prolonged exposure to the sun’s heat had caused his wings to melt. Or maybe he represents the idea of being free from social norms, metaphorically taking a leap of faith and flying towards a possibly more fulfilling life. It’s all up to personal interpretation.

Leap of Faith’s title track and the album’s fourth track, I’ll Never, have been the main points of interest for me. The title track has excellent, highly technical riffs and the song I’ll Never features Jan providing his best vocals out of the entire album. He shouts his lines in a very angry and determined voice, fully convinced that he will be a better father to his child than his own father was to him. As I already said, I’ll Never is also very different from the other tracks on the album, as the song features highly distorted guitars in addition to more aggressive vocals. I hope that Guilty As Charged will make similar songs like I’ll Never in future releases.

9 Icarus wings out of ten. A very enjoyable album from a band that is starting to make their mark on the scene. Like the Big Four did thirty years ago, Guilty As Charged manage to carefully balance raw aggression with technical proficiency and the result is a little gem of an album. Highly recommended!

Here you have Leap of Faith’s title track as well as the music video for the album’s fourth song, I’ll Never.
Leap of Faith - Guilty As Charged