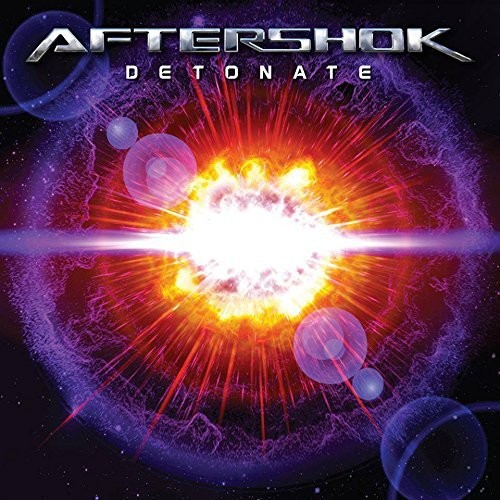 Review originally written by Stefan from Metal To Infinity. Album released via Auburn Records.
All those into US Classic Heavy Metal are (or should be) familiar with Midwest metallers Shok Paris featuring legendary frontman Vic Hix and shred specialist Ken Erb, right? Speaking for myself, I still play their famous debut “Go For The Throat” (1984) on a regular basis as well as I’m still fascinated by following efforts “Steel and Starlight” (’87) and “Concrete Killers” (’89). Albums that stuck in my collective memory, Shok Paris will always be one of my favourite cult US Metal acts ! Damn pity they no longer exists but there was light at the end of the tunnel when Aftershok began its quest halfway 2006. Bonded by the forces of Classic Hard Rock and Heavy Metal music, Vic Hix and guitarist George Mihalovich teamed up to form Aftershok. It took a threesome years to find the right musicians, drummer George Borden and bass player Nick Gryzka joined forces as one.
Back in 2002, they made their debut with the independent record “Unfinished Business” followed by the sophomore “Burning Chrome”, launched by Auburn Records three years later on. I’m very familiar with this last mentioned recording, a wonderful effort that offers all the very best in US Classic Heavy Metal music. This album proved that vocalist Vic Hix was still in very good shape, the on- or what age did not have a negative effect on his voice… one of my all time favorite singers for sure ! The musical aspect of “Burning Chrome” achieved high returns, a highly recommended piece for the true fans of old school Heavy Metal in the vein of Dio, Judas Priest, Accept, old Leatherwolf/Savatage and of course, Shok Paris ! Since the creation of Aftershok, they’ve shared the stage with Savatage, Y and T, Judas Priest, Yngwie Malmsteen, Lizzy Borden, Dio, Iron Maiden and many, I mean many others. Skipping to May 20, 2016 – the day Aftershok’s newest record called “Detonate” saw the crack of dawn and take it from me, this one might be their best effort up-to-date!

What affects me deeply is the fact that Vic Hix is no longer part of the band… if I’m good informed, he returned to his first love, Shok Paris. Canada based newcomer named Gord Shreffroth takes over the vocal duties, the rest of the line-up remained untouched. To replace someone like VH you have to be very very good, he carries the statute of a world famous/very unique frontman so now it’s up to replacer Gord to act the same way. Almost an impossible task to complete in my opinion but you’ll never know… read my thoughts on the new vocal service and more with regards to Aftershok’s third output entitled “Detonate”, released by legendary US Metal specialized label Auburn Records !
The production is highly acceptable as the mastering of the 13 presented songs was done by Maor Appelbaum (Yes, Halford, Hirax, Geoff Tate’s Queensryche, Amored Saint and many others), engineering by Jim Dofka of US Metal specialists Dofka. Would I prefer this new Aftershok effort above his predecessor? To be honest, I would ! The pipes of Mr. Shreffroth take me in tow through different ways of singing, mostly very clear but the high and low notes reach a broad spectrum. To keep a long story short, he does remind me of Jeff Schlinz (Wülfhook), Todd Micahel Hall (Riot V) and FireWölfe’s David Fefolt… guys well known from the almighty US Metal scene ! “Detonate” also sparkles due to the superb guitar works of founder George Mihalovic. Like he did on the band’s previous works, he really takes me by the throat once again as a flood of excellent melodic & harmonic riffs, hooks and leads take place across the entire album, fans of shred guitar actions are hereby invited to check out most of the tracks. Rest assured that the drum and bas actions are delivered in a very orderly manner as well, the current musical situation for this band looks bright and gives perspectives for the future definitely.
FYI, the term US Metal brings justice to its name while listening to Aftershok and those trying to compare this mighty gem with Euro Power Metal are totally wrong. I have a real preference for USM and have a big respect for EPM but the difference between these two styles are a long way removed from each other…that’s my point of view you know. On the other hand, I must admit that Aftershok would perfectly fit on the bill of mighty German based Metal events like Keep It True or Headbangers Open Air, festivals where old school Hard Rock and Metal from all over the globe gather as one big family!
My heartbeat rages on with the outstanding faster, headbanging ones ‘Hang ’em High’ and ‘Under The Gun’ while ‘Rise’ opens with a superb riff in the vein of Rainbow’s classic ‘Kill The King’ continuing in the good old Fifth Angel/Q5/Dokken tradition. Magnificent vocals and the stellar guitar works hijack all my attention! Watch out for the beautiful, mid-paced compositions ‘When The Shadows Fall’ (one of THE highlight to me!) and ‘In The Eye Of The Storm’ where purebred US Classic Metal reigns supreme. Pay some extra attention to ‘The World United’, very strong Metal track with over-the-top drumming. Let yourself be overwhelmed with the mighty strong Heavy Metal anthem ‘Forever In Metal’, raise your fist and sing along folks! Last song ‘Cities On Fire’ let my heart rate increase again due to its pure US Classic Metal character, what a great performance !
Aftershok’s ‘new effort “Detonate” might sound old-fashioned and unoriginal for some of you out there, to me it’s just a masterpiece that makes me feel impressed, proud that I have never denied my faith in US Metal music…. I never will actually! Fans of good old Judas Priest, Dokken, Dio, Firewölfe, Fifth Angel, Shok Paris, Riot V and stuff… place a quick order via the band’s official homepage at: www.aftershok.com One thing’s for sure, when you do – you won’t be disappointed at all. “Detonate” certainly gets a well-deserved place in my own Top 20 album list at the end of the year . US Metal Still Reigns Supreme !!
My rating: 90/100 (Surpasses the style of music, must be heard/ordered by every Metal fan)