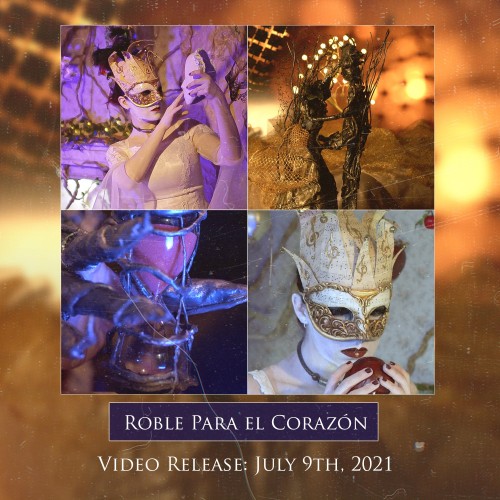 Fabulae Dramatis is a band that I’ve been following for a few years since reviewing their 2017 album “Solar Time’s Fables” a very long time ago (read it here: https://www.belgianmetalshredder.be/reviews/74).Over the past months the band has been keeping me actively posted about their current activities and they invited me to pre-watch their brand new music video for “Roble para el corazón (Wood)” which is now available for everyone to watch and listen to. And Fabulae Dramatis requested me to give my thoughts on their newest visual endeavor, so here goes the shredding! Vamos!

“Roble para el corazón (Wood)” is the fourth single and subsequent music video from Fabulae Dramatis’s second album “Solar Time’s Fables.” The song itself is a pretty special song in the band’s already varied discography, since most of the song is in Spanish and features tango-dance tunes. Unlike most of Fabulae Dramatis’s other songs, this tune is particularly peaceful and soothing in terms of beats, vocals and atmosphere but eventually the heavy riffing that’s an equally important part of Fabulae Dramatis’s sound emerges to harmoniously play along with the other, already present instruments. A sweet tune overall that would fit very well as music for a tender and passionate love dance with a nice touch of heavy metal.

As always, Fabulae Dramatis managed to provide a beautiful harmony between the usual metal elements and unusual melodies, vocal deliveries and instrumentation. It’s exotic, but it still feels strangely familiar for a headbanger like me. And if you like metal tunes that isn’t afraid to push boundaries then Fabulae Dramatis is one sweet band to check out. And now it’s time to talk into much detail about their music video. 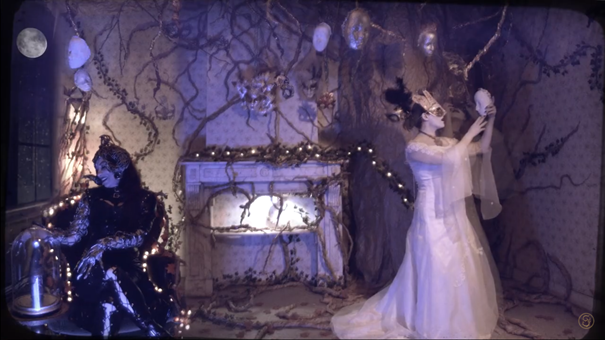 As with their previous music videos, Fabulae Dramatis has once again made a colorful and intriguing mini-movie using little resources but a ton of creativity. The whole music video takes place in a single, dimly lit room only featuring the band’s leading lady Isabel (wearing her signature horned helmet and clawed gloves) and the Harlequin character who was also featured on the cover of the band’s 2012 debut album “Om.”
The video switches between images of Isabel performing some magic tricks with an hourglass underneath a glass bowl and the Harlequin character waking up and exploring the decaying room (decorated by plant roots, apples and Venetian masks) before finally eating a (poisonous) red apple. There are also a couple of stop motion effects including a dancing couple made out of tree branches.
As the music video progresses the sands in the hourglass gradually fall down which causes the room to fall into further ruin, the aforementioned red apple to rot and the Harlequin to lay down again with roots covering her body as she continues her eternal slumber. And once all sand has dropped, the hourglass suddenly transforms into the rotten apple which Isabel then eats with creepy, vampiric vigor. Eventually she drops the apple to the ground and from there the apple grows healthy, green leaves and so the video ends.
The video features many visual references to what I believe are classic fairytales, including Snow White, Beauty and the Beast, Rapunzel and Sleeping Beauty. The passage of time is also a prominent theme as well as the power of nature to reclaim its grounds after the humans have passed away.

8,5 fairy tales out of 10. A unique tango dance song in Fabulae Dramatis’s avant-garde repertoire that has now received its proper music video which, in typical Fabulae fashion, oozes with color, beauty and mystery. Enjoy the music video.