It grooved from Mars 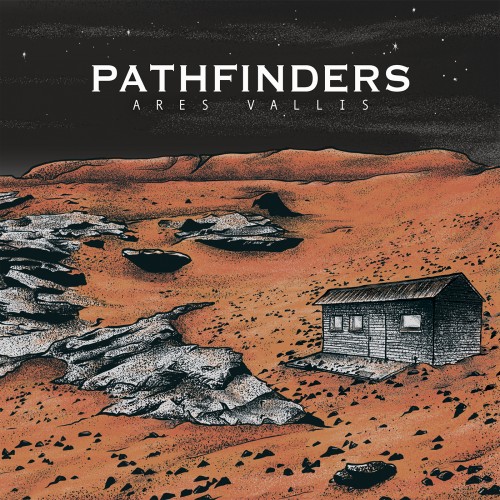 Hailing from Fontainebleau, France, groove metallers Pathfinders unleash their debut onto the world. The band formed in 2018 and consists of the Gaucher brothers Jérémy (bass) and Romain (guitar) as well as Jérémy Barthélémy (drums), Benjamin Daguet (guitar), and Clément Levy (vocals). They named the band after the NASA probe Mars Pathfinder. In keeping with that theme, their debut's title “Ares Vallis”refers to an outflow channel on Mars. Their debut single “Imposters” managed to catch my interest, so I decided to gave this album a go.

In honor of the Mars probe, the first track is called “Landing.” Ambient tunes accompanied by a voice track detailing the landing. Then, without warning, we're introduced to the second track called “Imposters.” The guitars create an eerie landscape and the vocals immediately remind me of Spencer Sotello of Periphery fame. While Clément tries his best to emulate that voice, but sometimes it just doesn't work. His high-pitched distorted screams aren't strong enough to pull it off.

“Damned Earth” starts with a monstrous groove. Lyrically, it deals with mankind ruining the planet we live on. “Evolution” is a more hardcore-tinged groove beast. While not a bad song in itself, it doesn't bring anything new to the table. The high-pitched delivery of the chorus was a turn-off for me, personally. Fifth song “Precious Star” has a catchy chorus with clean vocals. It reminds me of a modern Gojira in places, musically. The band brings a little In Flames feel mixed with Killswitch Engage for “Explode Inside.” The recognizable guitar “squeaks” are strongly represented here.

“Annihilate Them All” brings an insane groove. To me it's like an amalgamation of all those New Wave Of American Heavy Metal bands which were prominent in the early 2000s. At times it reminds me of the band Chimaira, which is not a bad thing in my book. “The Light” is a standout track on the record and shows a more mellow side of the band. Musically it's a great track, but in my opinion Clément's voice isn't strong enough to give the song that extra push. A shame, because the atmosphere and background vocals are superb.

Back on track with “Pressure.” It featuring staccato riffs and metalcore leads on guitar. Vocal-wise there's some Anders Friden-style crooning, distorted screams and a deep grunt. I feel that musically the song is all over the place, which makes it feel a bit incohesive. “Ghosts Of Mars” is a groove monster. It reminds me a bit of Threat Signal. It has a huge bass sound, so that's a win for me.

“Bad Guardians” is a track to get the pit going, for sure: fast paced, with riffs reminiscent of Lamb Of God. The Spencer Sotello-style crooning works very well in this song. There's a lot of variety in here. The groove-filled breakdown at the end had me bouncing on my chair. “Peste Noir” is the 8-minute closing track on this album. We get treated to groove, great melodies, a mellow section in the middle building towards a big guitar solo. The track ends beautifully with strings and a repeating piano tune, telling us our journey is over.

The artworks stays with the theme, and shows a Martian landscape. There is a cabin on the surface, which may be a reference to mankind's dream to settle on the red planet.

This album brought me back to the early 2000s musically. The groove section on this record is massive, which really helps the record to maintain that big sound. In my opinion, the band was a bit too driven to include all their influences in their songs which makes it incoherent at times, for example on “Pressure." I think the albums' length is also a problem. It demands your attention for 54 minutes, but it isn't strong enough to do so.

The other working point for the band would be the vocals. Clément is clearly trying to emulate Periphery's vocalist Spencer Sotello, but he doesn't quite reach that level. Especially when it comes to the high-pitched stretched screaming. It hurts the material at times. However, for “Precious Stars'' he shows off clean vocals which I wished he utilized more instead of the high screams. And it's admirable that he wants to use different vocal pitches, most of them do hit the spot.

My favorite tracks are the two monsters called “Annihilate them all” and “Ghosts of Mars”.

All in all, Pathfinders have made an impressive groove metal debut, and I will definitely keep an eye out to their next effort. I rate this album a 7/10.