How can you believe? 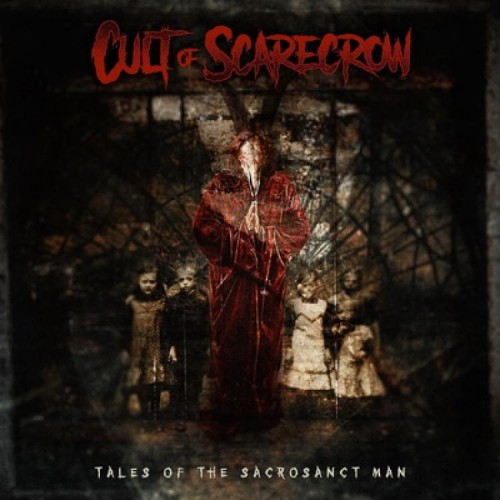 I first heard of Cult Of Scarecrow during the pre-selections for the 2019 Wacken Metal Battle Belgium contest in 2019. The band made it to the semi-finals in JH Asgaard where they gave a solid performance which left a positive first impression on me. While the band didn’t make it to the finals, I did feel Cult Of Scarecrow had great potential which was further proven by their successful eponymous debut EP (read our review here: https://www.belgianmetalshredder.be/reviews/167). Cult Of Scarecrow has now invited us to shred through their upcoming second release, which we are more than willing to do.

“Tales Of The Sacrosanct Man” is the upcoming first full-length of the Belgian epic doom metal band Cult Of Scarecrow and is currently exclusively available in the Benelux via Sounds Of Hell and will be released worldwide via WormholeDeath on September 10th. The album was gifted to us personally by the band during their gig at the Into The Arena festival last weekend as well as via a pre-listening stream provided to us by Sounds Of Hell.

The album begins with its debut single, “Sacrosanct Men” and its riffs instantly felt familiar to me since I’ve been a lover of Cult Of Scarecrow’s sound since the beginning. But the band shows a different side of them with the next tune, “Lazarus,” which puts greater emphasis on piano and orchestra. This tune feels quite a bit like classic Ghost, although heavier (and therefore more fun to me). “Robotized” is another guitar-driven tune and one of the hardest hitting songs on the album thanks to the pounding drums and aggressive vocals. “Pitch-Black” is a menacing song with droning guitars backed by the sound of rain, the track does get gradually more intense (aside from the already explosive chorus).

“Doorkicker03” begins with some samples (mainly about mass shootings) and then leads into another heavy and attention-grabbing tune. “This Blood’s For You” opens with church organ and chants and then smoothly marches on with the usual Cult Of Scarecrow beats. “Sameness” feels like a creepy lullaby, further amplified by the sounds of crying babies and tickling music boxes at the start. And finally there’s the doom-inspired “ballad” called “Own Worst Enemy.” This final track begins with keyboards and pianos and becomes faster and more hectic as the song progresses until one last, lengthy guitar solo makes the album fade to black.

While Cult Of Scarecrow’s self-titled debut EP had its moments it was also cluttered with long, dragged-out opening and closing sections. Fortunately, the band has learned from this flaw. The songs on “Tales Of The Sacrosanct Man” are significantly shorter and more tightly written which results in Cult Of Scarecrow’s strengths becoming much more visible. The band still employs seductive vocals (surprisingly catchy at times) and roaring riffs backed by operatic keyboards and well-timed drums, just like in their 2018 EP. Some tracks still have opening samples but they are much shorter this time around so that the meat of the songs comes around faster. In addition, the band now puts more emphasis on guitar melodies and both guitarists play several truly beautiful solos throughout the album. And finally Filip’s vocals are often well-backed by the other members or by effective use of echoes. Simply put, the orchestral doom of Cult Of Scarecrow is now fully formed for us all to behold.

“Tales Of The Sacrosanct Man” features the title character, dressed in red robes, a goat skull and praying towards the camera while being surrounded by sad-looking children. I like the fact that the Sacrosanct Man is the only colored and bright character in the entire image (as well as the band’s blood red logo). It’s artwork that beautiful in its simplicity.

Themes on “Tales Of The Sacrosanct Man” deal with such dark topics like war propaganda, depression, worldwide destruction, dystopian societies and crippling uncertainty. The Sacrosanct Man represents a demagogue who, like his real-life religious and political counterparts, uses specific rhetoric to encourage violent and (self-)destructive behavior among the masses. The band, however, does have a few songs, like “Lazarus,” that motivate you to take your life back in your own hands.

A big favorite of mine is the album’s second track “Lazarus.” I love the piano sections jamming together with the beautiful guitar solos and the cinematic choruses. This song comes right after the “Sacrosanct Men” song that featured the usual Cult Of Scarecrow sound but, “Lazarus,” on the other hand, showed me that Cult Of Scarecrow has got a couple extra creative tricks up their sleeves. Other favorites include the aforementioned great “Sacrosanct Men” opening track, the apocalyptic grimness and haunting chorus of “Doorkicker03,” the creepiness of “Sameness” It’s quite difficult to pick a weak track here.

All tracks on “Tales Of The Sacrosanct Man,” while pretty different from one another, still maintain enough consistency to be just as enjoyable as the others. Maybe a short instrumental opening or ending? Or both? That’s all I can think of.

9 Sacrosanct Men out of 10. While their debut EP had already hinted at Cult Of Scarecrow’s potential, their new album shows their strengths in full force with tighter and more varied songs. Jamming guitars, operatic keyboards, supportive drums, hypnotizing vocals and a overlapping sense of darkness! I may not be the biggest doom metal fan around, but I sure like this sacroscanct cocktail!