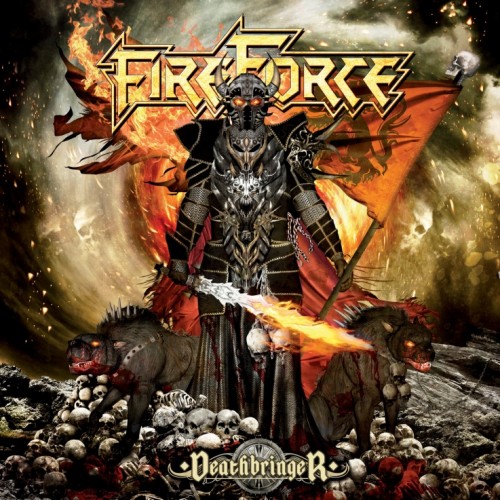 FireForce’s first album, March On, was a very fun album for me to listen to. After hearing this album’s title track on YouTube, I had heard more than enough to know that FireForce’s second full-length album would be just as awesome as the first one, but I was wrong. Yes, I was wrong, because Deathbringer is an even better album than March On. It takes everything that made March On great and improves it in every single way. Even more epic guitar riffs, harder hitting drums, catchier lyrics and Flype giving even more than his all with his vocals. Hell, from time to time he successfully goes for a bit of Rob Halford-like banshee screaming. And that despite the fact that the entire line-up (except for Flype and Erwin, the founding members) is completely different from the first one. But you only need to hear the first track and you’ll know that the changed line-up is anything but a bad thing!

In case you don’t know FireForce, they play combat metal. I personally would describe it as having the themes from power metal with significantly more heaviness than that aforementioned subgenre. It isn’t a revolutionary new thing, it’s old-school, fast-paced heavy metal not too different from Ostrogoth, another awesome Belgian heavy metal band you’ve probably (and should have) heard about. For many of the album’s tracks, especially the first four tracks, the band goes on an epic high-speed, high-impact gallop. At around track five “To the battle,” the band slows down quite a bit, but still keeps things heavy and straight, as they should. Personally, I do prefer the faster tracks, simply because you can feel the band’s true strength flowing when they play these songs. When I listened to the penultimate track MN29 for instance, I felt that the band weren’t in their natural habitat. It felt a bit forced, so for the next album, I highly recommend them to just play at supersonic speed for the entire album.

The album’s themes are very similar to those from the first one. Medieval and WWII warfare, Egyptian mythology, love and sex as well as celebrating the metal subculture itself are the main themes featured in Deathbringer’s track list. Eventually finishing off with a sweet cover of the Tygers of Pan Tang’s song Gangland. So there's plenty of variety when it comes to themes. I did, however, wish that they had written a song about a subject that’s hardly been sung about in metal. The previous album, for example, had a song written about the life of Leonardo Da Vinci! Maybe in the next album, FireForce can sing about some of our own famous painters, like Rubens, Bruegel or the Van Eyck brothers. That way I’ll have that same patriotic boner again as I had while listening to 1302 – Battle for Freedom (about the Battle of the Golden Spurs), which is another track from the March On album.

Deathbringer’s artwork is significantly better than March On’s. That album had a nice cover, but it didn’t suit the band’s style and their lyrical themes at all. This album’s cover, however, features a badass knight (correction, it’s a Deathbringer) standing atop of a skull-filled hill surrounded by a sea of fire and with the Flemish lion waving proudly in the background! The inside cover features pictures from the band members in a decor of hell, fire and brimstone. Fine, FireForce’s themes aren’t about fire or hell itself, but trust me, the band has more than enough fury in them to set your heart on fire!

Deathbringer’s title track certainly is my favorite track on the album. As I already mentioned, it’s the opening track and it does exactly what every opening track should do. A powerful introduction that makes you hungry for more! Thunder will Roll comes out as a very close second. The song has that typical catchy FireForce style and you’ll shout WARRIORS along with the band in no time. And when performed live, it’s even better!

8,5 Deathbringers out of 10! Did you like March On, then go get this one! If you aren’t familiar with FireForce and if you’re looking for a rock-solid guitar shredding thrill, then go get this one (and the previous album as well)! If you need proof that Belgian metal can kick some serious ass, go get… well, you probably know what I was going to say there. Nuff said, go get this one!