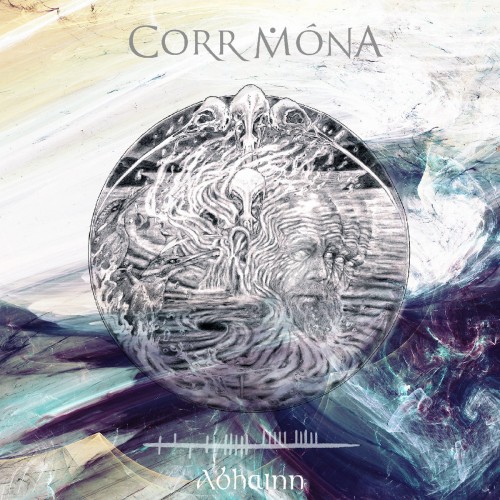 Irish metal band Corr Mhóna sends us their own work. Signed to record labels Satanath Records & Negre Plan Y, their latest album "Abhainn" (pronounced Owh-ing) offers a unique blend of traditional Irish elements like Celtic horns and harmonizing vocals alongside screams, growls and some of the finer elements of death, doom and black metal. The songs are all named after rivers in Ireland. Oh, and the entire album is in Gaelic. Color me intrigued.

The album’s first track, “An Fheoir” leads you gently into this latest excursion of Corr Mhóna. The horns startle you into alertness before multiple voices harmonize and weave a pattern together, instantly reminding me of the vast green spaces of the band’s native Ireland. This intro progresses into “An tSúir,” a Mastodon-like opening with searing guitars carrying you off to traverse the second Irish river on their repertoire. This two-and-a-half minute song consists mostly of ringing guitars and pounding drums. “An Bhearú” opens like a punk song, but then it quickly changes back to clean vocals harmonizing over an almost trash-like drum. And then the black metal screams take over and you’re not quite sure where you are, but this isn’t Kansas anymore, Toto.

As the songs are in Gaelic, you’re almost forced to take the lyrics to hand to understand what these guys are trying to say. To be honest, I’m not sure whether I like or dislike that. It certainly adds some mystery to their songs and you pay much more attention to the music and the emotions conveyed in speech and instrument. But on the other hand, if you’re looking to derive meaning without the translated lyrics, you might miss the message of the album, which is clearly there. In fact, the lyrics of the first songs are quite political and carry a strong societal message. So to have these words literally lost in translation seems a shame.

“An Laoi” is raging and angry, the first few notes immediately making it clear that this is a black metal song through and through. These are the words of a tormented man, crushed by the world. I know this, because the lyrics told me when the music could not. This song is dark and carries a lot of pain. Though not a black metal fan myself, the lyrics really bring this one home for me. I’m glad the band took the time to translate their words for this one. The clean harmonies in “An Laoi” give it a haunting and haunted quality. This song is 8 minutes long and, for me, overstays its welcome. But I’m pretty sure someone who’s a bigger fan of the genre would appreciate this song.

Next up is “Banda,” which talks about being led astray by those around us and freeing ourselves from their onslaught to be “pure and whole." Again, the band chooses black metal vocals to set the tone. The guitars are fast and furious and the drums blend it all together to a coherent whole. After an intense opening, the song slows down to what sounds almost like the metal version of an old folk song. The vocals are catchy, even if you don’t know what they’re saying. It doesn’t take them very long to travel back to black metal paths, though, guitars and drums speeding up to a maddening pace. Like eb and tide, black and folk metal blend and weave, trading places constantly. At a little over four minutes, the band abruptly stops, before returning with a single guitar playing in nature, quietly reminiscing while giving us the time to contemplate what came before. Then the chorus returns, but not as it did before. With over eight-and-a-half minutes of runtime, this song is many things at once and yet still a single sound.

“Cumar an Dá Uisce” opens with a single guitar, a harp-like instrument and a streaming brook. It feels like the band is taking a little breather, just enjoying the things they see around them and relaxing in nature. If this instrumental feels like it is building up to something, well… “An tSláine” feels almost like a stoner rock song, bass and guitars carrying squealing guitars before the harmonies jump in. Again, there’s a blend of black metal screams with clean vocals and an occasional death metal growl. This song describes a warrior, chosen by a liege lord or perhaps a higher being. But after the battle is fought, this hero is in disgrace. Interesting allusion to what always happens in history: the story is written by the victors. The guitars almost feel like they’re crying out and somewhere in there I swear I could hear the sound of many boots trampling the ground. And then there’s the angry liege crying out, a voice almost tinged with madness, before harmonies and guitars carry the battle home.

“Uaimh” is another instrumental interlude. The whispering voices are never clear enough to make out and the water sounds like it’s dripping in a cave somewhere deep underground. The song leaves you behind with a feeling that you’re not quite sure what just happened. “An tSionainn” starts out with harmonies singing about the balance of life and its extremes: “love without grief”, “grief without love” and seemingly all things in between. The guitars then take the song forward to almost ritualistic chanting. As I’ve come to expect from these guys, the black metal vocals quickly find their way back into the vocals. They are offset by cleans constantly, the harmonies weaving through the music to soothe the rawness of the screams. The ritualistic element returns frequently, too, adding an extra layer to the song. I really like the harmonies at the end of this song, they are just a unique kind of haunting.

The final song is “An tSuláin” and try as I might, I can’t find any mention of it in the booklet provided, outside of its listing in the track list on the last page. All others, including the instrumentals, have a spot in the booklet, so this struck me as a bit odd. The song itself puts me in mind of a good doom song, the opening drawn out with awesome guitar work. The solo work is also excellent. The electric guitars disappear and we are welcomed by two acoustic ones, meandering over a brook and once again having a soothing effect after the brutal assault that came before. If not for the piercing scream mid-song, you could happily lose some time there. But the doom-like guitars are back, pulling you ever forward on Corr Mhóna’s stream, like all rivers leading to the sea. And at the end of this final song, we hear that sea, with warbling birds singing their own song overhead. And so, you are gently swept away, leaving Ireland on a distant shore.

Corr Mhóna commissioned Dublin-based artist Mairead McGuiness to draw several images representing the rivers and moods from the album. For the cover, this has translated into a moody ocean in the background, with faces of man and bird incorporated into a central circle. I imagine there is a storm raging in that ocean, and the faces look old and almost frightened. There are more things to discover every time you look and I’m sure it is open to many different interpretations.

This album to me is about the harmonies. The music is great, these are clearly skilled musicians, but the parts that really stuck with me are the ones featuring those harmonizing voices. So picking a favorite song is difficult, as these vocals return over and over again on the album. If I had to choose, I’d say the harmonies at the end of “An tSionainn” are my favorite.

How to score this album? There’s so much going on there and even as someone who’s not immediately drawn to black metal screams, I can enjoy this album. The variety of the music sets it apart and makes it either an acquired taste or something unenjoyable. That might sound harsh, but it just seems to me that it takes a particular kind of person to enjoy this record. If you’re more into straightforward black metal or you like your music to stick to certain patterns, then this is not the choice for you, my friend. However, if – like me – you want to expand your horizon and try a new flavor that has a little bit of everything, but with a strong black metal twist, then Corr Mhóna’s "Abhainn" should definitely be on your list. Hell, let’s score this one at 7,5/10. Well worth a try.